Fight over Resolution Copper Mine drags on

Both sides expect the fight to continue by Elsa Hortareas, Cronkite News Tweet 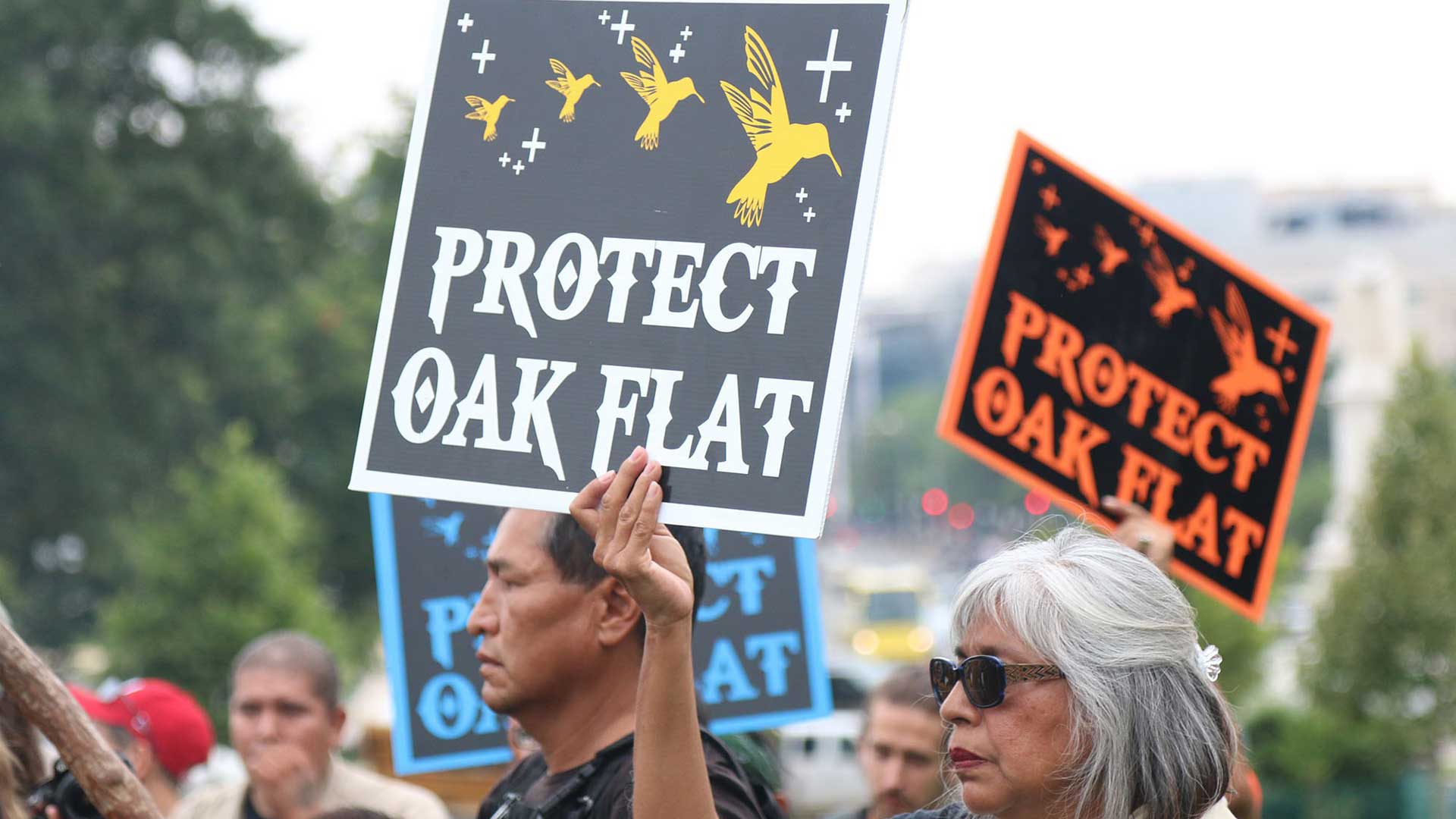 Protests against the Resolution Copper mine near Oak Flat have been going for years, as shown in this 2015 file photo from a rally at the Capitol.
Jamie Cochran/Cronkite News

An Aug. 8 Cronkite News story about the fight over the proposed Resolution Copper mine misstated the amount of copper the mine can produce. The company estimates the mine could produce up to 40 billion pounds of copper over 40 years. Additionally, the story misidentified the mayor of Superior. Her name is Mila Besich.

Superior Mayor Mila Besich comes from a family of miners, so she knows it takes a long time to open a mine. But even she is getting frustrated by the years of reviews and court challenges to the proposed Resolution Copper mine.

“The Resolution Copper project is a very important piece of our community’s economic development,” Besich said recently. “Mining has always been a part of our economy and our community.”

The nearby Magma copper mine closed in 1996 and Resolution moved in in 2004, promising to bring thousands of jobs and hundreds of millions in salary back to the area by exploiting what has been called one of the world’s largest undeveloped copper deposits.

Critics say it will bring more than that.

They say the mine will leave behind a 1,000-foot deep crater almost 2 miles across, dump millions of tons of toxic mine waste, threaten area water supplies, destroy land that is sacred to the Apache and ruin habitat relied on by hundreds of species, some endangered.

“What do we as the American public get, except for another toxic dump and loss of water when we are really struggling to get water?” asked Robin Silver, co-founder of the Center for Biological Diversity, which has been one of the leading opponents of the mine.

Lawmakers, federal regulators, and courts have been grappling with those questions for years – and both sides agree that the debate is likely to continue for years to come.

Resolution has been looking to mine the site since 2004. But it was not until 10 years later that Congress approved a measure – attached by Sen. John McCain as a last-minute amendment to the must-pass defense funding bill – that let the government swap 2,422 acres of federally owned land in southeastern Arizona with Resolution, in exchange for 5,344 acres in the area.

That started seven years of environmental and archeological review by federal regulators who unveiled a final environmental impact statement that would have allowed the land transfer to go through.

That statement was released on Jan. 15, 2021, just days before President Donald Trump left office, and would have taken effect in March. But critics sued to block the plan they said was rushed through, and the new Biden administration ordered the impact statement pulled back for additional review and consultation with tribes. That review is still going on.

“This was pretty much signed, sealed, and delivered before Biden got into office, and it got to a complete halt,” said Rick Cartier, vice president of the Superior Chamber of Commerce, and a backer of the mine.

But federal regulators were far from the only thing standing in the way of the mine. Tribal and environmental groups have repeatedly gone to court to challenge the project.

The most recent court ruling was handed down in June. That’s when a divided panel of the 9th U.S. Circuit Court of Appeals rejected claims by the group Apache Stronghold, which said the mine would interfere with their right to worship at Oak Flat and the nearby Apache Leap and Devil’s Canyon, sites the group said have long been sacred to the tribe.

The court also rejected Apache Stronghold’s argument that the government was obligated to preserve the land under an 1852 treaty with the Apache. 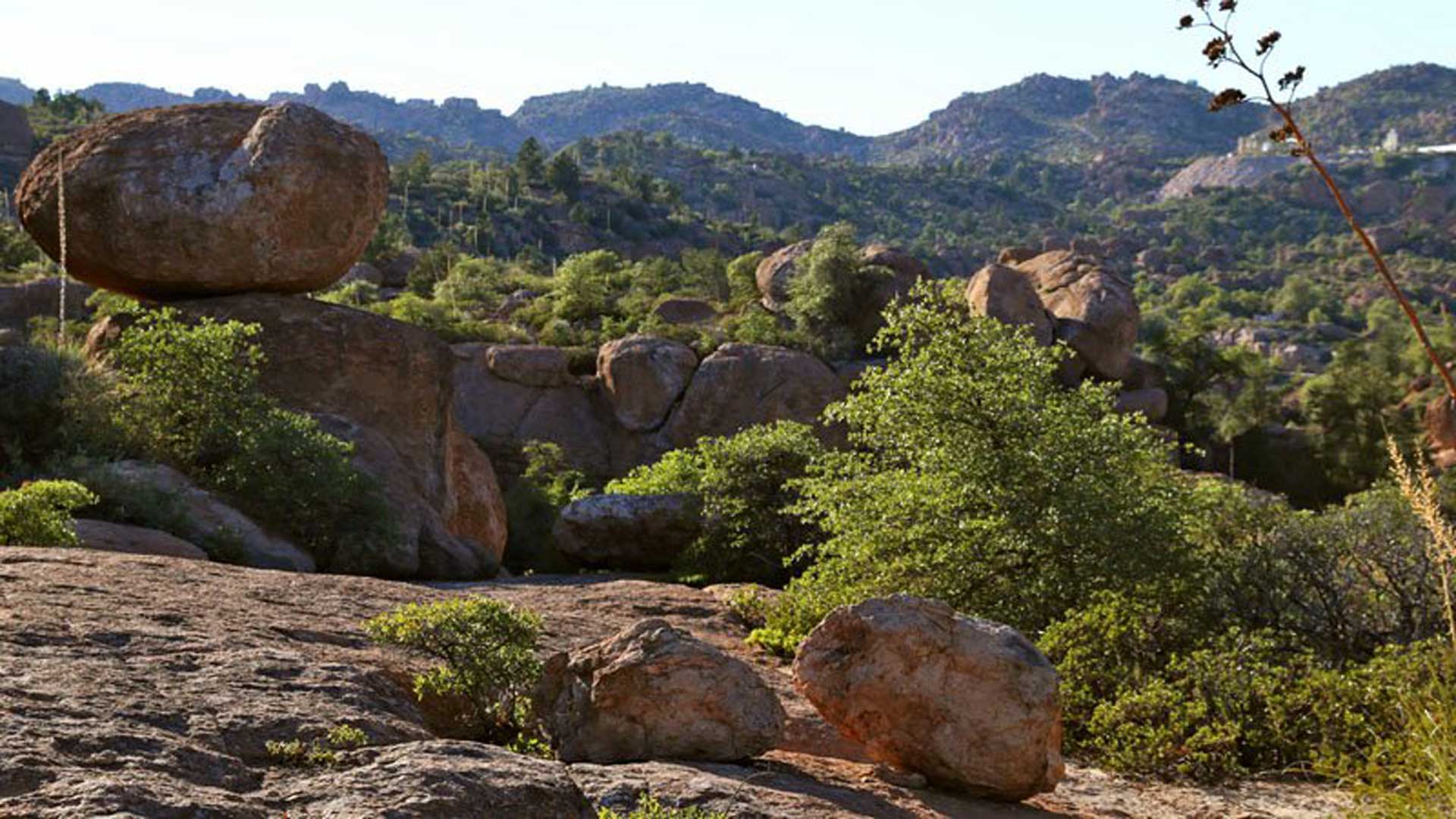 Oak Flat, near where a copper mine is proposed, is dotted with rugged boulders and desert vegetation.
Bri Cossavella/Cronkite News

A majority of the panel said that even if the mining of Oak Flat “does make it ‘impossible’ for Apache Stronghold’s members to worship” there, that does not rise to the level of a “substantial burden” on worship that the group would have to prove to get the injunction they were seeking.

“The government makes exercises of religion more difficult all the time. Doing so is not inherently coercive,” said the opinion by Circuit Judge Carlos T. Bea.

In a dissent, Circuit Judge Marsha Berzon said the majority reached an “absurd result: blocking Apaches’ access to and eventually destroying a sacred site where they have performed religious ceremonies for centuries does not substantially burden their religious exercise.”

An attorney with the Becket Fund for Religious Liberty, one of the groups that represented Apache Stronghold in the suit, agreed with Berzon.

“It is disastrous for Native American religious exercise more generally, and it is bad for people of all faiths,” said Joe Davis, the Becket Fund attorney.

But Resolution Copper said in a statement that Apache Leap will be protected under their latest agreement with federal regulators. And it noted that it has had hundreds of consultations over several years with 11 tribes, which led to changes in the project that it said are designed to protect cultural sites in the region, including springs, plants, and ancestral sites.

The company also said that the U.S. Forest Service has “shaped” the Resolution mine proposal in 11 years of rigorous environmental review.

“It’s appalling that something like this would take this long,” Cartier said,

Resolution claims that, at full production, the mine in Superior would create up to 3,700 direct and indirect jobs, with an annual payroll of $270 million. The company says the mine could produce up to 40 billion pounds of copper over 40 years, making it the largest copper mine in North America.

“One of the frustrations for the people of Superior is that … the story of this town being a town with a world-class mine and contributing to the global economy, that story does not get told,” Besich said.

Cartier said the mine, which currently employs 300 workers, has all the infrastructure in place ot start work, but “The key is when they actually start mining.” But that could still be years away.

“It could be another 10 years. It could be five to 10 years, and it is only because somebody else will file a lawsuit,” Cartier said.

Davis said Apache Stronghold is already preparing an appeal of the 9th Circuit ruling. At least two other lawsuits that challenged the government’s approval of the mine were put on hold when the Biden administration pulled back the environmental impact statement for more review last year.

And bills to reverse the Oak Flat land transfer were introduced in both the House and Senate last year. The House bill, introduced by Rep. Raul Grijalva, D-Tucson, got out of committee but has not received a floor vote. The Senate bill has yet to get a hearing.

Besich is confident the mine will open eventually, but she is getting tired of the wait, even though she concedes that approving a project like this “takes decades, especially when you are dealing with federal land.”

“My people are held in this political volleyball, and that is what is getting very frustrating,” Besich said.

Apache Stronghold has until Sept. 22 to appeal the case to the Supreme Court. In the meantime, Besich said, all that supporters can do is wait.

Conservationists file notice of intent to sue EPA over Queen Creek mining waste Apache Stronghold files emergency appeal in Oak Flat case Apache Stronghold files appeal in fight over Oak Flat
By posting comments, you agree to our
AZPM encourages comments, but comments that contain profanity, unrelated information, threats, libel, defamatory statements, obscenities, pornography or that violate the law are not allowed. Comments that promote commercial products or services are not allowed. Comments in violation of this policy will be removed. Continued posting of comments that violate this policy will result in the commenter being banned from the site.