× CORONAVIRUS: The latest coverage and local resources regarding COVID-19 from the Arizona Public Media newsroom.
June 12, 2019

On stressed Colorado River, states test how many more diversions watershed can bear

The river is running short on water, and this is pushing some states to tap into every available drop before things get worse. by Luke Runyon, KUNC TWEET SHARE 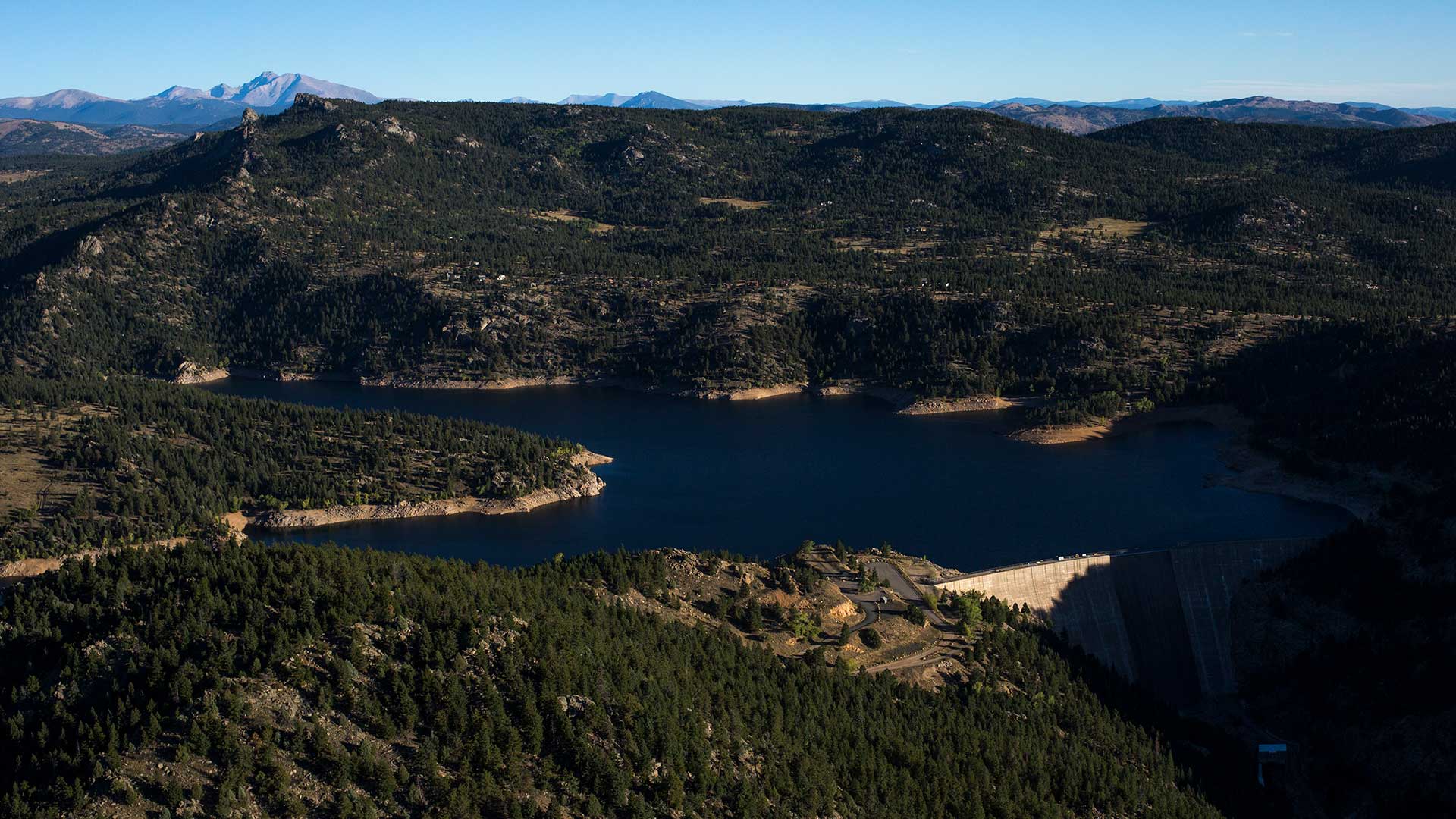 Gross Reservoir is a key piece of Denver Water’s delivery system. A proposal to expand the dam that holds up the lake has galvanized opponents who live near it.
Nick Cote for KUNC/LightHawk

The Colorado River is short on water. But you wouldn’t know it by looking at a slate of proposed water projects in the river’s Upper Basin states of Colorado, Utah and Wyoming.

The river and its tributaries provide water for 40 million people in the Southwest. For about the last 20 years, demand for water has outstripped the supply, causing its largest reservoirs to decline.

In the Bureau of Reclamation’s 2012 Colorado River Basin Water Supply and Demand Study, you can pinpoint when the lines crossed somewhere around the year 2002. It’s a well-documented and widely accepted imbalance.

That harsh reality — of the river’s water promised to too many people — has prompted all sorts of activity and agreements within the seven Western states that rely on it. That activity includes controversial efforts in some states in the Colorado River’s Upper Basin to tap every available drop before things get worse.

“There's nothing that we get from this”

We stop at an intersection, near an electrical provider and across the road from a community center. It’s a sharp, almost 180 degree turn from the main highway onto the road to Gross Dam.

The utility that owns the reservoir, Denver Water, wants to increase the size of the dam by 131 feet, and fill the human-made lake with more water from the headwaters of the Colorado River via a tunnel that traverses the Continental Divide.

“If they truck all of this material up our canyon, people in our community are gonna get killed by those trucks. Period,” Long said. “There's a lot of other issues here but the safety thing should really be a serious priority.”

Long and his wife, April Lewandowski, live near the reservoir in a community called Coal Creek Canyon. Like many of her neighbors, Lewandowski commutes from the sparsely populated canyon to her job on the state’s dense Front Range. Her daily commute on the canyon’s two-lane highway is the same as a haul route for trucks needed to build the dam addition. 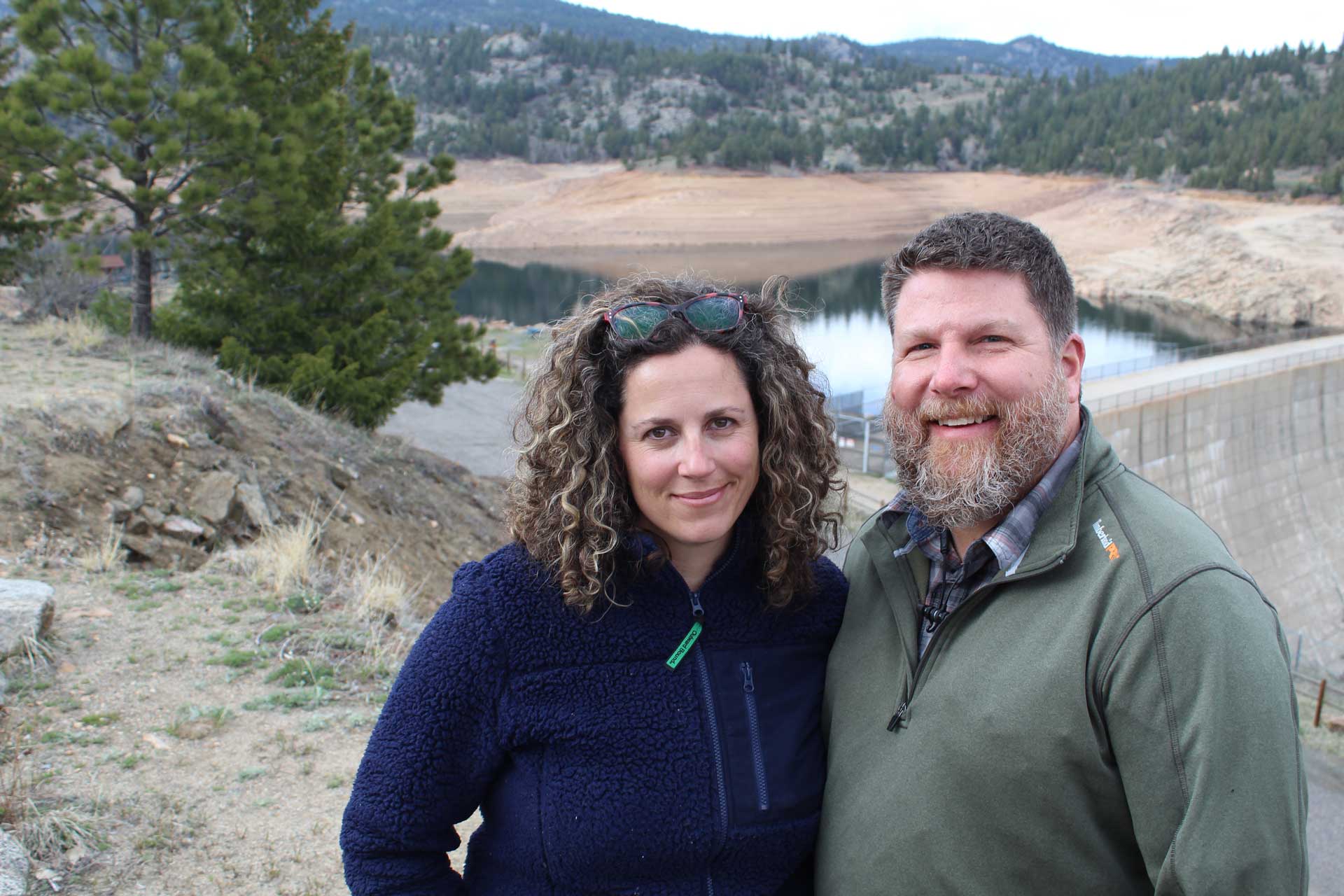 Long pulls up to a small parking area that overlooks the dam. It’s a deep wall of concrete, stretched between the tree-lined canyon walls of South Boulder Creek.

“I mean you look at how the land splays out, you can see why they want to (build it),” Long said. “It’s so much wider all the way around.”

If the expansion goes through, the place where we’re standing will be submerged in water. The addition to Gross Dam will raise it to 471 feet in height, making it the tallest dam in Colorado.

The project worries Long and Lewandowski. They’re concerned about the safety of people who commute down the canyon each day, and will have to compete for road space with massive trucks. They wonder what effect the five years or more of construction could have on the value of their home. They want to know how they’ll be able to keep a water agency of appointed officials accountable to promises made.

“We don't vote for them or fund them,” Lewandowski said. “There's no way that we can have a voice. There's nothing that we get from this. We don't get the water from it. We've never been told we were gonna get a better road or a wider road.”

“This is a project that's needed today”

Denver Water first started taking an expansion of Gross Reservoir seriously after the dry winter of 2002. Exceptional drought conditions took hold across the Mountain West. The utility’s CEO, Jim Lochhead, said in the midst of those historic dry conditions, a portion of its service area nearly ran out of water.

“This is a project that's needed today to deal with that imbalance and that vulnerability and to give us more drought resiliency,” Lochhead said. 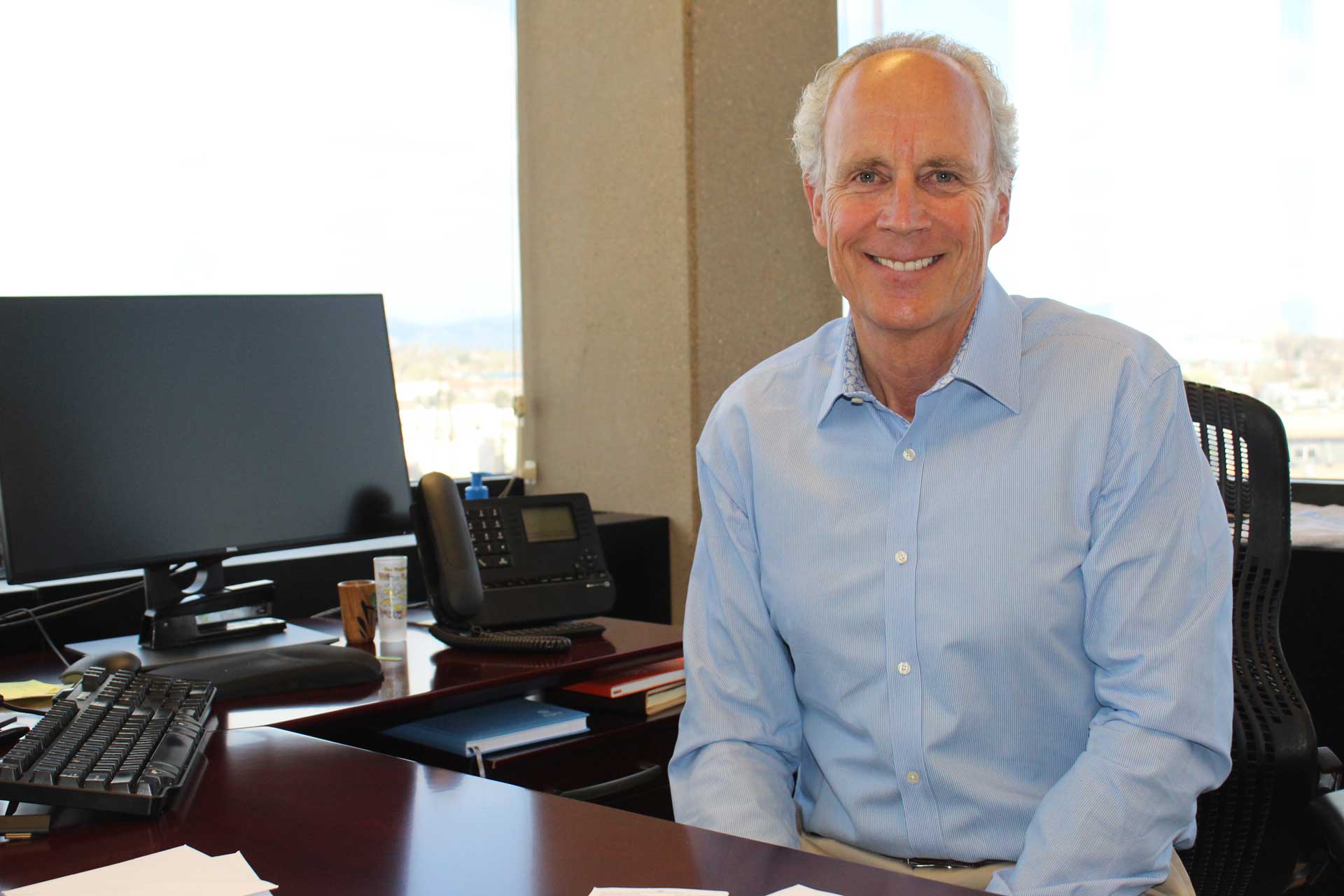 Since then, Denver Water has filed federal permits to start construction, and negotiated an agreement with local governments and environmental groups on the state’s Western Slope to mitigate some effects of the additional water being taken from the headwaters.

Before leaving office, former Colorado Democratic governor and current presidential hopeful John Hickenlooper threw his weight behind the project, giving it an endorsement and suggesting other water agencies in the West take notice how Denver Water approached the process.

But despite the political heft behind the project, it faces considerable headwinds.

Environmentalists are suing, arguing the expansion will harm endangered fish. A group of local activists say the additional water will spur unsustainable population growth along the state’s Front Range. In recent months, the utility began sparring with Boulder County officials over whether they were exempt from a certain land use permit.

Building a 131-foot dam addition does come with baggage, Lochhead said. But he argued his agency has done its part to address some of the concerns, like reducing the number of daily tractor trailer trips up Coal Creek Canyon and planning upgrades to the intersection where trucks will turn onto Gross Dam Road.

“It is a major construction project. I don't want to gloss over that. It will have impacts to the local community,” Lochhead said.

“We are committed to the project and seeing it through. We're also committed despite the opposition to working with the local community in doing this the right way,” he said.

“There really isn't unused or excess water out there”

The latest scuffle with Boulder County has brought the Gross Dam expansion squarely back into public view. At a county commissioner’s meeting in March, residents criticized Denver Water on all fronts, from specific concerns about the construction itself, to broader concerns about water scarcity in the Colorado River basin.

“No one wakes up in the morning and says, ‘Gee I hope there will be a seven-year dam construction project in my backyard,’” Anna McDermott said at the hearing. McDermott lives near the banks of Gross Reservoir.

“This project represents an effort by Denver Water ... to actually grab water while they can, before federal legislation and management of the Colorado River Basin is imposed,” McDermott said.

What McDermott is referring to is a stark disconnect in the Colorado River watershed. States downstream on the river — Arizona, Nevada and California — signed a new agreement in May called the Drought Contingency Plan that keeps them from becoming more reliant on the Colorado River. It requires cutbacks to water deliveries should levels in Lake Mead, the river’s largest reservoir, continue to drop.

Meanwhile, upstream in Colorado, Wyoming, Utah and New Mexico, no such agreement was made. Those states wound up agreeing to study the feasibility of a program that would compensate farmers to stop irrigating their cropland if reservoirs dropped, with no solid way to pay for it. They agreed too to better coordinate releases from their biggest reservoirs to aid an ailing Lake Powell. While they figure out how to develop those two concepts, the Upper Basin states keep inching along on their development projects to divert more from the river.

The 1922 Colorado River Compact, the river’s foundational governing document, gives Upper Basin states the legal cover to continue developing projects like the Gross Reservoir expansion. In the compact, each basin is allocated 7.5 million acre-feet of the river’s water. Over the decades the rapidly growing and intensely farmed Lower Basin has used much more than that. The less populated Upper Basin has never reached its full allotment. Those state have been using roughly 4.5 million acre-feet for the last 13 years, with the rest flowing downstream for the Lower Basin to use as it sees fit. 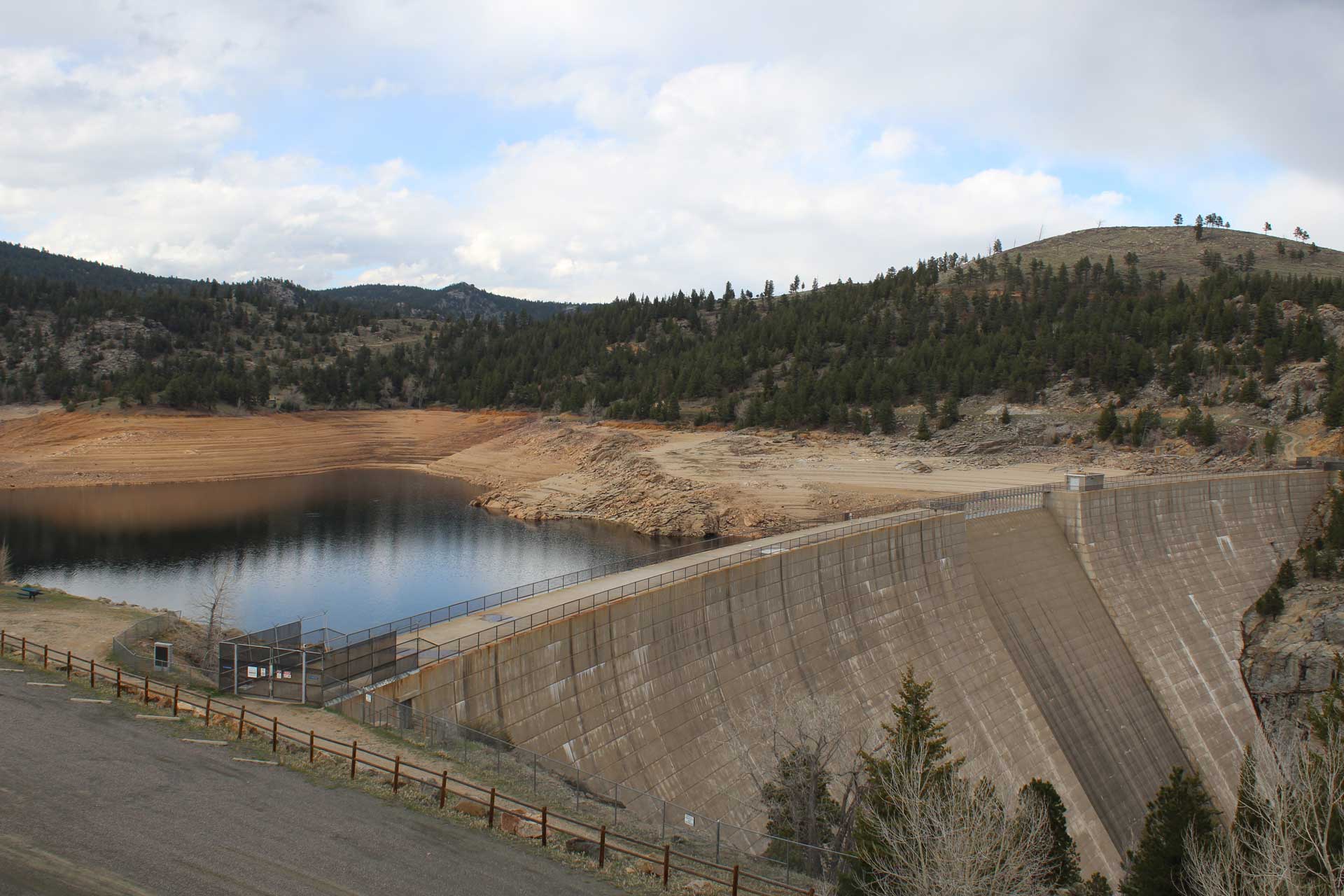 VIEW LARGER Denver Water wants to raise Gross Dam by 131 feet. If completed, the dam would then be the tallest in Colorado.
Luke Runyon/KUNC

Proposed water projects like the Gross Reservoir expansion are an attempt to even the score, even if they add some additional pressure to the overallocated resource, says Doug Kenney, an expert on Colorado River policy at the University of Colorado Boulder. (Some of Kenney’s work has received funding from the Walton Family Foundation, which also provides funding for KUNC’s Colorado River coverage.)

“There really isn't unused or excess water out there and so every new water project we build is undercutting the reliability of every other water project we've already built,” Kenney said.

The additional water that will end up in Gross Reservoir — if the dam expansion goes through — will have to come from somewhere.

“They might have in the back of their mind this thought that this is something that will make up for elsewhere in the basin through another mechanism,” Kenney said. “And if that happens then it all looks very reasonable. But if it doesn't happen then this doesn't look very reasonable.”

Water managers are able to look at the entire Colorado River watershed and recognize its fundamental supply and demand imbalance, Kenney said, and still find ways to siphon off new supplies in smaller pockets. It’s one of the conundrums of Colorado River governance. No one agency or commission exists to think of and manage the system as a whole.

Conservation programs tend to be less expensive than massive new projects, Kenney said. But additional water supplies stored in reservoirs give more security and reliability. It’s why water leaders push for them, even when the economics don’t make sense.

“I used to think the limiting factor would be the economic cost to these projects, but currently there is little evidence to suggest that's what stops these things,” Kenney said. “It's politics and it's how well-mobilized the political opponents are to these projects.”

This story is part of “The Final Straw,” a series produced by the Colorado River Reporting Project at KUNC, KUER and Wyoming Public Radio. KUNC’s Colorado River coverage is supported through a Walton Family Foundation grant. KUNC is solely responsible for its editorial content.

As Supreme Court nears decision, thousands of DACA recipients are on the COVID-19 front lines Redistricting fraught with legal pitfalls Defense Department cuts funding for border wall section in Yuma
By posting comments, you agree to our
AZPM encourages comments, but comments that contain profanity, unrelated information, threats, libel, defamatory statements, obscenities, pornography or that violate the law are not allowed. Comments that promote commercial products or services are not allowed. Comments in violation of this policy will be removed. Continued posting of comments that violate this policy will result in the commenter being banned from the site.