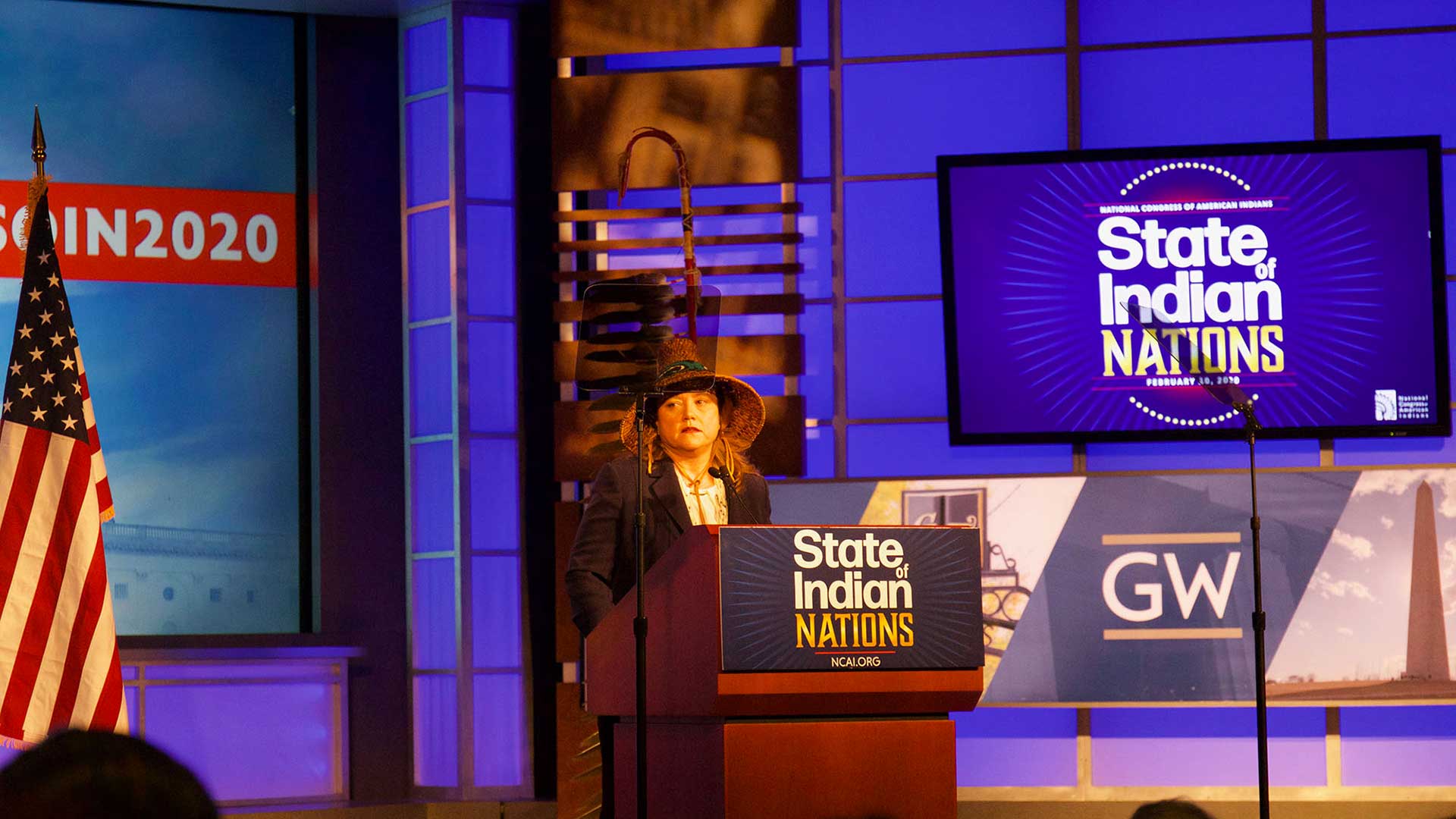 The National Congress of American Indians President said in the 18th annual State of Indian Nations address that Indian Country is strong, but still faces many challenges from the government.
McKenzie Sadeghi/Cronkite News

WASHINGTON – Despite some “encouraging developments,” threats to tribal sovereignty still come “from every branch and every corner of federal and state governments,” the president of the National Congress of American Indians said Monday.

NCAI President Fawn Sharp said in a wide-ranging State of Indian Nations address that the state of the nations is strong, with “remarkable stories of cultural, social, political and economic renewal” made possible by “the greatest Indigenous core value of all — self-governance.”

But that self-governance continues to be threatened by many Americans, including policymakers, who don’t understand tribal sovereignty, she said.

“They don’t recognize the indisputable fact that we are genuine governments with the right, and more importantly, the ability, to govern our own lands and communities,” Sharp said.

The annual address touched on everything from a lack of federal funding for tribal programs to concerns about voter suppression and climate change. But through it all, Sharp stressed the need to renew the “enduring government-to-government relationship between tribal nations and the U.S. government.”

There have been successes in the past year – like the reauthorization of a grant program for the study of Native American Languages and the passage of a bill to fund tribal colleges – but Sharp said those “are the exceptions to an increasingly alarming rule.”

She pointed to Congress’ refusal to pass a reauthorization of the Violence Against Women Act, that has given tribes greater authority to prosecute domestic violence cases, and legal attacks on the Indian Child Welfare Act, which gives priority to tribal members in adoption cases.

VAWA, she said, provided justice for Native victims of violence “where none existed before,” but that Congress is “refusing to expand tribal authority to administer justice for sexual violence, child abuse, stalking, and human trafficking.”

Among the greatest threats to Indian Country are the ongoing problems “caused by federal inaction and indifference,” Sharp said. That neglect was “powerfully illustrated” in the U.S. Commission on Civil Rights’ 2018 report, "Broken Promises," which said the “federal government continues to fail to support adequately the social and economic wellbeing of Native Americans.”

“This report is a troubling glimpse into the pervasive impacts that federal budget shortfalls have on the health and vibrancy of tribal communities,” said Sharp, noting that the 2018 report mirrored findings of a report 15 years earlier.

Sharp laid at least some of the problems at the feet of the Trump administration – a claim echoed in the congressional response by Rep. Deb Haaland, D-N.M.

“I have witnessed actions that I never thought possible by a president of the United States,” Haaland said during her speech. 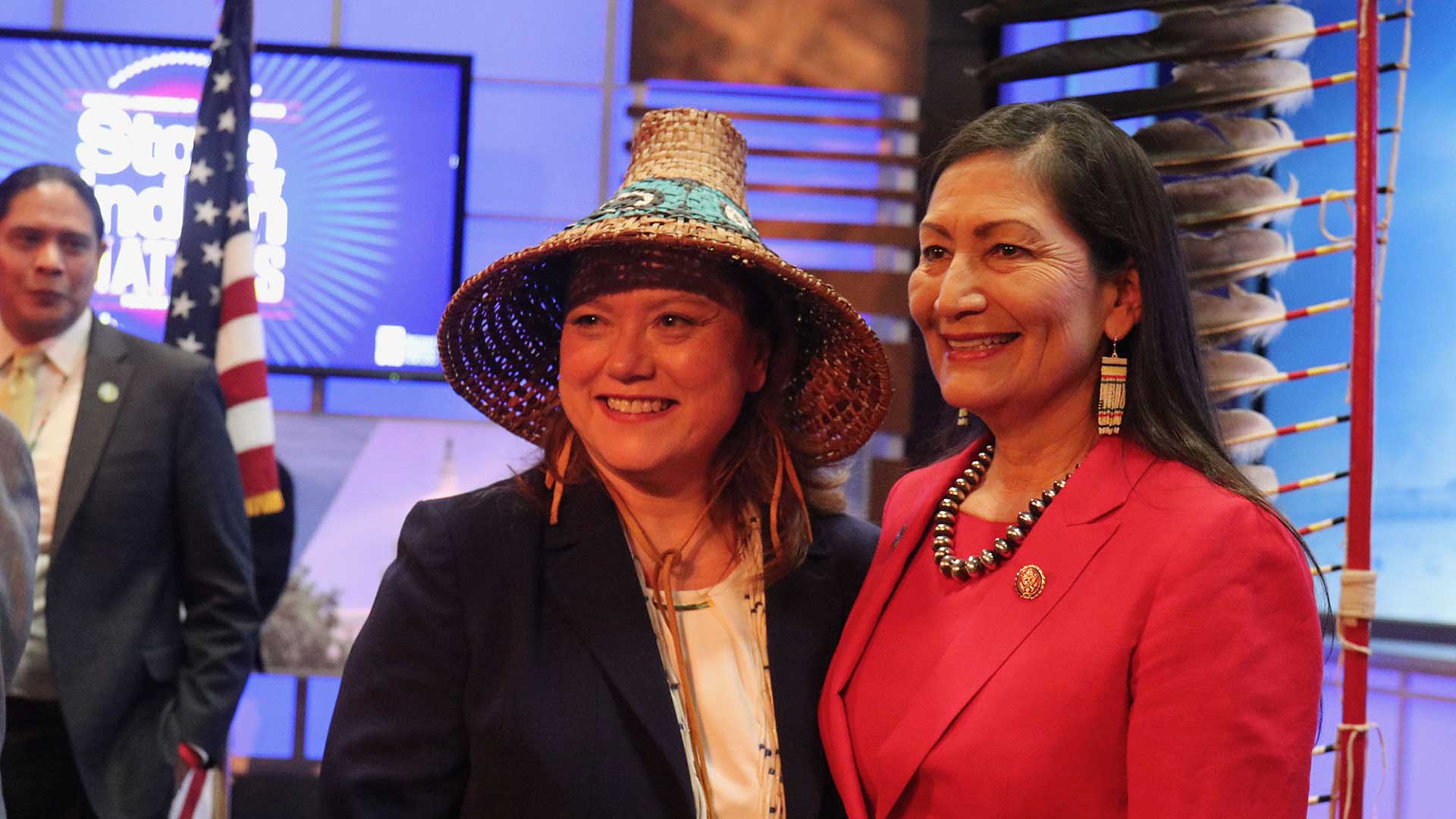 Haaland said the most important legislation right now is the VAWA reauthorization, because “women have the right to be safe.”

President Donald Trump did sign an executive order in November creating “Operation Lady Justice,” a task force aimed at combating the problem of missing and murdered indigenous women. But Haaland said she is concerned that the task force does not include the voices of any survivors or tribal leaders.

She said the order “lacks concrete transparency and consultation requirements.” Haaland said the administration needs “to recognize the centuries of violence that Native people endured, which won’t be solved without concrete procedures and with only $1.5 million.”

She and Sharp both blamed the administration for inaction on climate change, an issue Sharp faced firsthand when rising sea levels forced her Quinault nation to move its main village to higher ground.

“Federal inaction and indifference is perhaps no more destructive than with the current failure of the administration and some in Congress to address the rapidly accelerating impacts of climate change, or even knowledge that it exists,” Sharp said.

Sharp called on the government to fully count Native Americans in the 2020 Census, and to protect them against attempts at voter suppression.

“We will settle for nothing less, and we will exercise our rapidly growing political power and voice in Washington and at the ballot box against any and all who fail to meet this standard,” she said. 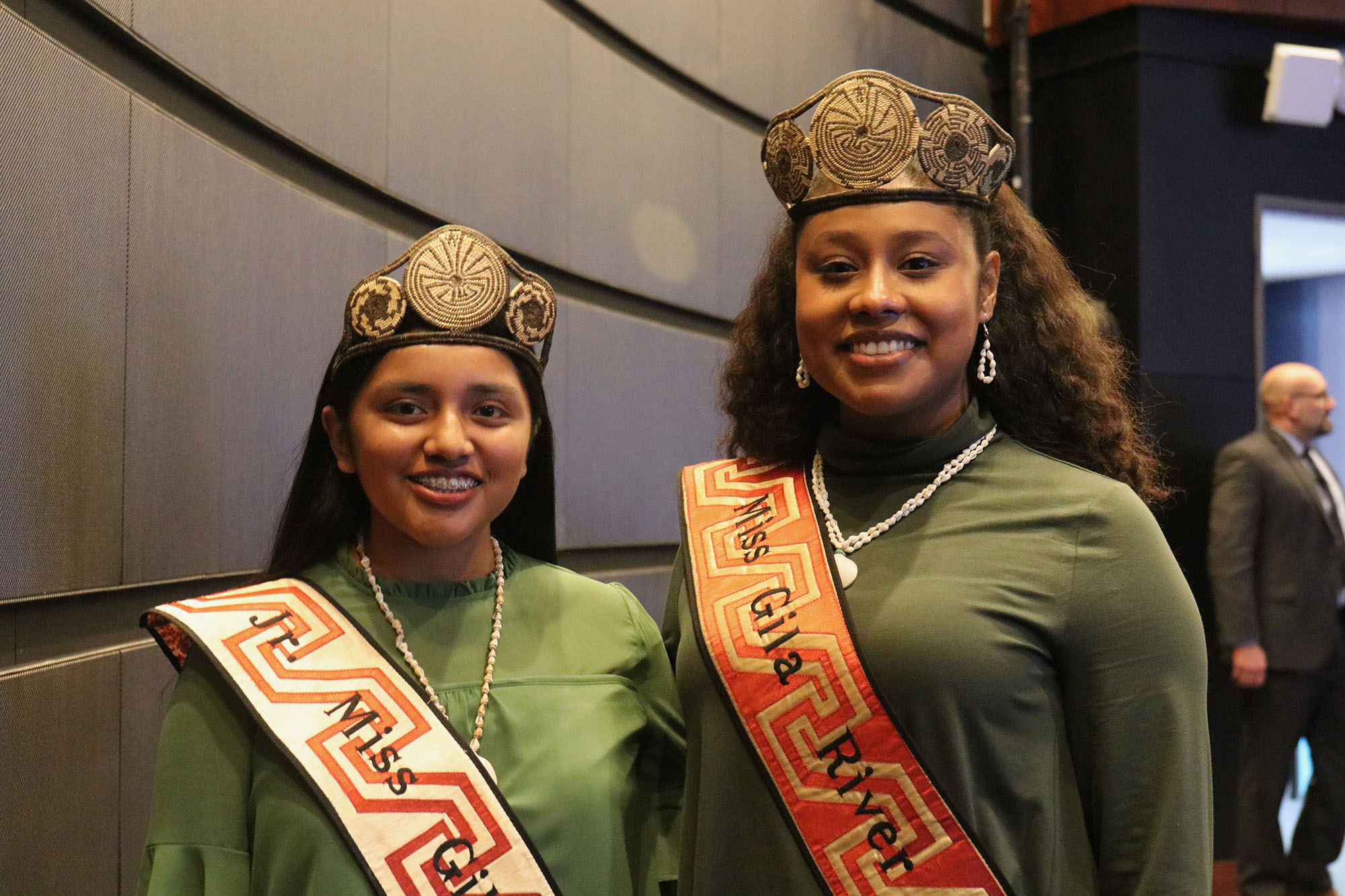 The two said that ensuring that Native Americans have a voice is important, as they have seen “time and time again,” in their community and across Indian Country, that things that tribal communities hold important are being ignored.

Tribal officials press for more, and more predictable, federal funding Immovable objects: Asarco, striking workers at odds after four months Window opens for tribes to seek licenses for internet access
By posting comments, you agree to our
AZPM encourages comments, but comments that contain profanity, unrelated information, threats, libel, defamatory statements, obscenities, pornography or that violate the law are not allowed. Comments that promote commercial products or services are not allowed. Comments in violation of this policy will be removed. Continued posting of comments that violate this policy will result in the commenter being banned from the site.