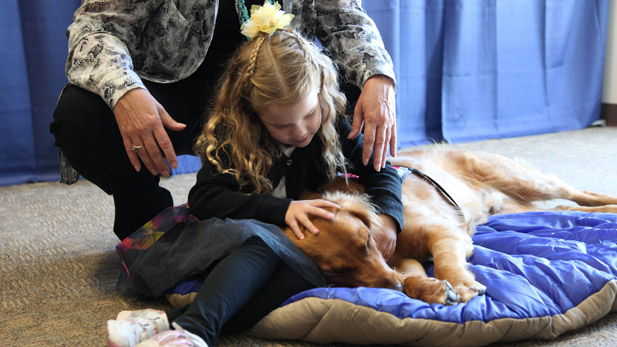 The Pima County Attorney's Office has added a new tool to help abused children get through interviews and visits at the Southern Arizona Children's Advocacy Center. This tool has four legs and a friendly disposition.

Russell, a 2-year-old golden retriever, is the new addition.

Russell has been trained to help abused children feel comfortable enough to talk to adults about what’s happened to them.

The service dog will be working at the Southern Arizona Children’s Advocacy Center as part of the county’s new Courthouse Dog program. Kathy Rau, the children’s center director, said Russell hasn’t officially started working but during training, he was able to help a little girl feel comfortable and relaxed in the interview room. 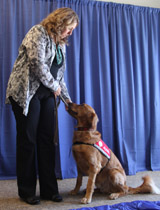 "We were just sitting there chit-chatting and she just laid on top of Russell and was playing with his fur," Rau said. "We just started talking, and things started coming out naturally."

The children's advocacy center will be in constant communication with Pima County Attorney Barbara LaWall and her office so Russell can meet with victims preparing for court, and if necessary the dog will be taken into the courtroom to help young victims, Rau said.

Russell will also help children in middle school and high school, Rau said, something that will likely be more appealing to teens who up until now sat in a waiting room with color books and puzzles, she said.

Since 2003 courthouse dogs have participated in court proceedings in other states, by either lying quietly on the floor beside a child in the courtroom or in some cases sitting next to the child in the witness box.

Russell has trained since birth to become a facility dog and help young victims of sexual abuse, said Ellen O’Neil-Stephens from Courthouse Dogs.

"Dogs like Russell, courthouse dogs, are especially selected to work during the investigation and prosecution of a crime because of their very very quiet demeanor," she said. "They are for everyone in the criminal justice system because it's an incredibly stressful environment for everyone." 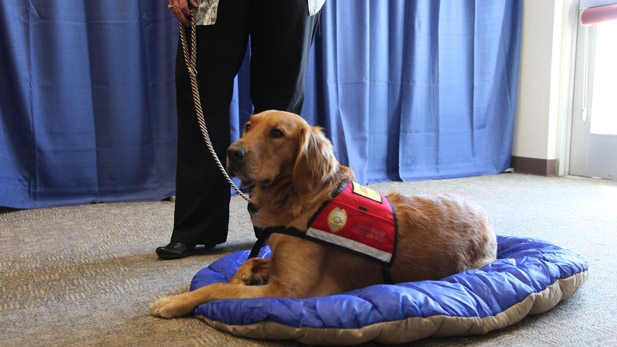 Rau took Russell in as the new member of her family, which already included two dogs and two cats, she said. He will be working at the center most of the time but when he goes home and his working vest comes off, Rau said it's like a switch is turned on and Russell behaves like a regular dog, curious and playful.

Russell is the first and only courthouse dog in the county, although there are other courts in the state that have a dog available. Currently these dogs are in 17 states and 35 jurisdictions, O'Neil-Stephens said.

New Courthouse Opens in Tucson Monday Tucson Establishes Domestic Violence Court Detained Youth Hear From 'Raw' Author
By posting comments, you agree to our
AZPM encourages comments, but comments that contain profanity, unrelated information, threats, libel, defamatory statements, obscenities, pornography or that violate the law are not allowed. Comments that promote commercial products or services are not allowed. Comments in violation of this policy will be removed. Continued posting of comments that violate this policy will result in the commenter being banned from the site.