BOO!! Are you ready for a new trick-or-treat bag of seasonal goodies designed to frighten and delight? Then click bravely and prepare yourself for the chills! by Mark McLemore Tweet

"My heroes have always been monsters..."

A life-long fan of horror and science fiction books, music, and movies, Mark McLemore jumps at the chance to take Arizona Spotlight in that direction every Halloween.

So, we invite you to darken the lights and turn up your computer speakers to share in the ghoulish fun of the 2012 Haunted Halloween Arizona Spotlight !!

Listen to the complete edition of the 2012 Haunted Halloween Arizona Spotlight:

For those who'd rather skip to an individual segment, here is the complete list of this year's stories:

Do you know what sorts of terrors keep some of the students at the University of Arizona awake at night? How do their existential fears manifest themselves on the material plane? Mark McLemore and Amer Taleb walked among the student body to take the annual Arizona Spotlight survey of what they think is REALLY scary...

THE PHANTOM OF THE OPERA ORGANIST

The American Guild of Organists Southern Arizona Chapter and the Tucson Girls Chorus present a special screening of the Lon Chaney silent film masterpiece The Phantom of the Opera, with music improvised live by Dorothy Papadakos on pipe organ. It happens at the Catalina United Methodist Church on Saturday, October 27, 2012, The event including dinner starts at 5 pm, the movie starts at 7 pm.

The University of Arizona Poetry Center features programs for children like Poetry Joeys, designed to help them understand and even write their own poetry at a very young age. For this year's Halloween show, 10-year old Danielle Wing, a member of the Poetry Center's Book Club, reads two poems written by younger kids.

Five Headed Cutie Pie, a collaborative work from Poetry Joeys ages 4 - 6, reveals the terrifying and somewhat surreal secrets of a creature that definitely rates as one of this region's most obscure inhabitants...

While the short poem My Mask of Vampires by 6-year old Seamus accomplishes in three lines what some writers might fail to do in three volumes...

When things start going going bump in the night, is there anyone you can count on to bump back? Gisela Telis hunted some ghosts with the Southern Arizona Ghost and Paranormal Society, a local organization dedicated to seeking out the bitter truth... 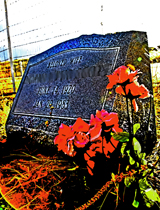 Phoenix-based photographer Mark Lipczynski was recently given a ghoulish assignment by Arizona Highways magazine. He was asked to visit some of the state’s oldest cemeteries - stay awhile - and then take some pictures. Mark Duggan talks with Mark Lipczynski about his adventures visiting these final resting places...

To a few people, horror films are the only movies that really matter, on the grounds that making somebody laugh or cry is not as hard to accomplish as scaring them. That they will remember.

Chris Dashiell offers up his own very different take on the horror genre in this commentary, which uses films like Don't Look Now, Videodrome, and even No Country for Old Men as examples of different ways that fear and anxiety can be created in an audience...

THEY LIVE IN THE DESERT by WESTON OCHSE 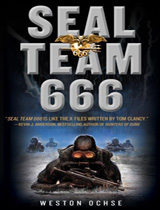 Weston's next book is "Seal Team 666", to be published in November, 2012 by Thomas Dunne Books

The Sonoran Desert landscape can provide inspiration for many things, including some questions...like how did it become a desert in the first place? Dark fantasy and horror author Weston Ochse is sure he doesn't know, any more than he can explain what happened to him one fateful night, when the desert's tranquility inspired him to go a little too far from home...

About the author: Weston Ochse’s last name is pronounced “oaks.” Together with his first name, it sounds like a stately trailer park. He is the author of nine novels, including SEAL Team 666, which comes out in November 2012. He’s won the Bram Stoker Award and has also been nominated for a Pushcart Prize. He lives in the Arizona desert within rock throwing distance of Mexico. For fun he races tarantula wasps and watches the black helicopters dance along the horizon. 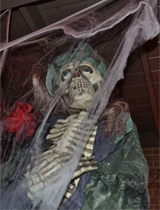 Thank you for listening to the 2012 Haunted Halloween Arizona Spotlight.

On behalf of this show's producers, Mark McLemore and Jim Blackwood, as well as the staff and crew at Arizona Public Media, we wish everyone a very safe - and extremely SCARY - Halloween season.

Now go get that candy!

The 8th Annual Haunted Halloween Arizona Spotlight THE HAUNTED HALLOWEEN SHOW 2014 Arizona Spotlight Special: Haunted Halloween
By posting comments, you agree to our
AZPM encourages comments, but comments that contain profanity, unrelated information, threats, libel, defamatory statements, obscenities, pornography or that violate the law are not allowed. Comments that promote commercial products or services are not allowed. Comments in violation of this policy will be removed. Continued posting of comments that violate this policy will result in the commenter being banned from the site.