Outbursts Mark Board of Regents' Meeting 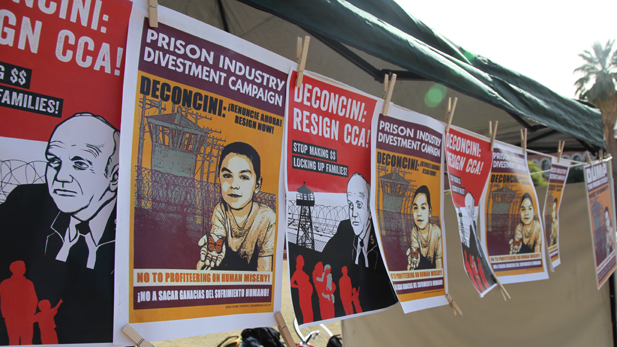 Posters calling for Dennis DeConcini to resign from the Corrections Corporation of America board hang near a protest during the Arizona Board of Regents Meeting Dec. 6, 2012. DeConcini is also a member of the Board of Regents.
Andrea Kelly

About a dozen protesters continuously interrupted Thursday’s meeting of the Arizona Board of Regents with outbursts criticizing regents Dennis DeConcini and Anne Mariucci for their ties to a private prison company.

Both regents sit on the board of directors for the Corrections Corporation of America.

This was not the first time members of the audience asked for DeConcini and Mariucci to leave CCA.

In the past, protesters have stated their case one by one during the call to the audience portion of Arizona Board of Regents meetings. This time, however, University of Arizona students and community members stood up on chairs and yelled out in the middle of a presentation. Others chanted “CCA Go Away” and were escorted out.

“We weren’t given much of a choice,” said Caroline Isaacs with American Friends Service Committee. “We were ordered to choose one spokesperson and that we would be forbidden for giving any more testimony than having one person speak." 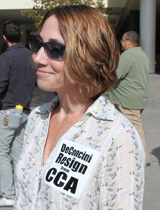 Caroline Isaacs is calling for Dennis DeConcini to resign from the Corrections Corporation of America board. (PHOTO: Andrea Kelly)

The board secretary advised opponents of CCA to have one representative from the group speak during the call to the audience portion of the meeting because the matter was not directly related to the board and policy allows this request, said Katie Paquet, an ABOR spokeswoman.

Dozens of protesters gathered at the UA mall to continue the protest throughout the afternoon. Many, like Isaacs, say the regents’ connection with CCA is a conflict of interest, because higher education receives funding from the state and CCA receives payments from the state.

John Huppenthal, the state’s school superintendent, asked the regents to have a stricter policy on how to prevent and handle such protests in the meeting room.

“These interruptions are a bullying tactic,” he said.

"These two regents have served the state very well, and they work very hard on behalf of the students," Killian said.

Mariucci did not address the interruptions and DeConcini was absent from the meeting.

Senate candidates face off in debate First weekend of taking tests to students gets results State unemployment fund in danger of running out
By posting comments, you agree to our
AZPM encourages comments, but comments that contain profanity, unrelated information, threats, libel, defamatory statements, obscenities, pornography or that violate the law are not allowed. Comments that promote commercial products or services are not allowed. Comments in violation of this policy will be removed. Continued posting of comments that violate this policy will result in the commenter being banned from the site.