Kate Breakey says the photographs in her recent series titled Creatures of Light and Darkness are inspired by the sounds she hears in the desert.

“The Desert is so much about listening to it,” says Breakey. 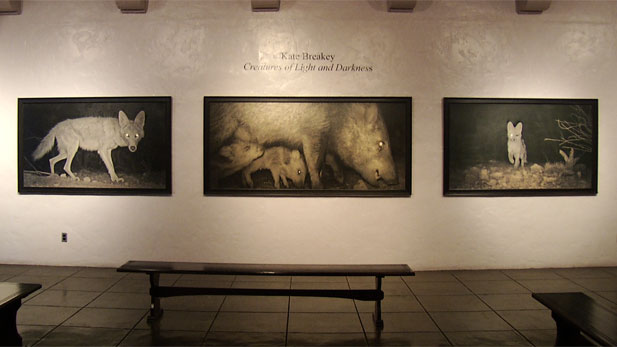 "Creatures of Light and Darkness," painted photographs by Kate Breakey

Breakey’s photos feature dream-like images of the secluded lives of coyotes, javelinas and other desert creatures. The up-close photos are taken with a motion-sensing infrared camera typically used by wildlife researchers and hunters.

“I call it the ‘spy camera,' because basically we are spying on the creatures that we live with but don’t ever actually get to see this close up,” she says.

“Creatures of Light and Darkness” is on display at the Temple Gallery downtown through Tuesday.

Photographer Strives to Capture Vanishing Culture Frida Kahlo Photo Exhibit at Tucson Museum of Art Lauren Redniss on "Oak Flat: A Fight for Sacred Land in the American West".
By posting comments, you agree to our
AZPM encourages comments, but comments that contain profanity, unrelated information, threats, libel, defamatory statements, obscenities, pornography or that violate the law are not allowed. Comments that promote commercial products or services are not allowed. Comments in violation of this policy will be removed. Continued posting of comments that violate this policy will result in the commenter being banned from the site.