Three team members have committed to travel to Rio de Janeiro for the games "Gold medal...that's what we want." by Laura Palmisano TWEET SHARE
(VIDEO: AZPM ) 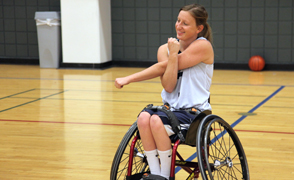 The UA team is currently training for the 2013-14 season.

"Honestly, my life is just basketball and school, as of right now," said Courtney Ryan, who's a member of the basketball team.

For the past five seasons, Pete Hughes has coached the team. But he has brought more than coaching knowledge to the sidelines.

“It’s fun to watch the way they play," Hughes said. "I no longer play. I just retired, and I’m glad that I don’t have to play against them because they are pretty vicious on the court.”

Four of the eight players have been selected for the USA Women's Wheelchair Basketball Team, though only three have committed. Ryan is one of those selected to play at the 2016 Paralympic Games in Brazil. She was selected this past summer.

Ryan has been playing wheelchair basketball for more than a year.

“Before this I was playing collegiate soccer on a division two team in Colorado at Metro State," she explained. "There I played for three years before my injury, and in my third year during a soccer game I had a blood vessel leak in my spinal cord which caused me to become an incomplete paraplegic, so I am paralyzed from the waist down.” 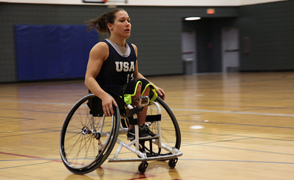 After she finished rehabilitation, Ryan started playing wheelchair basketball on a men’s team. She was recruited to the UA by Hughes.

“The hardest transition was when I got out of the rehab hospital and into the real world," Ryan said. "It’s just really difficult traveling in a wheelchair when your first newly-disabled, and honestly I didn’t really start feeling comfortable until I came to the UA, until I met all of these girls who have been in chairs for years now, some even since they have been born. And so they’ve taught me a lot. They’ve taught me about transfers. They’ve taught me about getting around and chair skills and maintenance.”

Their team captain Jenn Poist is making a return trip to the Paralympics. She competed in the 2012 London games.

“We finished fourth at the Paralymics, which was kind of disappointing," Poist said. "We were hoping to bring home a medal. Germany won Gold in London so they’re number one. Australia and the Netherlands also have really good programs, and will probably be our biggest competition in Rio.”

Hughes said wheelchair basketball is different from the basketball most people are familiar with.

“Obviously there is no jumping or lateral movements, so I think when you talk about it from a strategic point of view there’s more picking and rolling, because you can’t pick through a chair once you get right chair position, so it a little more like a combination of offensive line blocking schemes for football," Hughes explained.

Ryan said she’s looking forward to her second season with the UA team.

“It’s proven to me with this sport that once an athlete always an athlete," she said. "And I just love the camaraderie between the team, and how everybody brings something different and brings it into a unit.”

The team kicks off its season later this month with their first tournament in Los Angeles, Calif.

Tucsonan Aims for 2016 Olympics Tucson Students Traveling to China for Competition Young Tucson poets share their feelings with the world.
By posting comments, you agree to our
AZPM encourages comments, but comments that contain profanity, unrelated information, threats, libel, defamatory statements, obscenities, pornography or that violate the law are not allowed. Comments that promote commercial products or services are not allowed. Comments in violation of this policy will be removed. Continued posting of comments that violate this policy will result in the commenter being banned from the site.