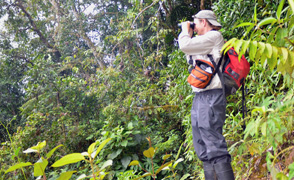 Scientists from the University of Arizona are part of an international research team looking at how climate change is affecting trees in the Amazon.

It's estimated that 20 percent of the world’s oxygen is produced by the Amazon rainforest, which is why it’s described as “the lungs of the earth.”

Brian Enquist, a UA plant ecologist and professor, is a principal investigator on the research project, funded in part by the National Science Foundation.

Over summer, he was in Peru collecting samples.

“This project is focused on an elevation gradient that ranges from all the way down from the Amazon basin, so the lowlands of tropical forest, all the way up to (the) tree line in the Andes," Enquist said.

His research is focused on studying the branching architecture of trees.

Enquist said that following a tree's branching pattern, going from one branch to another, can provide information to researchers, such as the flow of water within the plant or how much carbon dioxide it’s absorbing.

He said as an ecologist, what he is trying to do is link the measurements taken from a branch of a tree and use it to try and understand how a tree operates as a whole.

"...and then be able to say something about how changes in climate will then influence the functioning of that tree but then also how various ecosystems then function," Enquist said.

Lisa Patrick Bentley, a post-doctorate researcher with Oxford University and a former UA researcher, has been in and out of the Amazon since April. 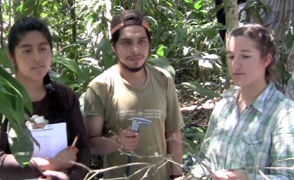 “What we are actually doing is we are cutting branches down from trees using a tree climber," Patrick Bentley said.

Once the branch hits the ground, researchers measure the length and width of each part of the branch.

"Using that information, we can predict how much carbon we expect the entire tree to be storing or releasing into the atmosphere," Patrick Bentley said.

Patrick Bentley said she and her fellow researchers are measuring other aspects of trees in addition to their branching architecture.

“We measure specific leaf area of the leaves, so that’s basically the relationship between the leaf fresh weight and the leaf dry weight and leaf mass," she explained.

The researchers also are measuring the pigment and chemical composition of leaves and the photosynthesis rate of the leaves.

"We also look at the whole entire canopy environment of a tree so we measure the light levels at different heights throughout the canopy,” she said.

The list of measurements the researchers take goes on. 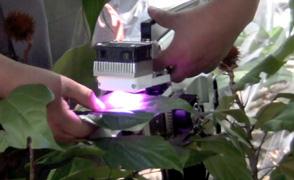 He said global climate change models predict the Amazon will experience changes in temperature and precipitation.

The team wrapped-up the field portion of it’s research this week and will now process samples and compile data, Patrick Bentley said.

UA Researchers Discover How Nerve Cells Make Connections Measuring Loneliness UA names Jedd Fisch new football head coach
By posting comments, you agree to our
AZPM encourages comments, but comments that contain profanity, unrelated information, threats, libel, defamatory statements, obscenities, pornography or that violate the law are not allowed. Comments that promote commercial products or services are not allowed. Comments in violation of this policy will be removed. Continued posting of comments that violate this policy will result in the commenter being banned from the site.