With low-test scores and enrollment down, Manzo Elementary School was one of three west side neighborhood schools scheduled for closure in 2012 by Tucson Unified School District.

But the school still stands in Barrio Hollywood, and some have linked its survival and test-score turnaround to its nationally recognized ecology program. 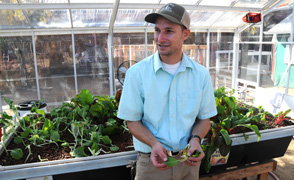 “We now see the ecology program as a way to close the achievement gap with our students," said Moses Thompson, a school counselor and founder of the ecology program at Manzo. "Manzo has historically been an underperforming school and so the...program is one way we get kids excited to come to school. We can get students to see themselves as learners, to see themselves as scientists", Thompson said.

In 2012, the U.S. Green Building Council named Manzo one of the best green schools in the K-12 category. It was the only K-5 public school in the nation to receive the honor.

Since its inception more than seven years ago, the program has received numerous accolades from local, regional and national organizations for its sustainable efforts.

"To see a batch of kids go from preschool through fifth grade, and to become knowledgeable and passionate about some of the big issues of our time...ecological issues, climate (change) issues...that's pretty cool," Thompson said. 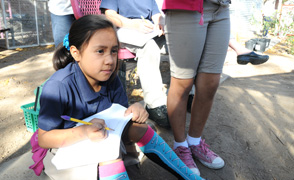 However, it’s also the program’s impact on academic results that has teachers excited.

“It’s effective because the kids see real life applications of what they’re learning in class, that math exists outside of the classroom, outside of text books, that it’s a real life skill,” said Wes Oswald, a third grade teacher at Manzo and an active leader in the ecology program.

Thompson referred to the math his kids are learning as 'hands-on functional math;' the kind that can be applied in tangible and pragmatic ways.

"When they come out for a shift, they log in their start time, when they're done they log in their finish time and then they calculate elapsed time," he said. "Calculating elapsed time is a tested standard. When we're selling produce, all of the metrics involved there, we need to teach our kids how to weigh and count accurately..." 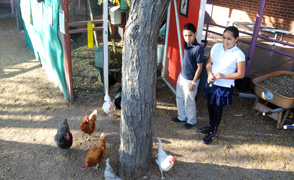 Manzo students, Roman Talavera and Araceli Fuentes provide a tour of the chicken coop. Eggs are gathered and counted each day.
Mitchell Riley

The aquaponics greenhouse is the cornerstone of this green project, Thompson explained. Such was paid for by Catalina North Church of Tucson, whose representatives were looking to improve attendance and literacy rates at several Tucson neighborhood schools.

The main footprint of the greenhouse is an intensive aquaponics food production system in which the students are simultaneously farming vegetable produce and the popular freshwater fish, tilapia. The tilapia provide nutrients for the plants and the plants provide filtration for the tilapia. It pretty much functions like an ecosystem. 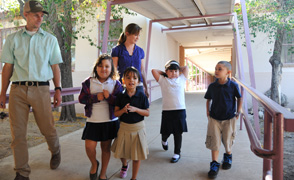 The sustainability efforts at Manzo are not limited to one area of the school. There are water harvesting cisterns, micro-gardens, as well as a desert tortoise habitat and a bird sanctuary throughout campus.

"Everything you see...part of the ecology program is not district (TUSD) funded," Thompson explained. "We have to grant write and look to community support to maintain this infrastructure that we have."

The sustainable infrastructure at Manzo has created more opportunity to teach math and science.

University of Arizona students are now frequent visitors, volunteers and guest teachers at the elementary school.

Michelle Coe is a graduate student at UA's School of Geography and Development. Through a NASA Graduate Fellowship, Coe has incorporated a miniature version of a Biosphere 2 experiment known as the LEO Project into Manzo’s greenhouse. The LEO Project, also known as the Landscape Evolution Observatory, studies the hydrology, geochemistry and ecology of three identical hill slopes. 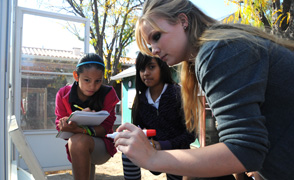 “We’re allowing the children to collect data and be part of the overall experiment by seeing what kind of seedlings can germinate in the volcanic soil, looking at climate change impacts and how the aspect and slope can effect the seeds … so, they’re collecting a bunch of stuff,” Coe said.

The work that Michelle Coe and her students are doing and the data that they are collecting will be used in LEO studies by Biosphere 2 scientists.

"Because of the greenhouse, we have fourth graders who are going to help drive decision making in a $7 million-project that sits inside Biosphere 2," Thompson said.

With test scores and enrollment trending upward, Thompson continues to seek opportunity and open doors for his students.

Manzo Elementary Teacher Collaborates with UA, Expands Agriculture Ed in TUSD Bike Fest Celebrates All Things Bicycle in S. AZ Program Provides Juvenile Offenders With Second Chance
By posting comments, you agree to our
AZPM encourages comments, but comments that contain profanity, unrelated information, threats, libel, defamatory statements, obscenities, pornography or that violate the law are not allowed. Comments that promote commercial products or services are not allowed. Comments in violation of this policy will be removed. Continued posting of comments that violate this policy will result in the commenter being banned from the site.