Institute for Mexicans Abroad says Rothschild has contributed to the Mexican community in the city, strengthened relationships between the two countries. by Fernanda Echavarri TWEET SHARE 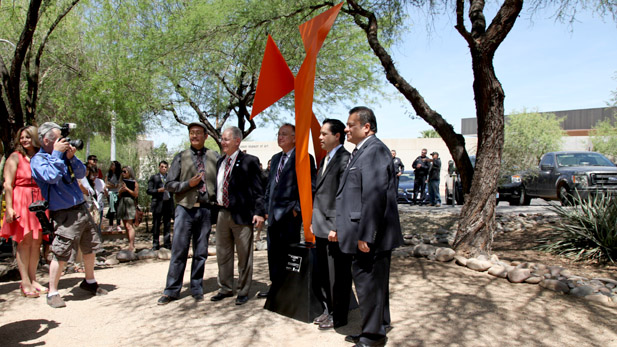 Tucson Mayor Jonathan Rothschild received a prestigious award from the Mexican government Thursday for his work to strengthen relationships between the two countries. 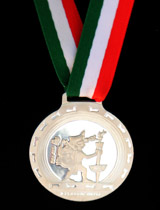 The medal given to Rothschild (PHOTO: Fernanda Echavarri, AZPM)

The Ohtli Award is the highest recognition the Mexican government can give to members of the community in the United States, who have contributed in “an exceptional manner to the development of the Mexican community living abroad,” according to officials with the Mexican consulate in Tucson.

Ohtli is a Nahuatl expression for "he/she who opens pathways."

“Mayor Rothschild and the city of Tucson have been great allies of the consulate in working together to strengthen the relationship with Mexico and fostering stronger ties between our communities,” said Ricardo Pineda, consul of Mexico in Tucson.

About 50 people gathered outside City Hall at Sunset Park Thursday morning, where Mexican artist Ariel Diaz also unveiled his sculpture, “Bird of Paradise,” to the city.

Rothschild thanked his staff, particularly Juan Padres, the city’s economic development specialist for international trade, for his work with the Mexican government.

Mexico Recognizes UA Professor for Research on Culture and History Voters May Decide If Mayor, Council Members Should Get a Pay Raise AZ Illustrated Politics: Friday, May 9, 2014
By posting comments, you agree to our
AZPM encourages comments, but comments that contain profanity, unrelated information, threats, libel, defamatory statements, obscenities, pornography or that violate the law are not allowed. Comments that promote commercial products or services are not allowed. Comments in violation of this policy will be removed. Continued posting of comments that violate this policy will result in the commenter being banned from the site.