The Tucson Modern Streetcar, aka SunLink, began service Friday, and city officials and transit supporters say it already is successful because it spurred economic development along North Fourth Avenue and downtown Tucson. 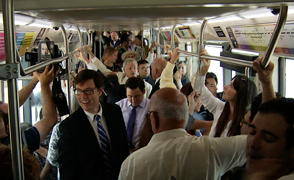 Tucson's streetcar is jammed during a trip for VIPs and media on 7-21-14.
Bob Lindberg, AZPM

"We have over $800 million of public and private investment already along the line that’s occurred basically since we received our federal funding in 2010," said Shellie Ginn, the city's streetcar project manager.

"I know that there’s multiple hundreds of millions of dollars of projects that are now going to be coming up soon, so that’s going to be increasing over the $1 billion mark. That’s one of the markers we have for how successful this project is going to be," Ginn said.

In the last year, student housing complexes have opened on the east end of downtown, and new and existing restaurants are harder to get into on weekend evenings without a wait.

The route includes 23 stops, and runs from University of Arizona Medical Center near Speedway Boulevard and Campbell Avenue, through the UA campus, North Fourth Avenue and downtown, with its western end near the foot of Sentinel Peak in the Mercado District west of downtown. 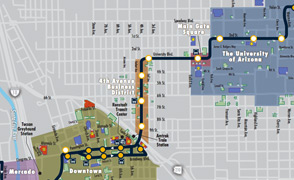 That's evidence the streetcar line was a good idea, said Steve Farley, a Tucson streetcar advocate. Farley, also a state senator, began publicly campaigning for a streetcar in the early 2000s as a member of Tucsonans for Sensible Transportation.

After several failed attempts at getting new transit approved at the ballot box, he worked to have the streetcar included in the Regional Transportation Plan, a 20-year, $2 billion project to improve transportation in the Tucson Metro area.

The project was approved as part of the RTA because it was designed as a regional system with the possibility of extensions to other parts of town, said former Tucson Mayor Bob Walkup, as he rode the streetcar for the first time this week.

"You and I lost two very important initiatives back to back," Walkup told Farley as they rode the streetcar.

“And we learned our lessons," Farley responded.

That's about the same price as the Arizona Department of Transportation's most expensive project as of a few years ago: widening four miles of Interstate 10 in Tucson from Prince Road to 29th Street.

The price tag is high because the project was complicated, Ginn said. Underground utilities had to be moved from under the path of the tracks, overhead electrical connections were installed and repaving was needed on much of the four-mile route. 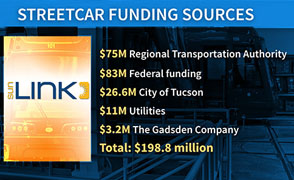 The city also built a maintenance facility, which looks like an auto-mechanic's bay, with the ability to work above and below the cars to fix wheel, mechanical and electrical issues.

"On top of that we had to hire a lot of our experts because we just didn’t have that expertise here in the city of Tucson," Ginn said.

The streetcar will cost about $4 million a year to operate, Ginn said. The money will come from fares riders pay, the RTA and city coffers.

Opening delay As he was completing his final term as mayor of Tucson, Walkup spoke often about riding the streetcar out of office. The original opening date was set for Nov. 11, 2011. The election of a new mayor would have been complete, and Walkup would have less than a month left in office at that time.

Instead, due to a series of delays, the opening came more than two and a half years later.

Partly, that date was pushed back because funding sources were not confirmed. Federal funding had many stipulations, including that the materials needed to be made in the United States. That was because some of the money was part of the nation's economic stimulus package, meant to create or retain jobs in this country.

The city refined the start date to October 2013, Ginn said.

Then, there were more delays, this time with the streetcars themselves. The city found the Portland company building them was not going to meet its deadlines.

"The streetcar manufacturing took a little bit longer than originally estimated due to the fact that they’re just a new manufacturer and their timing estimates were a little bit off on the procedures that they have to go through to manufacture the vehicles," she said.

Once the streetcars were in Tucson, each of the eight cars had to be tested before it could be declared ready for the public to ride.

Business buy-in Some businesses along the streetcar route were worried about the impact of construction. In some places, such as along Fourth Avenue, streets were closed for complete reconstruction that took months.

To prepare businesses, Ginn said the city started working with them a couple of years before construction began.

"So a lot of them had a chance to weigh in on what they needed and what they’d like to see as part of the design on the system. They’ve been a partner with us through pretty much the entire project," Ginn said.

How to ride One way trips cost $1.50, round trip tickets are $3 and an unlimited day pass is $4. Unlike SunTran buses, tickets must be purchased before boarding, and are available online, at transit centers, or at electronic vending machines at each streetcar stop.

A SunLink pass, for rail, and a SunTran pass, for buses, are interchangeable. Transfers work on both systems, and monthly or annual passes work on either system.

At the streetcar stops, the ticket machines vend a $4 day pass, good for unlimited rides on the transit system - buses and streetcars - for 24 hours.

"That’s the only thing that’s available at the ticket vending machine. We just kept it very simple," Ginn said.

Those machines take exact cash or Visa or MasterCards. When the streetcar arrives at the stop, riders hold their passes up to electronic readers near the doors, which validate the tickets.

Starting Monday, when ticket agents in the vehicles ask to check a ticket, they will be looking to make sure every ticket was validated at the electronic readers near the doors.

"If they haven’t, right now we’re going to focus on education, because this is so new to everybody, but eventually we will be citing people if they do evade paying their fare," Ginn said.

Hours: The streetcar hours vary by day, and the frequency of service is designed around expected peak times of use. The City Council asked the streetcar managers to extend service later on busy bar and restaurant nights, Thursdays through Saturdays.

"We evaluated the schedule and shifted our start times to 7a.m. and were able to stay open until 2 a.m. with 30 minute service on Thursdays, Fridays and Saturdays without impacting the budget," Ginn said.

60,000 Try Tucson Streetcar on Weekend Inaugural Runs
By posting comments, you agree to our
AZPM encourages comments, but comments that contain profanity, unrelated information, threats, libel, defamatory statements, obscenities, pornography or that violate the law are not allowed. Comments that promote commercial products or services are not allowed. Comments in violation of this policy will be removed. Continued posting of comments that violate this policy will result in the commenter being banned from the site.