Voices for the Cure with Sherrie Dobson

The story of a woman who listened to her body - and her mother - and caught her breast cancer early, now looks back at her experience in a way she never thought she would. by Mark McLemore TWEET SHARE 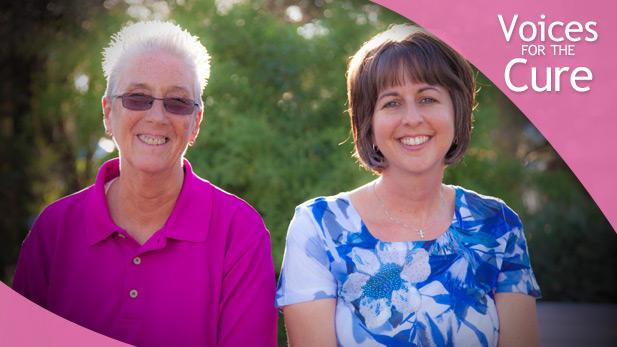 It's a diagnosis that no one wants to receive, but an estimated 1.3 million people must face every year.

Breast cancer is the most prevalent cancer in the world, striking women and men of every age and race. October is Breast Cancer Awareness Month, and Voices for the Cure lets those whose lives have been touched by breast cancer share stories of courage, love and hope.

Sherrie Dobson first met Gina Costello at work, providing health and social services in the Tohono O'odham Nation. Last spring, they became friends when Sherrie sought Gina's help to cope with her breast cancer diagnosis. An active, healthy young woman, Sherrie's first and only indication that something was wrong was a leakage coming from her breast...

Voices for the Cure 2015 with Betty Villegas and Jessica Ray Voices for the Cure 2015 with Jennifer Coughlin and Ruben Palma Voices for the Cure with Carolyn Green and LaTrice Jordan
By posting comments, you agree to our
AZPM encourages comments, but comments that contain profanity, unrelated information, threats, libel, defamatory statements, obscenities, pornography or that violate the law are not allowed. Comments that promote commercial products or services are not allowed. Comments in violation of this policy will be removed. Continued posting of comments that violate this policy will result in the commenter being banned from the site.