Tucson Elections Will Be Vote-By-Mail Again 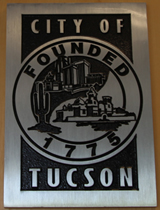 Instead of dozens of polling places, the council will open just six in-person voting sites on Election Day, one in each ward.

This will be the second Tucson election cycle with an emphasis on voting early through the mail.

This year the city council seats in wards 1, 2 and 4 are up for election, along with the mayor.

So far, only one challenger has emerged: Democrat Chuck Williams has filed to run in a primary against Rothschild.

Any candidates who want to run for office have until the end of May to gather sufficient signatures from registered city voters to qualify to get their name on the ballot.

Anti-Climactic Primary Launches Election Season Tucson City Council Discusses Proposal to Develop Empty Schools Tucson City Council Asks Public to Weigh In On City Manager Search
By posting comments, you agree to our
AZPM encourages comments, but comments that contain profanity, unrelated information, threats, libel, defamatory statements, obscenities, pornography or that violate the law are not allowed. Comments that promote commercial products or services are not allowed. Comments in violation of this policy will be removed. Continued posting of comments that violate this policy will result in the commenter being banned from the site.