First in city center for years; boutique operation will have 10 rooms; prices starting at $80. by Vanessa Barchfield TWEET SHARE

This is a corrected version.

The Downtown Clifton Hotel, opening soon in downtown Tucson, is the newest incarnation of a building that started as a motel, was converted to public housing and in recent years has sat vacant. 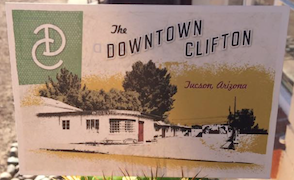 Co-owner Clif Taylor, who lends his name to the hotel, said the Clifton's style is Palm Springs mid-century with a heavy dose of Tucson mixed in: "We had this idea for doing a brutalist dude ranch in the middle of the city."

Taylor said he and his partners wanted to keep everything about the hotel as local as possible – to imbue it with a sense of place. The art hanging on walls is by Tucson artists; Taylor handmade the beds himself; the coffee beans are from local coffee shop Exo; and guests get coupons to eat breakfast at the nearby 5 Points Market.

Phil Lipman, one of Taylor’s business partners, described the community’s response to the new hotel: "It’s just been overwhelming. How many people think it’s a great idea and how many people are going to use it and are excited about using it."

The Downtown Clifton has 10 rooms and is located between Barrio Viejo and Armory Park, at 485 S. Stone Ave. According to the website, rooms will cost about $80 a night.

Two Downtown Tucson Hotel Plans Get Tax Breaks Fence Goes Up Around Pima County's Iconic Courthouse Making Music From the Ground Up at the Saint Cecilia Studios
By posting comments, you agree to our
AZPM encourages comments, but comments that contain profanity, unrelated information, threats, libel, defamatory statements, obscenities, pornography or that violate the law are not allowed. Comments that promote commercial products or services are not allowed. Comments in violation of this policy will be removed. Continued posting of comments that violate this policy will result in the commenter being banned from the site.