Illegal Immigration from Mexico Down in Arizona, Nationally

The number of people from Mexico apprehended crossing the border illegally is dropping nationwide and Arizona mirrors the trend, a new report by the Pew Research Center showed.

Last year was the first time on record when there were more Central Americans apprehended at the border than Mexicans.

For Southern Arizona, the decline in Mexican arrests is similar.

Officials with U.S. Customs and Border Protection said the agency has apprehended 38,727 Mexican nationals in the last nine months, a 31 percent decline from the same time last year for the Tucson sector of the Border Patrol.

The Tucson sector ranges from the Arizona-New Mexico border to Yuma County. 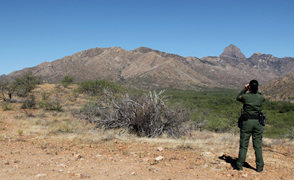 In fiscal year 2014, an estimated 229,000 Mexican undocumented migrants were apprehended, a sharp drop from a peak of 1.6 million apprehended in 2000.

“The decline in apprehensions reflects the decrease in number of unauthorized Mexican immigrants coming to the U.S.,” the report said.

Santa Cruz County Sheriff Receives Highest Civilian Award in Mexico $1.2B Proposed Savings on Immigrant Detentions 'Illegal' Restaurant Set to Open Despite Protests of Latinos
By posting comments, you agree to our
AZPM encourages comments, but comments that contain profanity, unrelated information, threats, libel, defamatory statements, obscenities, pornography or that violate the law are not allowed. Comments that promote commercial products or services are not allowed. Comments in violation of this policy will be removed. Continued posting of comments that violate this policy will result in the commenter being banned from the site.