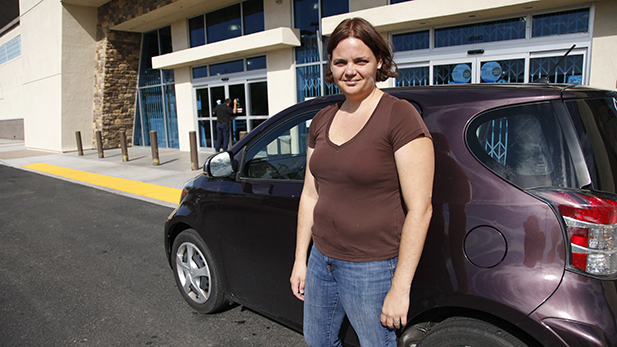 Lynn Knuckles was a bus rider until she purchased her car in March. When she heard about the strike she decided to start offering rides to stranded riders via Reddit.
Mariana Dale, AZPM

Lynn Knuckles doesn’t usually drive in the rain, but when a stranded bus rider emailed her from a McDonald’s on Tuesday night, she made an exception.

“I couldn’t leave a guy out there in that weather by himself,” Knuckles said.

Knuckles is a single mom and until two months ago said she was an insurance claims adjustor. She heard about the bus strike that interrupted travel for more than 60,000 Tucsonans when 530 Teamsters Union drivers, mechanics and other workers walked off the job seeking higher wages and improved working conditions.

For the last two days, Knuckles has been giving rides to those who would normally take the bus.

”I am currently jobless and have a small car but I remember being without a car when they went on strike last time. If you need a ride hit me up. Chipping in for gas is appreciated. Not trying to make a profit.. just trying to help people. I have booster seat / car seat if need help getting kids to and from can hold two small kids and one adult or two adults, one slightly squished... but it's better than ramifications of not being able to get to work.”

Though some email her, Knuckles has found most of the 30 people she’s picked up at bus stops. Some have waited for hours.

Denisha Reed was waiting at a bus stop on Alvernon Way and Speedway Boulevard in a lime-green Walmart vest.

At first, she thought Knuckles was also waiting for the bus.

“I thought she was going to ask me what time the bus was going to come,” Reed said. “I wasn't expecting to get a ride today, but God blessed me today.”

The pregnant mom of a 3-year-old has two jobs, one at Walmart and another as a manager at a McDonald’s.

“I’m trying to do the best I can,” Reed said. “I don’t want it to stress me out too much much so I end up going into labor.”

Knuckles offers the woman her email in case she needs a ride home after her shift.

“Spreading out the good karma”

Lately, after Knuckles drops her daughter off in the morning, she spends the day filling out job applications and following leads via email.

She said she’s filled out more than 100 applications for work in insurance and medical offices and clerical work.

“I could give a laundry list of things that have gone wrong,” Knuckles has said of her recent luck.

Her phone has broken three times in the last month, for starters. That makes it difficult to follow up on potential interviews.

In a small way, her carpool stint reminds her of her job as a claims adjustor. She felt like she was helping people down on their luck.

“I could sit at home filling out job applications day in and day out until I go blind and watch Netflix and cry myself to sleep but I’d rather be out helping people,” Knuckle said.

“Can I ask where you’re going?”

When Knuckles approaches a crowded bus stop, she knows she can only offer a ride to one, maybe two people, if they don’t mind the tight squeeze in her coupe compact car.

Robbie Fimbres accepted her offer from a group clustered at a stop near Alvernon Way and Ft. Lowell Road.

On a normal day, he takes three buses to get to work cleaning floors at a retail store by 7:35 a.m.

Now his commute includes a mile walk and two different bus changes. When the buses arrive, they’re sometimes too full to take new passengers. He’s tried biking and it takes him more than an hour.

“I’m not going to lie to you, it’s very stressful,” Fimbres said. “I have to explain to my boss that they’re on a strike...He’s got to trust me that I go to work everyday.”

Fimbres works part-time making $10 an hour. He said that money supports him and his mother, who has throat cancer.

“It hurts me because sometimes she calls me at work and she wants me to get home right away,” Fimbres said, and without the buses, that takes more than an hour.

Knuckles drops Fimbres off less than half an hour after pick up – a small fraction of the time it would have taken him otherwise. With that trip, she has helped almost 30 people get to work, the grocery store and school in the last two days.

Knuckles hasn’t asked for money from any of the people she picks up. She said one man insisted she take $10.

“He left it in the car and took off because I wouldn’t take it from him,” Knuckles said.

With that money and her car’s economic gas mileage (up to 35 miles per gallon if she keeps the AC low). Knuckles estimated she can keep giving rides for at least another week.

“I’m spreading out the good karma, seeing if I can help people along the way and maybe the universe will shine down on me,” Knuckles said.

Tucson Bus Strike Ends; Normal Service Resumes Thursday Some Sun Tran Riders Propose Skipping the Farebox 8 of 43 Bus Routes Running as Strike Nears One Week
By posting comments, you agree to our
AZPM encourages comments, but comments that contain profanity, unrelated information, threats, libel, defamatory statements, obscenities, pornography or that violate the law are not allowed. Comments that promote commercial products or services are not allowed. Comments in violation of this policy will be removed. Continued posting of comments that violate this policy will result in the commenter being banned from the site.