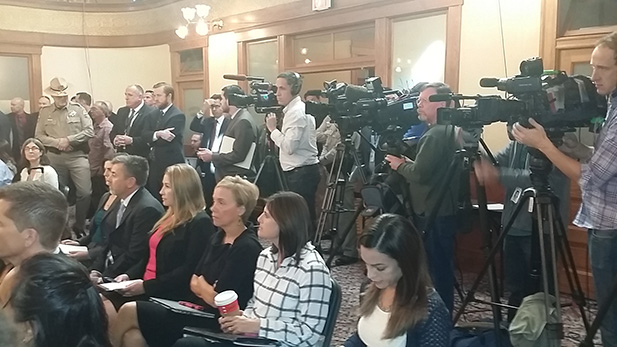 Gov. Doug Ducey said Monday that Arizona is going to war with drug cartels transporting record levels of heroin into the U.S. by intercepting them at the border. Nancy Montoya reports the Governor’s plan is ambitious, but lacks funding.

Ducey testified Monday at a U.S. Senate homeland security hearing in Phoenix that Arizona is the gateway for Mexican drug cartels. The hearing focused on the heroin epidemic.

"And that’s why I have created the Arizona Drug Strike Force Bureau,” Ducey said.

The governor said the Department of Public Safety’s Strike Force went into place quietly two months ago and claimed it has already seized more than 19 pounds of heroin.

“More than the entire amount seized in 2014,” Ducey said.

The head of the DPS, Frank Milstead said his agency has shifted resources to create the force.

“So far there’s no new dollars and no new staffing that is involved with this strike force,” Milstead said.

But Ducey said he will propose more spending next year.

“We are working on the budget right now, but you can look at this being in the tens of millions of dollars,” Ducey said.

This year, Ducey and the Legislature made big cuts in the budget to bring it into balance.

Sheriff: Cartels Forcing Migrants to Traffic Drugs McCain Proposes Bill to Boost Border Agent Pay in Rural Areas Ducey's Drug Strike Force Poses Unanswered Questions
By posting comments, you agree to our
AZPM encourages comments, but comments that contain profanity, unrelated information, threats, libel, defamatory statements, obscenities, pornography or that violate the law are not allowed. Comments that promote commercial products or services are not allowed. Comments in violation of this policy will be removed. Continued posting of comments that violate this policy will result in the commenter being banned from the site.