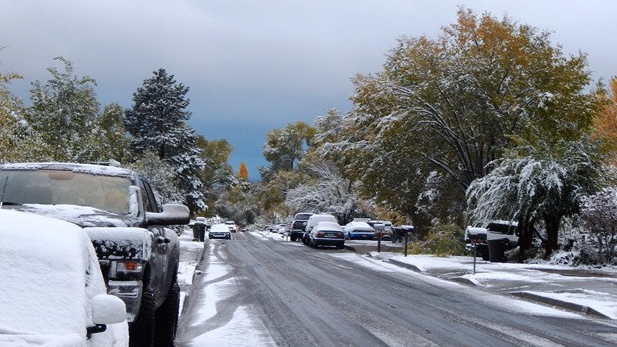 Winter weather in Northern Arizona means icy roads and road crews use a de-icer to keep them clear after the plows move through.

But in Flagstaff, road crews found that the de-icer they used was harming ponderosa pine trees along roadways.

A salt compound called Ice Slicer went into use in 2007, and within a few years, Flagstaff wildland fire manager Paul Summerfelt said he noticed needles turning brown on ponderosa pines along the streets.

"It was fairly evident that we were seeing a correlation between the use of that chemical and the resulting damage to the trees," Summerfelt said, leading to another potential problem: " ... hazard trees. They were going to fall on the road eventually, and we needed to address that issue and remove those."

So it was back to an old-fashioned solution – volcanic cinders, which officials said are more environmentally friendly than salt. But it’s a trade-off. Cinders take more labor and don’t work as well on high-speed roads, they said.

That means more caution on the part of motorists, said Andy Bertelsen, director of public works for Coconino County, which also made the switch back to cinders.

"There’s nothing that's going to save us from winter driving conditions other than ourselves," he said.

Forecast: El Niño Winter Could Bring Snow on Cactus UA Research: Sierra Nevada Snowpack Lowest in 500 Years Snow Pack Not Likely Enough to Minimize Wildfire Season
By posting comments, you agree to our
AZPM encourages comments, but comments that contain profanity, unrelated information, threats, libel, defamatory statements, obscenities, pornography or that violate the law are not allowed. Comments that promote commercial products or services are not allowed. Comments in violation of this policy will be removed. Continued posting of comments that violate this policy will result in the commenter being banned from the site.