Democrats and some Republicans are said to be resisting the governor’s plan. by Christopher Conover TWEET SHARE 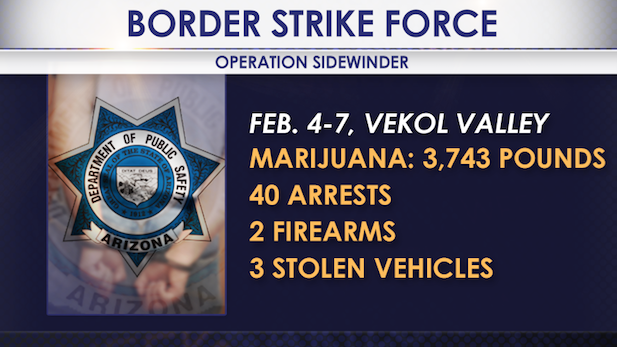 Gov. Doug Ducey's plan to fund his Border Drug Strike Force may be running into opposition in the state Legislature.

The strike force, which has begun operations with existing resources, is meant to bolster the Department of Public Safety to reduce drug and human smuggling in Arizona.

Ducey's budget proposal included $31.5 million for the strike force. That has drawn resistance from some Republicans in the Senate, Sen. Steve Farley, D-Tucson, said.

“I have not seen a bill yet, through the Senate anyway, that talks about establishing that border strike force so there is not a lot of enthusiasm on the part of proactively pushing for it,” Farley said Thursday.

Senate President Andy Biggs, who is known to be cautious of new programs with large price tags, was unavailable for comment, but a spokesman responded to an email inquiry about the funding.

“The Border Strike Task Force is part of the governor’s budget proposal, so this would fall in the category of the president preferring not to discuss budget negotiations through the media,” Biggs' spokesman, Mike Philipsen, wrote in an email.

A staff member in the office of Sen. John Kavanagh, R-Fountain Hills, said Kavanagh was confident the strike force will be funded.

Ducey spokesman Daniel Scarpinato said the strike force did not come up in a budget meeting this week among Ducey, Biggs and House Speaker David Gowan.

House Democrats have not taken an official position against the strike force.

Rep. Eric Meyer, the House Democratic leader, said he would rather see the money invested in schools or given to existing law enforcement.

Arizona Border Sheriffs Say No to Governor's Drug Strike Force Lawmakers, Sheriffs Weigh $30M Border Security Plan AZ WEEK: Ducey Wants $31.5M for Border Drug Strike Force
By posting comments, you agree to our
AZPM encourages comments, but comments that contain profanity, unrelated information, threats, libel, defamatory statements, obscenities, pornography or that violate the law are not allowed. Comments that promote commercial products or services are not allowed. Comments in violation of this policy will be removed. Continued posting of comments that violate this policy will result in the commenter being banned from the site.