First Air Force One Being Prepared for Flight from Marana 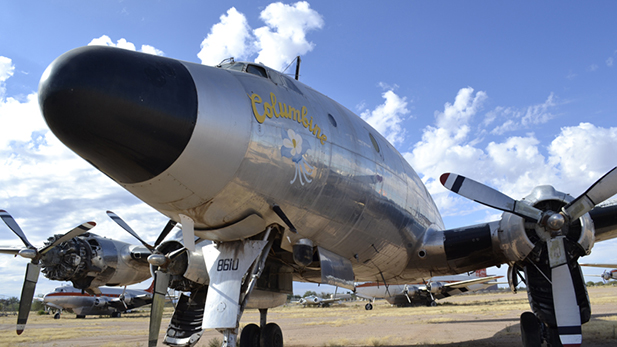 Southern Arizona is home to some well-know retired aircraft.

The list is going to shrink by one in the coming weeks. The Columbine II, the first plane to ever have the call sign Air Force One, is almost ready to leave Marana Municipal Airport.

The Lockheed Constellation was a part of the presidential fleet during the Eisenhower administration, and it almost found a second life as a crop duster after it was sold at auction in the 1970s.

"It just sat there for a while," said Monique Meza, special events coordinator at the town of Marana. "Someone else doing some research on the aircraft and on Air Force One in general happen to find that it was there, and they were the ones that recognized that it was the original Air Force One.”

The most recent round of restoration work to the propeller plane's four engines is almost complete. Its current owner will then have it flown to Virginia, where the interior will be restored.

Once work is completed, the plane will tour air shows around the U.S.

The town of Marana will hold a special event to send the plane off before it leaves. The event will be closed to the public.

'Flying Hospital' to Depart Tucson After 15 Years in Storage Davis-Monthan and Tucson's Economy 40 Years Ago Thursday, Last Copter Left Vietnam; Now at Boneyard
By posting comments, you agree to our
AZPM encourages comments, but comments that contain profanity, unrelated information, threats, libel, defamatory statements, obscenities, pornography or that violate the law are not allowed. Comments that promote commercial products or services are not allowed. Comments in violation of this policy will be removed. Continued posting of comments that violate this policy will result in the commenter being banned from the site.