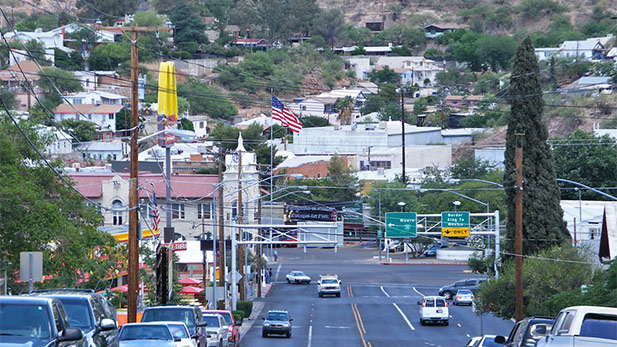 Statistics showed a 33 percent drop in burglaries and a 44 percent decline in aggravated assaults. Nogales reported no homicides in the last two years.

The lower crime rates for Arizona's largest border town coincided with a 30 percent drop in the undocumented migrant population.

Are the two related? Nogales Assistant Police Chief Roy Bermudez said most likely they are.

“Obviously, if illegal entry is down, crime is down,” Bermudez said, adding that a strategic change in policing also contributed.

“Basically, (it's) policing with a purpose," Bermudez said, "going out there and being more visible and more approachable.”

The result, Bermudez said, is that Nogales is one of the safest border towns in the country.

Mayors of Ambos Nogales Grow Cross-Border Relations Southeastern Arizona Firefighting Brigades Bridge Borders US Supreme Court to Hear Cross-Border Shooting Case
By posting comments, you agree to our
AZPM encourages comments, but comments that contain profanity, unrelated information, threats, libel, defamatory statements, obscenities, pornography or that violate the law are not allowed. Comments that promote commercial products or services are not allowed. Comments in violation of this policy will be removed. Continued posting of comments that violate this policy will result in the commenter being banned from the site.