Helios Foundation will work with dozens of high schools, including 20 in Southern Arizona. by Vanessa Barchfield TWEET SHARE 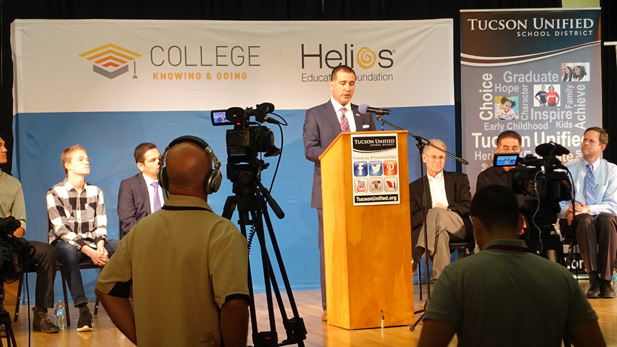 Low-income and minority high school students in Arizona will get help preparing for college under a $5.1 million program unveiled Thursday.

The Helios Education Foundation announced it will work with 83 high schools, including 20 in Southern Arizona, to prepare students for college. The grant will be used to pay for ACT testing, college counseling and the application process and assistance completing the standardized federal student financial aid paperwork.

Thirty-seven percent of Arizona adults have a degree at the associate or higher level, below the national average. For Latino students and other minorities, the number is about half, said Helios Foundation CEO Paul Luna.

Thus the program to assist students and help get 70 percent of Arizona's population to and through college. That is the goal based on what the state's job market will demand at the time.

The program is expected to reach 145,000 students in five years, including at 20 schools in Southern Arizona, among them are TUSD, Flowing Wells, Sunnyside, Vail and Nogales school districts.

Luna said the idea is to make sure that every student in partner schools completes at least one college application.

"We don’t care where it’s at - whether it’s a community college or university," he said. "Because that in itself begins to change the dynamic of the conversation that the students and the parents and the family is having about what that student will be doing after high school."

"There’s actually an achievement gap between kids of color and their peer white students," he said. "And so we want to make sure that we are eliminating that achievement gap and that degree attainment gap."

Can Early Childhood Education Improve Business Community? Episode 76: Planned Cuts Would End Career and Technical Education Poll: Arizona Voters Want Surplus Spent on Education
By posting comments, you agree to our
AZPM encourages comments, but comments that contain profanity, unrelated information, threats, libel, defamatory statements, obscenities, pornography or that violate the law are not allowed. Comments that promote commercial products or services are not allowed. Comments in violation of this policy will be removed. Continued posting of comments that violate this policy will result in the commenter being banned from the site.