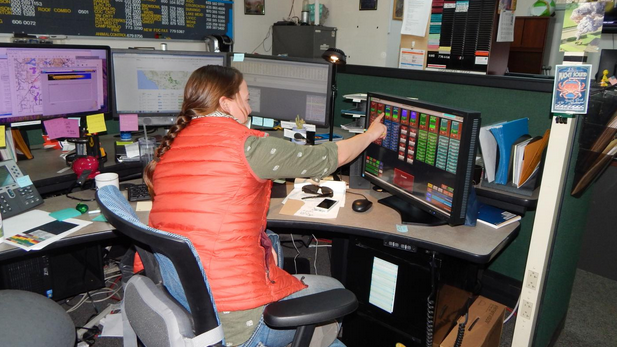 Forest managers nationwide are starting to watch for wildfires with high-tech cameras, sometimes installed on mountaintops where human lookouts have historically kept watch.

Arizona hasn’t yet adopted the technology. When it does, a fire lookout’s job could be made easier, or obsolete.

An incoming call lit a computer screen at the U.S. Forest Service dispatch center in Flagstaff, where Maggie Roberts hit a button to reply to field crews.

Behind her are giant maps of the Coconino National Forest. One shows fire lookout towers. Another has magnets for every fire engine and crew member.

“As they move and change locations we change the magnet, that way we know where people are,” Roberts said.

“They make cameras nowadays that you can get range finders on them - heat, infrared detection,” Walther said. “They’re pretty amazing.”

Walther pointed to a pilot program at the Bridger-Teton National Forest in Wyoming, where the Forest Service has deployed six cameras to spot and monitor wildfires.

“So instead of having to fly a helicopter out into the wilderness area to monitor a fire, or put two individuals out in grizzly bear country to monitor that fire, we can do it with a camera," said Michael Johnston, the project leader.

Johnston said it’s about reducing risk. Cameras let firefighters check the scene before going in themselves. And they’re cheaper than keeping lookouts on the payroll.

Some camera systems, Johnston said, “actually automatically detect the smoke through the software on the camera, and one dispatcher could be monitoring 10 or 20 cameras.”

That’s what’s happening in southern Oregon, where a network of nearly 40 cameras has replaced human fire lookouts. Some of those cameras use infrared to detect fires people can’t see.

Andrew Hostad, a fire prevention officer for the Coconino National Forest, pulled off the dirt road he was patrolling to look at his iPad. It has electronic versions of the maps in the dispatch center to pinpoint the locations of fires and find the quickest route there.

Hostad pointed to the smoke rising from the Cowboy Fire, burning south of Flagstaff. A nearby lookout called in the smoke. Hostad admitted a camera could spot smoke just as well, but he doesn’t think technology can replace actual human lookouts.

“They’re a lot more than just our eyes and ears for detecting wildfires,” Hostad said. “They let us know where people are camping at and potential things to watch out for.”

He said lookouts pass on vital information — about a big storm rolling in, for example, or a group of campers near a lightning strike. They also act as relays for fire crews on the ground, especially in rough terrain where radio communication is difficult.

And Hostad pointed to the symbolic value of lookouts. When hikers make it to mountaintops with historic lookout towers, he said, they want to find a person there.

Forester: 'Active Wildfire Season Has Materialized' Northern Arizona Forest Thinning Work Gets Under Way New letter asks Mexican officials to help stop border wall construction
By posting comments, you agree to our
AZPM encourages comments, but comments that contain profanity, unrelated information, threats, libel, defamatory statements, obscenities, pornography or that violate the law are not allowed. Comments that promote commercial products or services are not allowed. Comments in violation of this policy will be removed. Continued posting of comments that violate this policy will result in the commenter being banned from the site.