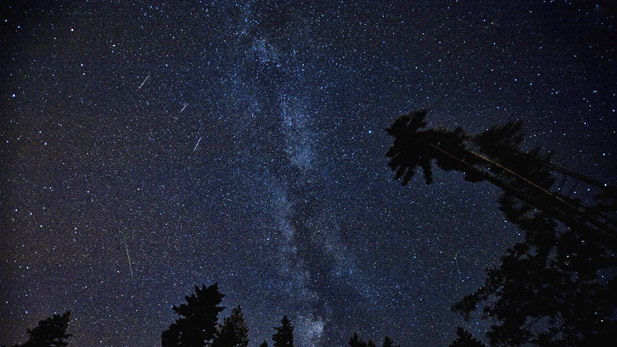 The Perseids meteor shower provides a spectacular show in the night sky.

August is the month of meteors with two showers at the same time.

The Delta Aquarid meteor shower peaks tonight in the southern sky with about 20 shooting stars an hour.

In weeks to come, it will blend with the much more dazzling Perseids.

Between midnight and dawn will be the best time for Arizonans to watch the events.

When they combine, astronomers expect 100 or 200 shooting stars an hour, double the usual number. That’s because Jupiter is lined up just right to nudge Perseid meteors toward Earth.

They’ll radiate out of the northeast and peak on August 12th.

Geminid Meteor Shower To Light up the Sky Meet Outer Space's First Traffic Controller, in Residence at UA "Beyond Earth's Edge: The Poetry of Spaceflight".
By posting comments, you agree to our
AZPM encourages comments, but comments that contain profanity, unrelated information, threats, libel, defamatory statements, obscenities, pornography or that violate the law are not allowed. Comments that promote commercial products or services are not allowed. Comments in violation of this policy will be removed. Continued posting of comments that violate this policy will result in the commenter being banned from the site.