One week into pilot program, results far exceed predictions on both sides of line. by Nancy Montoya TWEET SHARE

Commercial truck wait times have been cut 85 percent after one week of a new customs inspections system at the Mariposa Port of Entry in Nogales, federal and local officials said Thursday. 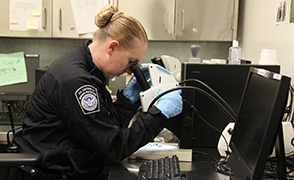 A 90-day pilot program is combining U.S. and Mexican inspections into one stop at the border, and it has cut the time from 3 1/2 hours to less than 30 minutes, Nogales, Ariz., Mayor John Doyle said at a press conference with federal and Mexican customs officials.

“Within a week, if that’s the trend and it continues, I don’t think they are going to have to go to 90 days," Doyle said. "If it continues like that, say, for 60 days, then it is pretty consistent.”

Under the old system, trucks heading to the U.S. were unloaded, inspected by Mexican customs officers, then reloaded before heading to the Mariposa crossing. The process is repeated on the U.S. side.

The reverse has been the case for trucks heading south: First, unload and inspect on the U.S. side, then reload and repeat on the Mexican side.

The duplicate inspections contributed to long waits for trucks crossing, hampering trade between Arizona and Mexico, officials have said.

The improvement is far better than the predicted results, said Gil Kerlikowske, commissioner of U.S. Customs and Border Protection. Kerlikowske was in Nogales to inspect the process, which he said is all about speeding up and cutting costs on trade.

The biggest U.S. import at Nogales is Mexican fresh produce, and that helps feed the country, especially in winter, Kerlikowske said.   “When it’s cold and wintry in the United States, there would not be fresh vegetables on their shelves if it wasn’t for Mexico and if it wasn’t for trade,” he said.

Kerlikowske called the pilot program and the overall trade relationship with Mexico a win-win.

Two months ago, a leading Nogales, Ariz., merchant complained that U.S. Customs was not hiring inspectors fast enough to keep lanes open at the port of entry and move trucks faster. At one point, department store owner Bruce Bracker said, Border Patrol and Customs were down 1,000 positions.

Arizona and Mexico trade had a value of $31 billion last year, the University of Arizona's Economic and Business Research Center reported in April.

Nogales Merchant Blames US Customs for Lost Business Arizona Ports of Entry Funnel Billions in International Trade Renovated Mariposa Port of Entry Reopens in Nogales
By posting comments, you agree to our
AZPM encourages comments, but comments that contain profanity, unrelated information, threats, libel, defamatory statements, obscenities, pornography or that violate the law are not allowed. Comments that promote commercial products or services are not allowed. Comments in violation of this policy will be removed. Continued posting of comments that violate this policy will result in the commenter being banned from the site.