90% of Arizona Latinos Plan to Vote in November, Poll Says

Trump opposition a draw; could be a deciding factor in race for U.S. Senate. by Christopher Conover TWEET SHARE 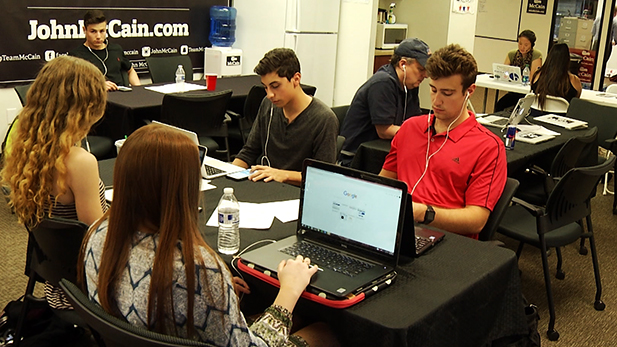 Volunteers make call as part of Unidos con McCain. "I have to prove to them that I am a senator for all of the Arizonans and their community is a most important part of it," John McCain said.
Mariana Dale, AZPM

Nine out of 10 registered Latino voters who responded to a poll said they planned on casting their ballots in November’s general election.

Despite the unusually high numbers found by the poll, which was conducted by Democratic-leaning Latino Decisions and America’s voice, pollster Gabe Sanchez said Latinos still feel left out of the political process.

“We still see a very large percentage of folks indicating nobody has even reached out to them yet.”

Nearly 60 percent of those surveyed said no campaign has been in touch with them.

The results in Arizona mirror national numbers, both of which are defied by a history of low Latino-voter turnout.

But those votes could prove crucial come November, especially in the apparently close race for U.S. Senate, where candidate stances on immigration will likely be a factor.

“The majority of the Latino population across these key states is indicating that it is essentially to stop Trump.”

While the push to block Trump may be a motivating factor in the Latino voting bloc, its effect on the Senate race may not be cut and dry.

McCain pushed immigration reform in 2013, and his Spanish-language website says he supports a path to citizenship for children brought to the U.S. illegally.

However, he also supports Trump.

Arizona GOP Aims To Woo Latino Voters On The Border Latino Turnout in Arizona Could Surge This Election: Poll Could Arizona's Latino Voters Tip the Scale in November?
By posting comments, you agree to our
AZPM encourages comments, but comments that contain profanity, unrelated information, threats, libel, defamatory statements, obscenities, pornography or that violate the law are not allowed. Comments that promote commercial products or services are not allowed. Comments in violation of this policy will be removed. Continued posting of comments that violate this policy will result in the commenter being banned from the site.