The “Horseshoe Fire,” burning five miles west of the Arizona Town of Portal, continues to burn and is expected to take a few more weeks to contain. by Robert Rappaport Tweet

The “Horseshoe Fire,” burning five miles west of the Arizona Town of Portal, continues to burn and is expected to take a few more weeks to contain. 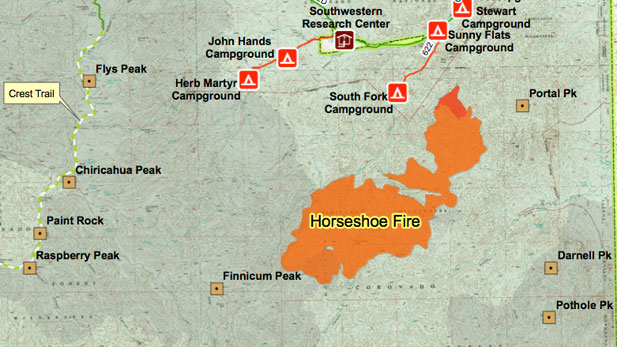 As of Monday, the fire had burned more than 3,250 acres and is only 25 percent contained. More than 130 fire personnel are working to quell the flames, along with three helicopters, two engines and a water tender. So far, the fire has cost nearly $9 million to battle.

The Northern Rockies/Southwest Area Wildland Fire Management Team does not expect to have the fire contained until July 10.

The fire has grown to 3,400 acres and still is only 25 percent contained.

Adrian Fontes wins Democratic primary for secretary of state Heeke named to NCAA committee US to fill border wall gaps at open area near Yuma
By posting comments, you agree to our
AZPM encourages comments, but comments that contain profanity, unrelated information, threats, libel, defamatory statements, obscenities, pornography or that violate the law are not allowed. Comments that promote commercial products or services are not allowed. Comments in violation of this policy will be removed. Continued posting of comments that violate this policy will result in the commenter being banned from the site.