Feeding Our Future: Shortening the Line

The Community Food Bank of Southern Arizona is trying new strategies to solve the root causes of hunger. by Laura Markowitz Tweet 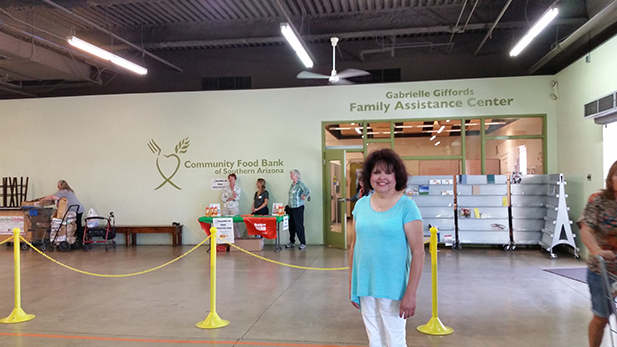 Marty Delsid changed her life through the Community Food Bank’s gardening programs. Now she’s one of the volunteers.
Laura Markowitz

Every year, one in five people in Southern Arizona needs hunger relief aid. While food banks around the country talk about “feeding the line” of hungry people at their doors, the Community Food Bank of Southern Arizona is investing in programs that shorten the line.

In the parking lot of the Community Food Bank of Southern Arizona, Marty Delsid sat in her car. She was too nervous to get out. She remembers feeling sure that people would stare at her and think: “Oh, look, there’s a deadbeat. There’s a cheater. Oh look, now there’s someone else who’s trying to scam the system.”

Until recently, Delsid had been middle class, with a good job as a respiratory therapist. She managed a sleep study lab. Then she had an accident. She fell while she was skating. Her doctor told her she couldn’t go back to work. So she applied for disability, but it took two years to come through.

When her savings ran out, she had to sell her home. She and her 10-year-old son moved in with her mom. They lived off her mother’s social security check – around $800 a month. 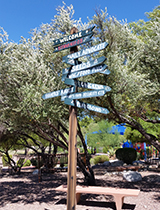 Delsid says they were frugal. “We did all the right things and we didn’t go out for fast food. We cooked at home, rice and beans, tortillas --things that are inexpensive. But there did come a time where we went through all our pantry and there was just nothing left in there.”

And there was no money left. So she found herself at the Community Food Bank. Braced for humiliation, she got out of the car and went inside the giant warehouse on Country Club and Ajo.

“They greeted me and said, ‘Hi! How are you doing!’ and pointed me to the line I needed to go in,” Delsid recalls. It was the line for emergency food boxes. There’s no paperwork required. People in need can pick one up once a month.

Delsid remembers what was in that box: “We got a pound of beans, a pound of rice, some cans of vegetables, a loaf of bread, cranberry sauce.”

As she was starting to leave, Delsid said a volunteer stopped her and mentioned, “By the way, we’re having a garden class meeting right now if you’re interested in gardening. The garden’s right around the corner and you can go in and just see if it interests you at all.” 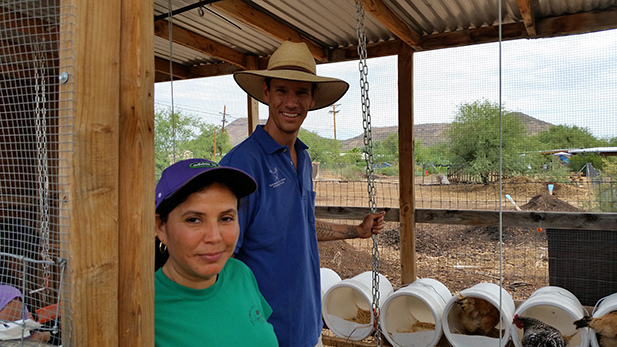 The Community Food Bank does what you’d expect: it distributes food to the hungry. But it also distributes compost, seeds and gardening expertise. And it runs the Las Milpitas de Cottonwood Community Farm. It’s six acres on the Santa Cruz river, just west of I-10 and south of 29th Street. It’s in the low-income Southwest Santa Cruz neighborhood.

“Here at Milpitas, 98 percent of our gardeners are reducing their grocery bills because of the food they’re producing here,” says Chris Lowen, Farm Operations Coordinator. He’s an employee of the Community Food Bank. “Our gardeners at Milpitas are eating an increased number of fruits and vegetables.”

The annual budget for the Las Milpitas de Cottonwood Community Farm is $300,000. Is this the best investment of resources? 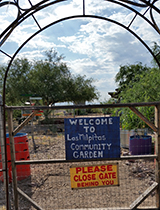 There are no supermarkets in the neighborhood. As you come into the garden there’s a hand-written sign that says: “Fresh Eggs. Call Panchita.” Las Milpitas has 40 chickens and two roosters. Panchita Cruz – the one selling the eggs – takes care of the chickens with her family, and she also grows vegetables in one of the plots here.

Give a person a squash and she eats for a day. Teach her how to grow squash, and she and her family can eat for a lifetime. That’s what the Community Food Bank is hoping. They also hope Cruz and the other 60 families who grow food here will make extra cash selling their surplus.

“Every Thursday, I go to the farmers market,” says Cruz.

The Community Food Bank runs three weekly farmers markets. People on the Supplemental Nutrition Assistance Program, or SNAP, can double their benefit up to $20 when they buy food at the Food Bank’s farmers’ markets.

“The Community Food Bank is a leader nationally in moving food banks away from simply providing food, to addressing food insecurity,” says Diane Austin. She is Director of the University of Arizona’s School of Anthropology. Her students conduct an annual survey of Community Food Bank clients . Nearly half of those who complete the survey are picking up the boxes not once or twice a year, but every month.

“When you realize that a lot of this isn’t about ‘emergency,’ then you really have to take a different focus,” says Austin.

“We are a food-related business, so can we help people use food to grow the business of their lives?” --Michael McDonald, CEO, Community Food Bank

That’s why the Community Food Bank began to offer programs that have the potential to create pathways out of poverty – like their gardening initiatives, and job training in the food services industry through Caridad Community Kitchen.

“We are a food-related business,” says McDonald, “so can we help people use food to grow the business of their lives?” 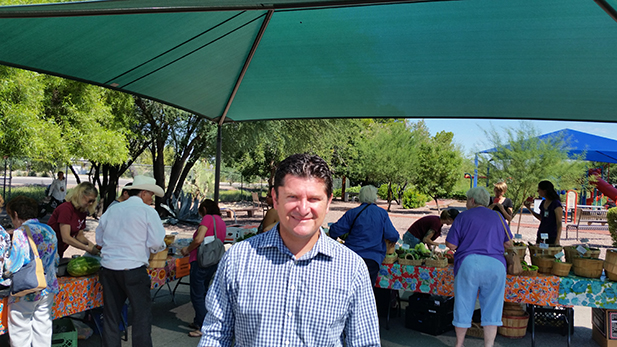 The Community Food Bank also has a micro-lending program for low-income food entrepreneurs, and a program that helps small farmers sell their produce to institutions and make more money. The Community Food Bank’s Chief Program Officer, Robert Ojeda, says these kinds of programs give people a sense of personal agency. Instead of turning to the food bank for a handout, they partner with the food bank to feed their own families and help their own communities.

Ojeda says the Community Food Bank has run programs to try to shorten the line for more than a decade, but more recently the organization went through an internal process of asking questions about its core mission. “What does success mean for us?” says Ojeda. “Is it about more trucks? Is it about more buildings? Is it about bringing more food? Or is it about thinking about how we can support families in meaningful ways?”

The answer was “Both.” So the Community Food Bank made a commitment to expand its shorten-the-line programs.

“Our self-sufficiency, sustainability shorten-the-line programs are as important as our feeding programs,” says Ojeda.

Shorten-the-line programs take significant investment. The annual budget for the Las Milpitas de Cottonwood Community Farm is $300,000. Is this the best investment of resources? The Community Food Bank could just give the 60 families who have garden plots $5,000 each to buy squash at the store.

The Food Bank runs a series of programs that teach community organizing skills. 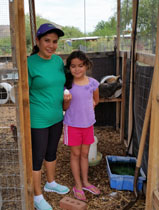 Panchita Cruz and her daughter take care of 40 chickens at Las Milpitas and sell the eggs for extra cash. (PHOTO: Laura Markowitz)

“It’s not just about food,” says Ojeda. “It’s about empowering people to transform their own communities.” He says the Community Food Bank partners with low-income people and helps them do the work themselves to make positive changes. He says that’s exactly what happened at Las Milpitas and the Santa Cruz Southwest neighborhood. “There’s a group of about fifteen community leaders that helps us with the farm. One of them is now -- because of her participation -- president of her neighborhood association

“Since we started with the garden I’m the president,” says Panchita Cruz with a laugh. She says it happened because of Las Milpitas. She got to know her neighbors while they tended their garden plots. They complained to one another about cars speeding down Cottonwood Lane. That’s the main road in the neighborhood. It’s where kids wait for the school bus. People who work late or have two jobs have to walk home in the dark because there are no streetlights. When Cruz realized other neighbors were concerned about the same things, she decided to run for president of the Southwest Santa Cruz Neighborhood Association so she could do something about it.

She says the Community Food Bank taught her how to lead meetings and organize. The Food Bank runs a series of programs that teach community organizing skills to activists so that they can be more effective advocates and leaders. Cruz learned how to navigate bureaucracies, and how to apply for a Neighborhood Reinvestment Grant from Pima County.

That grant came through. The neighborhood received $250,000 for upgrades to Cottonwood Lane, including solar lights, speed bumps and walking paths. 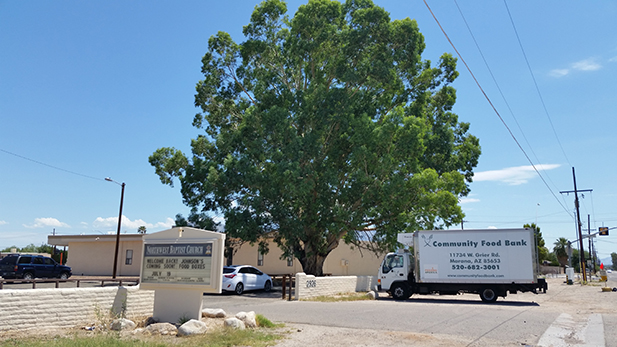 The Community Food Bank counts this as a huge success even though it has nothing to do with hunger relief. The residents were able to bring resources into their community and advocate for what they needed.

Robert Ojeda says it’s empowering. When people who need the Community Food Bank start to see themselves as partners instead of clients, they’re more likely to seize opportunities and move themselves out of poverty. Maybe they go back to school, or find a better job.

Ojeda says this work is very personal. He grew up in Peru, and after his father got cancer his mother – a teacher who had grown up in New Jersey – had to work hard to take care of four kids.

“I know there were times when she would actually go and ask neighbors or family members for money or food,” remembers Ojeda. “Every I time I think about that, I think about how humiliating it must have been for her, a hardworking person, to have to go through that experience. And so partnering with somebody brings that dignity that I think is so important to me. I don’t want people to have to go through those painful experiences. 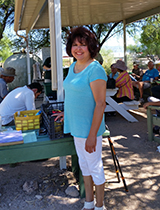 Remember Marty Delsid? She went to pick up a food box and was invited to check out a gardening class? She ended up taking three. She made friends there. Her depression lifted. She became a vegan. She lost 50 pounds and got her diabetes under control. Now she’s one of those volunteers who invites Community Food Bank clients to try a gardening class.

“Marty is one of the best ambassadors for what we do,” says Ojeda. “She now sits on our Board of Directors.”

Delsid shares the boardroom table with a former congressman, business executives and university professors. She has a voice and a vote that shapes the Community Food Bank’s policies. She advocates for people like her – people they call “clients,” but hope one day to call “partners.”

Tune in to Arizona Spotlight or log on to AZPM.org next week for Feeding Our Future, Episode 5: Harvesting the Desert Next week, on NPR 89.1.