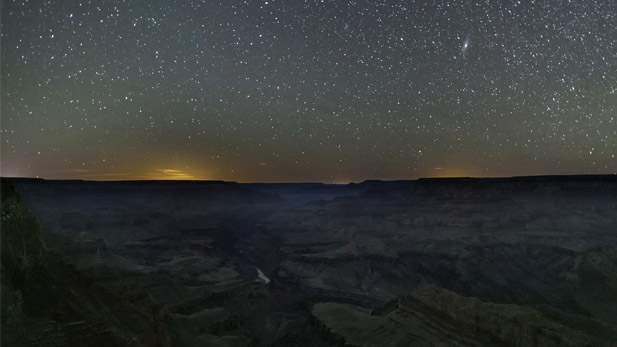 A field of stars lights up the night sky above the Grand Canyon in northern Arizona.

A four-year project led by Northern Arizona University will examine how political boundaries can create ecological differences. Researchers will look at the edges between national parks and nearby land … from space.

The team will study satellite images of five national parks in the western U.S. They’ll look for divisions caused by different land-management choices, such as logging and grazing.

“A real piece of evidence that led us to this question was the fact that you can see the line between Grand Canyon National Park and Kaibab National Forest from space,” Aslan said. “Seeing that so clearly really made us wonder, ‘Well, is this always the case?’”

Aslan will sample vegetation and interview land managers at each park. She wants to see how their decisions shape the landscape, and if those differences go away when they collaborate.

The National Science Foundation awarded the project $1.3 million. Data collection will begin at all five national parks next year.

Record Numbers Visit Saguaro National Park, Mirroring National Trend At Arizona's Kartchner Caverns, Science Supports Stewardship — And Vice Versa NAU Crew Finds Bacteria Clue by Scooping Pooch Poo
By posting comments, you agree to our
AZPM encourages comments, but comments that contain profanity, unrelated information, threats, libel, defamatory statements, obscenities, pornography or that violate the law are not allowed. Comments that promote commercial products or services are not allowed. Comments in violation of this policy will be removed. Continued posting of comments that violate this policy will result in the commenter being banned from the site.