Arizona GOP Aims To Woo Latino Voters On The Border 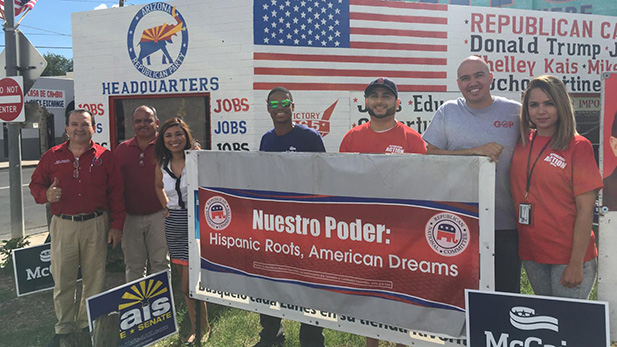 NOGALES, Ariz. — Arizona’s Santa Cruz county on the Mexican border is what Republican operative Sergio Arellano jokingly calls “Democrat heaven.” Only 16 percent of voters are registered as Republicans. More than 80 percent of the population is Latino.

Arellano has been trying to lure more of these voters to the GOP. But this campaign season has been tricky.

“What we encounter on the grassroots is, ‘Republicans are racist. Republicans and Trump want to deport everybody, want to build the wall,’” said Arellano.

Arellano, who is 33 and the son of Mexican immigrants, pushes back on this characterization of his party. He tells people a secure border will also protect Mexican migrants from being exploited or kidnapped by criminal organizations. He emphasizes that Republicans stand for creating opportunity and jobs.

“Jobs, jobs, jobs is what we're standing firm with, and that's what the people want,” Arellano said.

Arellano works for both the Republican National Committee and the Arizona Republican Party. At a time when the growing Latino electorate here is credited with helping to turn conservative Arizona into a potential swing state this cycle, Arellano and others in his party see the importance of winning over Latino voters to the Republican side. 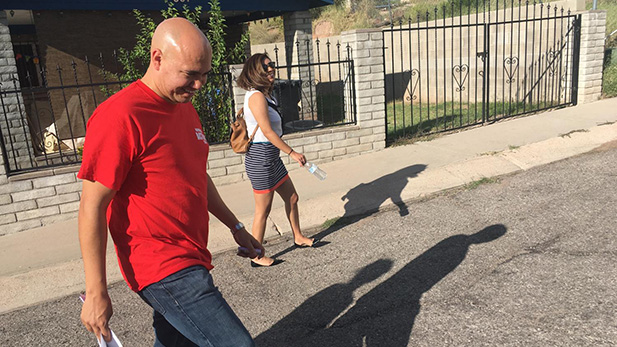 Last month, the Arizona Republican Party opened a campaign field office here in the city of Nogales less than mile from the U.S.–Mexican border. It’s the first time in recent memory Republicans have made such an effort in this area where Democrats have long maintained local control.

“The vote is taken for granted by Democrats,” Arellano said about this area. “We're here to bring an alternative point of view.”

Arellano and his team go door to door talking to voters. They are targeting infrequent voters, independents, Republicans and conservative Democrats.

A first-time voter named Blanca Castro answers the door, and Arellano fluidly switches into Spanish to ask her who she is supporting.

Castro said she is from Mexico and recently naturalized. She is backing Clinton. Arellano tells her Donald Trump will bring jobs.

But Castro isn’t persuaded. And that’s hardly surprising. Some polls show fewer than 20 percent of Latinos support the Republican nominee. Many have not forgiven Trump for saying that Mexico is sending rapists and criminals across the border.

“You have to understand, I’m Mexican, and at least Clinton isn’t racist,” Castro said.

However, Castro does support a local Republican candidate for county supervisor.

As we walk away, we overhear Castro’s family inside the house talking and laughing in Spanish.

Arellano paused to translate. “The husband was talking about, ‘You should have told him Trump is a crook.’”

Arellano has heard it all before. In his book, this interaction was a partial success. 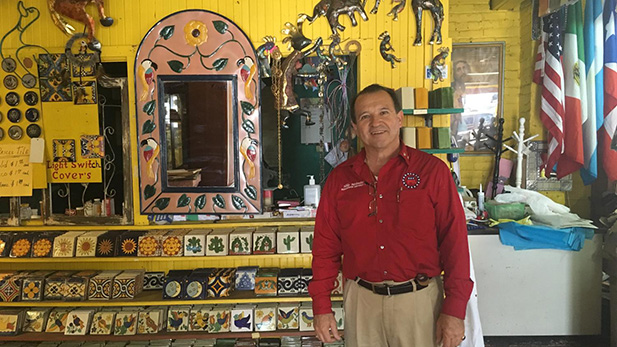 The Republican supervisor candidate in this district is Mike Melendez. He himself is a recent convert to the GOP.

Melendez is at the party’s brand new Nogales campaign office. He owns the building. He sells handmade crafts from his native Mexico out of this store, but this campaign season he is renting out much of it to the Arizona Republican Party.

Displays of colorful Mexican tiles, mirrors and metal animals still greet visitors when they first walk in. Occasionally tourists wander in to shop.

A handful of volunteers, most of them young, Latino and bilingual, made phone calls to voters.

Outside, the slogan “Jobs, Jobs, Jobs” is hand-painted in colorful letters along with the American flag and names of Republican candidates.

Melendez is sick of what he says is a sluggish economy here in Nogales. The three current county supervisors are all Democrats. Melendez is challenging a long-term incumbent.

He believes there are more Latinos like him, ready to switch parties because they haven’t been properly introduced to the Republican Party.

“I didn’t understand why was I a Democrat,” Melendez said. “Because everybody here locally was Democrat or still thinks they are. But they are thinking Republican – for family values and for pro-life.”

That’s the same message Sergio Arellano brings to voters when he goes door to door. He likes to say Latinos are Republicans, but just don’t know it yet.

At one house, a 20-year-old named Yolanda Mejia came to the door dressed in her waitressing uniform for her job at a local sports bar. She is Mexican-American and an independent.

“I always said that if Bernie never made it I was going to go Trump, because he is a better alternative than Hillary,” Mejia said.

Bingo. Arellano invites Mejia to come down to the campaign office and join his team.

“I feel happy,” Arellano said leaving Mejia’s house “Pretty good. But I don’t want her to stop at Trump. I want her to fill out the whole ballot Republican.”

No matter what happens in the presidential race, Arellano hopes his work will build inroads for the GOP with Latinos in this part of Arizona.

Group Aims to Register 9k Hispanic Voters for Midterms 'Federal-Only' Ballots Limit Some Arizonans in Voting Study Reports Fastest-Growing Wage Gap is Among Latinas
By posting comments, you agree to our
AZPM encourages comments, but comments that contain profanity, unrelated information, threats, libel, defamatory statements, obscenities, pornography or that violate the law are not allowed. Comments that promote commercial products or services are not allowed. Comments in violation of this policy will be removed. Continued posting of comments that violate this policy will result in the commenter being banned from the site.