If the rate of greenhouse emissions stays the same, it will likely hit by the end of the century. TWEET SHARE 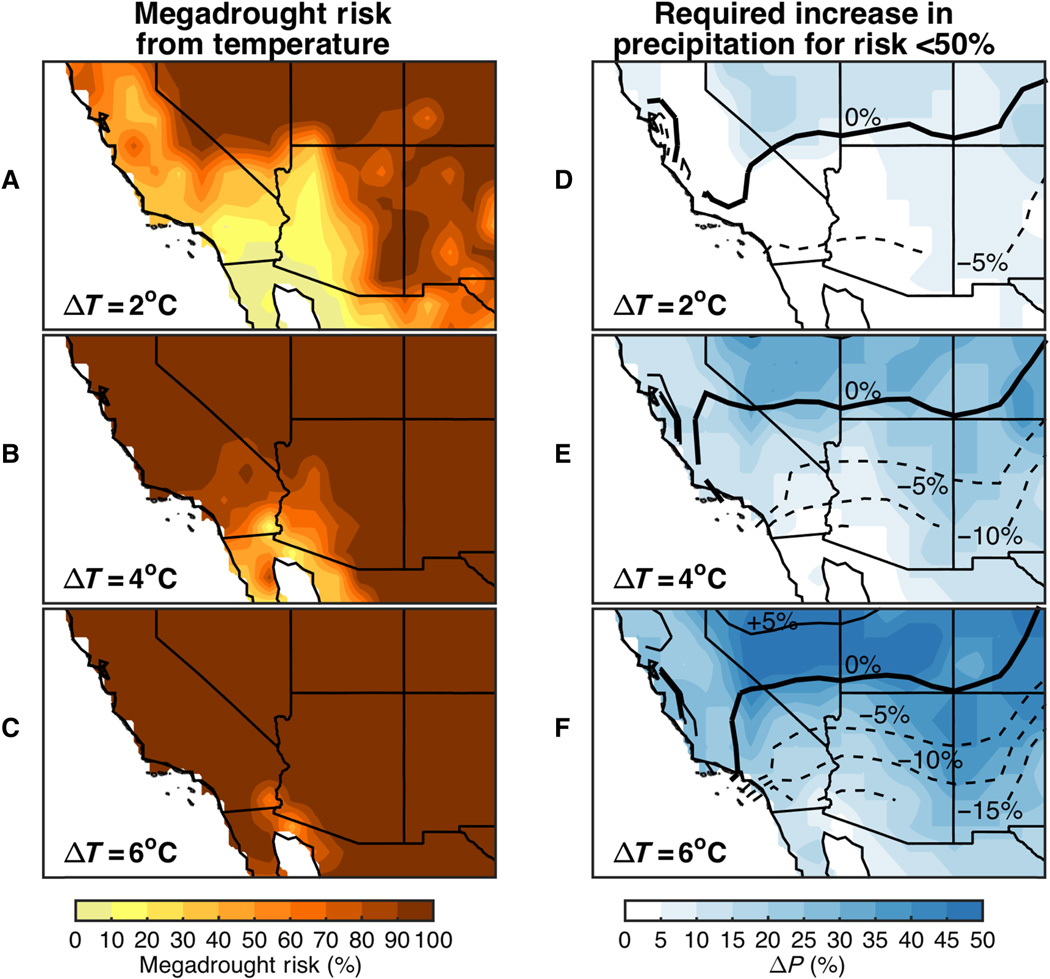 Maps of megadrought risk for the Southwest United States under different levels of warming and the amount of precipitation needed to compensate (bring risk under 50 percent).
Courtesy of Science Advances
By Nicholas Gerbis, Arizona Science Desk

The risk of a severe, multi-decade drought hitting the Southwest United States by the end of the century could reach as high as 99 percent if greenhouse gas emissions continue along current lines, says a paper by a team of scientists from Cornell University, Columbia University and NASA.

The climate-model-based study, which appeared in the Oct. 5 edition Science Advances, pins the risk at 70, 90 or 99 percent. The different estimates reflect scenarios with more, equal or less precipitation, respectively.

“That high end reflects what happens when — not only does the atmosphere warm, and therefore demand more moisture from the land’s surface — but also you have a decrease in precipitation,” said Toby Ault, a Cornell University climate scientist and the paper’s lead author.

“And there’s a double-whammy, because you’re not only increasing demand for moisture, you’re also reducing supply.”

Some climate models predict megadroughts could comprise conditions worse than the driest droughts of the last 1,000 years.

Using the same standard climate models as the Intergovernmental Panel on Climate Change’s Fifth Assessment Report, the researchers studied which conditions were most likely to cause a megadrought, which they defined as “a multidecadal (35-year) period of aridity as bad as, if not worse than, the worst droughts of the 20th century.”

They then analyzed the outcomes using a probability density function, which Ault said is a bit like calculating a batting average — it provides a sense of likelihood, not a forecast.

“The nuance of our approach was to add to the analysis of the raw model output a more extensive statistical framework for calculating and estimating risk, so that we could map out a very wide range of plausible future climates and then ask how the existing generation of models plotted into that range, or mapped onto that range, of future plausible climates,” said Ault.

Ault and his colleagues found that megadrought risk was most strongly tied to temperature increases, followed by a harder-to-pin-down precipitation changes. They also noted that precipitation-based climate studies had previously underestimated the odds of megadroughts.

Precipitation is a major source of uncertainty in climate models. Some simulations predict increases, while others forecast decreases — or no change all.

“We were surprised to find that, even under scenarios where precipitation increases in the Southwest, the risk still goes up because of those substantially higher future temperatures" - Toby Ault

The complex coupling of temperature, precipitation and soil moisture further complicates the picture. Warmer air is able to hold more moisture and draw more of it out of plants and soil.

As for temperature increases, the tipping point appears to fall in the zone between 1 to 2 degrees C (1.8 to 3.6 degrees F). Below 1 degree C, and assuming no change in precipitation, megadrought risk remains below 20 percent.

“They don’t go down to zero — they don’t even go down as low as they used to be because the Southwest is still warmer — but it certainly reduces the risk,” said Ault.

Above 2 degrees C, however, risks begin to rise. And, said Ault, if temperatures in the Southwest rise by 5 degrees C (9 degrees F) or more — which at least one model says could occur under business-as-usual greenhouse gas emissions — then megadrought risk approaches near-certainty.

“We were surprised to find that, even under scenarios where precipitation increases in the Southwest, the risk still goes up because of those substantially higher future temperatures,” he said.

Megadroughts are rare in history. They take place only once or twice per 1,000 years. But if nothing is done to affect climate levels, say the researchers, they could become all too common.

So how bad is the news? As with any risk assessment, the paper provides probabilities, not predictions. It’s still conceivable that no megadroughts will occur — just as it’s possible that a .700-plus batter won’t get a hit.

Ault is quick to emphasize that there is still hope, if we act now. An aggressive policy of greenhouse gas reduction, he said, could cut megadrought risk nearly in half.

“It shows us that there’s still a lot of value in pursuing mitigation strategies to curb megadrought risks,” he said.

Climate Change is Making Droughts Worse In the Western US, Study Says Winter Rains Diminish Desert Drought Navajo Nation Maps Drought with NASA Satellites
By posting comments, you agree to our
AZPM encourages comments, but comments that contain profanity, unrelated information, threats, libel, defamatory statements, obscenities, pornography or that violate the law are not allowed. Comments that promote commercial products or services are not allowed. Comments in violation of this policy will be removed. Continued posting of comments that violate this policy will result in the commenter being banned from the site.