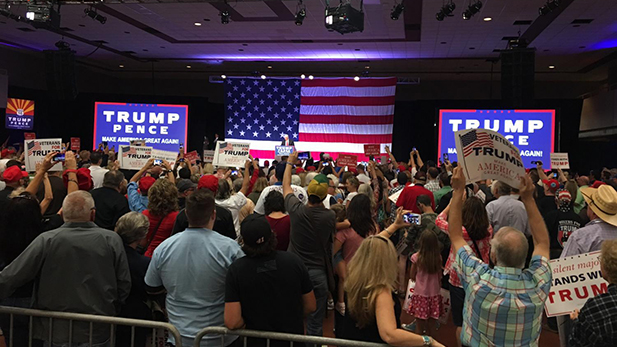 Gov. Doug Ducey introduced Pence and touted his record as governor of Indiana.

"Mike knows that government does not create jobs, so he got out of the way and let the free market thrive,” Ducey said.

It's likely many in the audience had already cast their vote, like more than 1 million Arizonans.

John Coulthard had, but was still in line before 8 a.m. to get a seat.

"I'm here because I want to do my utmost to get the person in the White House that can save the country from ruin, in my opinion," Coulthard said.

Coulthard, who carried a small notebook to take notes said he wanted to hear Pence address a plan for creating more full-time jobs for citizens and reining in illegal immigration.

He said Mike Pence added focus to the GOP ticket.

"He gives more of the impression of being presidential actually than Donald Trump does."

Trump, McCain, McSally Keep Arizona a Red State Trump Keeps Arizona Red, Turns Nation Red, Too Does FBI Probe Affect Presidential Race in Arizona?
By posting comments, you agree to our
AZPM encourages comments, but comments that contain profanity, unrelated information, threats, libel, defamatory statements, obscenities, pornography or that violate the law are not allowed. Comments that promote commercial products or services are not allowed. Comments in violation of this policy will be removed. Continued posting of comments that violate this policy will result in the commenter being banned from the site.