Mexico Moves to Allay Economic Uncertainty After US Election 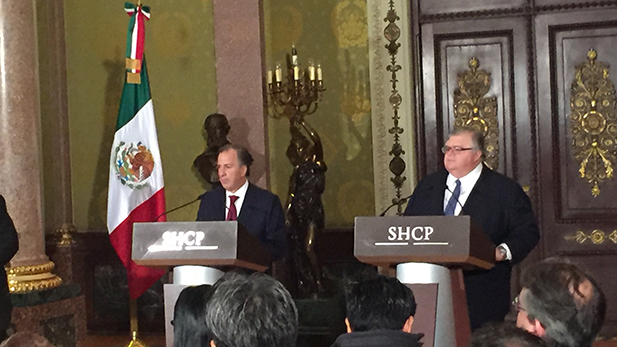 MEXICO CITY — Immediately following the elections, the government of Mexico set itself to keeping the economy running and bolstering its commercial relationship with the United States.

The morning after Donald Trump was announced president-elect, uncertainty hit the Mexican stock market and the peso. While Mexico’s stock market (La Bolsa Mexicana de Valores) opened with a loss of 2.02 percent, the Mexican currency reached its lowest price against the American coin: $20.35 pesos per dollar.

The Mexican government immediately reacted to avoid more speculation and damages to the economy. At 7 a.m., right before the markets opened, Mexican Treasury Secretary José Antonio Meade and Agustín Carstens, governor of the Central Bank of Mexico, offered a press conference to ease post-election anxiety.

“The result of the U.S. elections will not have a direct impact in commercial and financial regulations,” Meade said.

“Mexico has enough strength to face changes in the environment,” he said, explaining that the financial strategies from the federal government, as well as the recently implemented reforms, will keep the Mexican economy strong, the inflation low and trade flowing.

Meanwhile, President Enrique Peña Nieto congratulated the people of the U.S. for the elections via Twitter. He suggested collaboration with the American president-elect in developing the region.

“Mexico and the U.S.A. are friends, partners and allies that must continue their collaboration for competitiveness and development of the North American region,” reads one of Peña Nieto’s tweets.

And while the future of trade agreements with the U.S. remain uncertain with Trump as president — particularly since he campaigned on a promise to revise NAFTA — members of the Mexican Senate are pushing for a quick approval of the Trans-Pacific Partnership Agreement, which would lessen Mexico’s dependency on the American market.

On the other hand, American Ambassador to Mexico Roberta Jacobson made a public statement with hopes for a stronger relationship between both nations under the new administration.

“Change can sometimes generate anxiety, but like I have said in numerous times, I have confidence that our relationship has strong roots in our shared values and interests,” Jacobson’s wrote.

Bank of Mexico Wants Reduced Economic Dependence on US Mexican Shoppers Spend Big in Tucson During Holiday Season Flake Vows To Support Trade In Talks With Mexican Officials
By posting comments, you agree to our
AZPM encourages comments, but comments that contain profanity, unrelated information, threats, libel, defamatory statements, obscenities, pornography or that violate the law are not allowed. Comments that promote commercial products or services are not allowed. Comments in violation of this policy will be removed. Continued posting of comments that violate this policy will result in the commenter being banned from the site.