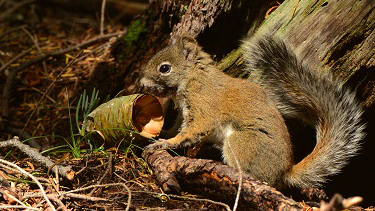 The number of squirrels in the Pinaleño Mountains near Safford dropped by 11 in the past year. This year’s estimated squirrel population is 252 animals.

The Game and Fish Department said it’s not unusual for the population numbers to vary from year to year.

Mount Graham red squirrels live only in the upper-elevation conifer forests of the Pinaleños and feed primarily on conifer seeds. Females produce two to seven offspring a year.

The species was declared endangered nearly 30 years ago. The red squirrel population peaked at about 550 animals in the late 1990s, and now ranges between 200 and 300 animals.

Summer Fire Destroys Habitat, Food of Endangered Red Squirrel See a Young Cooper's Hawk on the Ground? No Need for Concern Arizona Still Untouched by Disease Deadly to Deer
By posting comments, you agree to our
AZPM encourages comments, but comments that contain profanity, unrelated information, threats, libel, defamatory statements, obscenities, pornography or that violate the law are not allowed. Comments that promote commercial products or services are not allowed. Comments in violation of this policy will be removed. Continued posting of comments that violate this policy will result in the commenter being banned from the site.