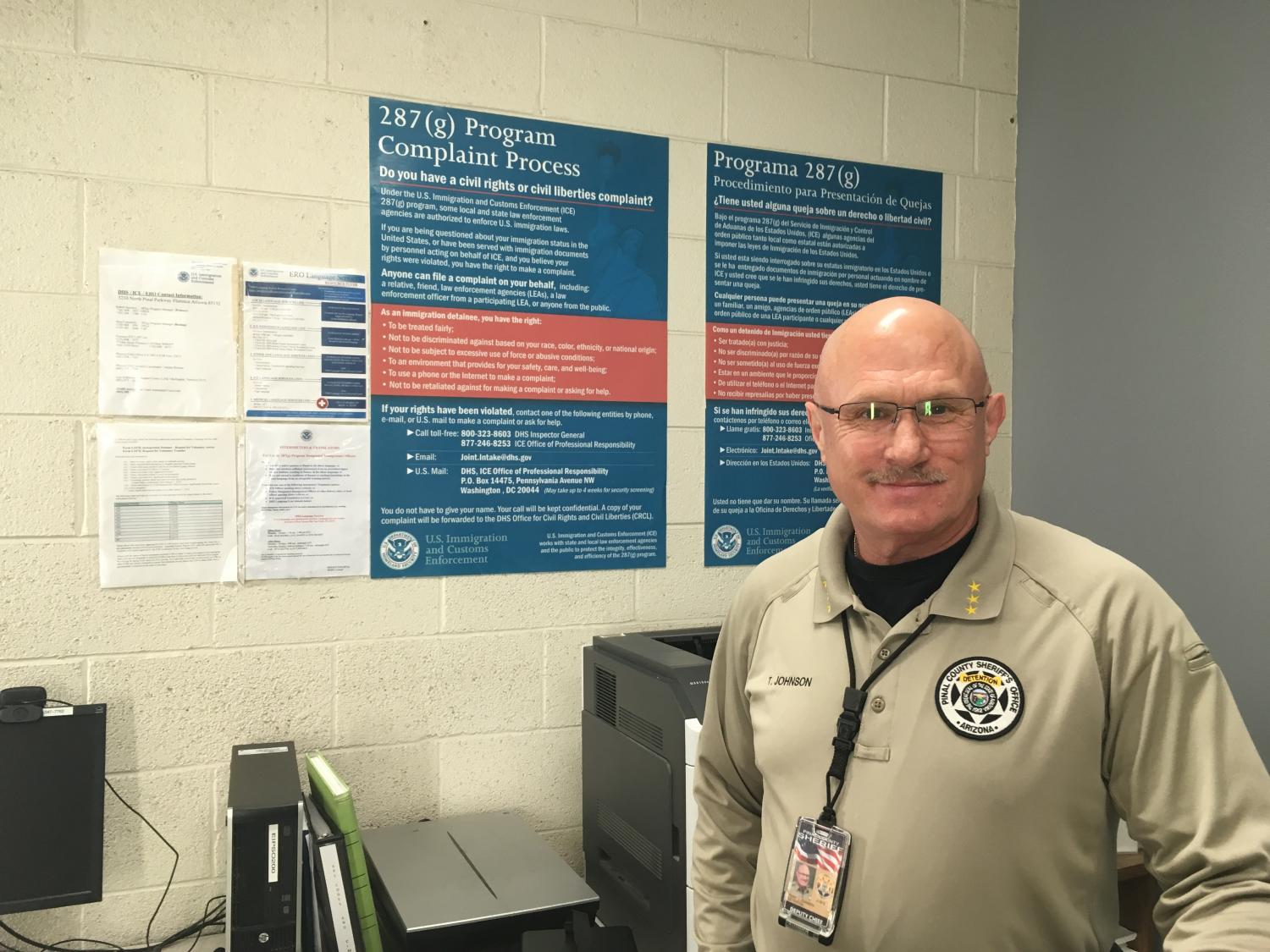 VIEW LARGER Terry Johnson of the Pinal County Sheriff's Office stands in the section of the jail where officers interview non-citizens who might be deportable.
Jude Joffe-Block, Fronteras Desk

President-elect Donald Trump has promised to ramp up deportations of immigrants with criminal records.

There is already an infrastructure in place to identify immigrants in the criminal justice system who might be deportable. But efforts to accelerate and increase deportations will partially depend on local cooperation, which was an obstacle for the Obama administration.

Already at most jails throughout the country, non-U.S. citizens who are booked into jail will be flagged so federal authorities can decide whether to initiate deportation proceedings.

At the Pinal County Jail in Florence, one of the first stops for arrestees is the fingerprint station. Their prints reveal not only past criminal histories, but they also are checked against federal immigration databases.

“It could identify somebody who had done time in this country before and been deported,” said Terry Johnson, the head of adult detention for the Pinal County Sheriff’s Office.

Another program that helps federal authorities identify immigrants who come through local jails is the 287g jail program, which is a collaboration between the Sheriff’s Office and U.S. Immigration and Customs Enforcement.

Five Pinal County Sheriff’s Office detention officers were trained by ICE in interview techniques to determine whether someone booked into jail is foreign born. The officers then notify ICE.

Johnson said there is a 287g officer on duty at the Pinal County jail at all times so they can call ICE and “get the hold established so [the arrestees] are not released from our custody until ICE picks them up after the entire adjudication process.”

Those ICE holds at the jail are how immigrants arrested for some other violation wind up in deportation proceedings.

But outgoing Pinal County Sheriff Paul Babeu says the system isn’t working as well it could. “The infrastructure’s there to apprehend, identify and deport these criminals,” Babeu said. “But it's not being used, it's not being enforced.”

Babeu, a Republican, is known for his hardline stance on illegal immigration and is leaving office after a failed run for Congress.

In Babeu’s opinion, things worked better at the beginning of the Obama administration. That’s when the fingerprint checks, 287g and ICE holds all helped deport record numbers of people, including those just accused of crimes or pulled over for broken taillights. Deportations reached a peak in fiscal 2013, with more than 435,000 people deported that year.

But after a backlash from immigrant-rights advocates and local governments, the Obama administration reacted by instructing ICE agents to use prosecutorial discretion to focus on deporting people that fell into priorities, such as those already convicted of certain crimes and recent border crossers.

Babeu says that after that change, in his view, some immigrants who should have been deported were not. He can rattle off examples of immigrant offenders who committed new crimes after they were released from jail.

Babeu wants to see Trump reverse the use of prosecutorial discretion and revive the field version of 287g, which gave local police officers on the street immigration-enforcement powers.

“We're talking hundreds of thousands of law enforcement across America,” Babeu said. “Local county state law enforcement working in partnership with our sisters and brothers in ICE and the Border Patrol to protect our country.”

Pinal County sheriff’s deputies were once part of the 287g field program, and Babeu said it worked well. But the Obama administration canceled the program in Arizona after the U.S. Supreme Court allowed part of Arizona’s controversial immigration law SB 1070 to take effect.

The entire 287g field program was later abandoned under Obama following allegations it led to racial profiling, but Babeu insists it can be done right. Babeu got to share his immigration policy ideas with Trump when he campaigned alongside him this fall in Arizona.

“I told him numerous stories here, and he says we're going to fix all that,” Babeu said. Trump told "60 Minutes" last month he would immediately move to deport 2 to 3 million people here illegally who have criminal records.

But there might not be that many in that category.

Jessica Vaughan of the Center for Immigration Studies, a think tank that favors stricter enforcement, said that population is an “appropriate first target for the Trump administration.” She recommends Trump revive the 287g field program to help with that goal.

Vaughan said she expected to see a lot of progress quickly, though she said less than half of those immigrants with criminal histories are currently in custody.

“Most of the rest have already been released and are at large in the American communities,” Vaughan said. “So it will take some time to find them.”

That isn’t the only challenge.

For one, immigration courts are already backlogged. Plus, there was a backlash to these policies under Obama that resulted in some local jurisdictions trying to opt out.

Initially, the Obama administration’s fingerprint program to identify immigrants booked into jail was known as Secure Communities. But immigrant-rights advocates began to protest the fact that many immigrants deported under the program were not serious criminals.

“Folks were being pushed into the immigration deportation and detention pipeline that no one really thinks are dangerous,” said César Cuauhtémoc García Hernández, a law professor at the University of Denver.

“A substantial number of the so-called criminal aliens they have been deported under [Obama’s] watch are people who have been convicted of crimes that are no more serious than entering the United States without the federal government's permission.”

In response, several local jurisdictions voted to limit their agreements with ICE. California has passed laws restricting coordination with ICE, including one that allows immigrants in custody to opt out of interviews with federal agents.

The Obama administration ultimately replaced Secure Communities with another program known as the Priority Enforcement Program, and announced a shift toward focusing deportations on criminal offenders.

The number of people deported fell in fiscal 2015, but the portion convicted of a crime rose. According to government statistics, 86 percent of deportees that year were what the government considers first priority, including border crossers, convicted felons and gang members.

Given the resistance from some local governments to collaborate with ICE, it may be difficult for Trump to get buy-in to revive the 287g field program that gave local police officers immigration authority.

“A number of cities throughout the United States have already declared that they are not interested in doing ICE’s job for them,” García Hernández said.

“If President Trump is going to try to turn local police officers into immigration officers, to implement his mass deportation policies, that is not something that Phoenix Police Department is going to participate in,” Phoenix Mayor Greg Stanton told KJZZ.

What remains to be seen is whether Trump will make good on a threat to withhold federal funds from localities that do not cooperate with federal immigration enforcement.

Immigrant: 'Waiting and Waiting' for Dreaded Knock on Door Arizona Woman Deported To Mexico Under New Trump Rule Southern Arizonans with Connections to Trump, Pence
By posting comments, you agree to our
AZPM encourages comments, but comments that contain profanity, unrelated information, threats, libel, defamatory statements, obscenities, pornography or that violate the law are not allowed. Comments that promote commercial products or services are not allowed. Comments in violation of this policy will be removed. Continued posting of comments that violate this policy will result in the commenter being banned from the site.