Tucson Needs Thousands of Blankets for the Homeless

Emergency blankets the city requested were sent to other cities hit by natural disasters. by Vanessa Barchfield TWEET SHARE 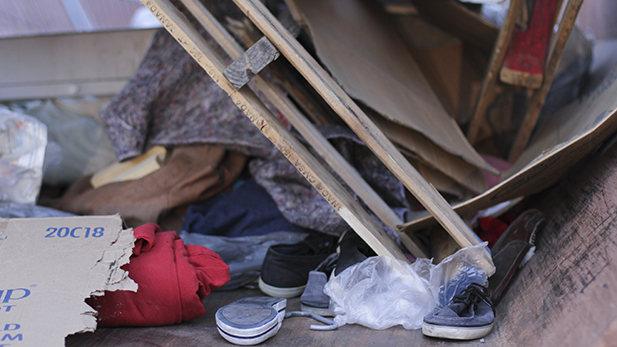 Clothing, wood scraps and blankets are pictured in a City of Tucson dumpster on Friday, March 13, 2015. The trash was from the deconstruction of the Safe Park protest in downtown Tucson.
Mariana Dale, AZPM

The city of Tucson is asking for donations of blankets and sleeping bags for the homeless.

Officials ordered 10,000 blankets from the federal government to distribute to its homeless population, but those emergency blankets were diverted to other cities that have been hit by natural disasters in recent months.

That means right now, Tucson has no blankets to give out when temperatures plunge at night, said Settle Madden, who works with the Tucson Pima Collaboration to End Homelessness.

"Unsheltered homeless people will be much colder than usual," she said. "And there’s a possibility that there would be illnesses and possibly even death. So we want to do everything we can to make sure that doesn’t happen. "

She said blankets of all kinds will be accepted and donations can be made at all City Ward Council offices and a few other sites, listed below.

Donated blankets and sleeping bags can be dropped off at the following locations:

Blankets for Tucson Homeless Coming Earlier Than Expected Tucson Homeless Count Shows 45% Decline in Last Decade Visit Camp Bravo, a Base for Homeless Vets in Tucson
By posting comments, you agree to our
AZPM encourages comments, but comments that contain profanity, unrelated information, threats, libel, defamatory statements, obscenities, pornography or that violate the law are not allowed. Comments that promote commercial products or services are not allowed. Comments in violation of this policy will be removed. Continued posting of comments that violate this policy will result in the commenter being banned from the site.