× STREAMCHILDREN OF THE HOLOCAUST: Watch our preview and discussion of AZPM's upcoming project, Children of the Holocaust.
/ Modified feb 20, 2017 2:29 p.m.

The Southern Arizona Republican will take public questions on Thursday in Sahuarita. by Christopher Conover Tweet 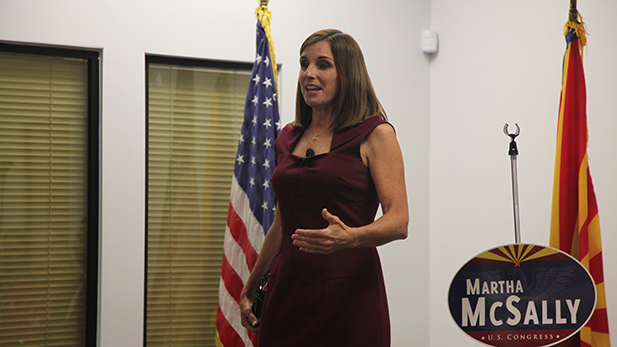 Rep. Martha McSally, R-Tucson, will take part in a Thursday town hall meeting in Sahuarita, according to her office.

McSally has held two telephone town halls this year. Thursday’s meeting is scheduled to be 90 minutes of audience questions.

The event at the Good Shepherd United Church of Christ in Sahuarita is sponsored by the Green Valley News and the Sahuarita Sun. It begins at 4:00 P.M.

Raucous Crowd for McSally's First Town Hall of Year Giffords to Members of Congress: Meet With Your Constituents Group Hopes to Get Zoo Tax in Front of Voters
By posting comments, you agree to our
AZPM encourages comments, but comments that contain profanity, unrelated information, threats, libel, defamatory statements, obscenities, pornography or that violate the law are not allowed. Comments that promote commercial products or services are not allowed. Comments in violation of this policy will be removed. Continued posting of comments that violate this policy will result in the commenter being banned from the site.