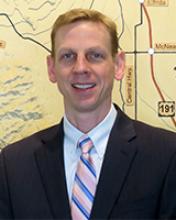 Gilligan said his first goal is to ensure his transition goes as smoothly as possible, and that includes building a solid working relationship with the Cochise County Board of Supervisors.

The county's three superintendents were all elected to four-year terms in November.

“We’ve got to iron out a strategy for those four years," he said. "It’s budget season, so we’ve got to fully establish our budget for the next fiscal year. And we’re also in the process of recruiting some key positions in the county.”

Gilligan said the county must address water and economic issues and plan for a population that is skewing older as time passes.

He notes a big positive in his job is that projections show an increase in the area's economy and growth in tax revenues for the coming fiscal year.

Cochise County Targeted in Mail Theft Cochise County Home Sales at 12-Year Best in 2016 Cochise County Ranchers Use Radios to Get Help on Border
By posting comments, you agree to our
AZPM encourages comments, but comments that contain profanity, unrelated information, threats, libel, defamatory statements, obscenities, pornography or that violate the law are not allowed. Comments that promote commercial products or services are not allowed. Comments in violation of this policy will be removed. Continued posting of comments that violate this policy will result in the commenter being banned from the site.