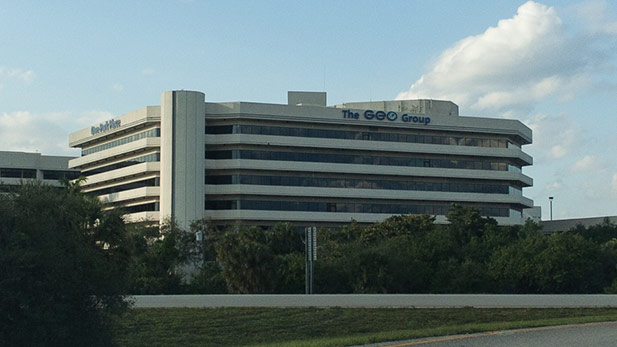 The Geo Group reported higher profits and expressed its intention to bid on future Immigration and Customs Enforcement contracts.
Via Wikimedia Commons

A private prison company with three facilities in Arizona reported a big jump in profits under President Donald Trump.

The Geo Group cited more detentions by Immigration and Customs Enforcement (ICE) as the cause for higher profits for the company. CEO George Zooley said the first quarter was strong and there’s more to come.

“We are very pleased to have been awarded a new contract by ICE in April of this year for the development and operation of a new, company-owned, 1,000-bed detention facility.”

Zooley told investors in a conference call this week the new facility in Texas will house immigration detainees.

The Geo Group holds the largest private-prison contract with the federal government to hold immigrants.

“Our revenues for the first quarter of 2017 increased to approximately $551 million, from $510 million a year ago,” said Senior Vice President Brian Evans.

The federal budget - passed by the U.S. House and going to the Senate - calls for 5,000 more beds to detain immigrants. Geo Group officials said they plan to bid on those additional beds.

Low Staffing Levels at Arizona Prisons Could Lead to Big Fines Migrant Comic Book Tells Stories of Those Who Cross the Border Border Patrol Raids Humanitarian Aid Camp
By posting comments, you agree to our
AZPM encourages comments, but comments that contain profanity, unrelated information, threats, libel, defamatory statements, obscenities, pornography or that violate the law are not allowed. Comments that promote commercial products or services are not allowed. Comments in violation of this policy will be removed. Continued posting of comments that violate this policy will result in the commenter being banned from the site.