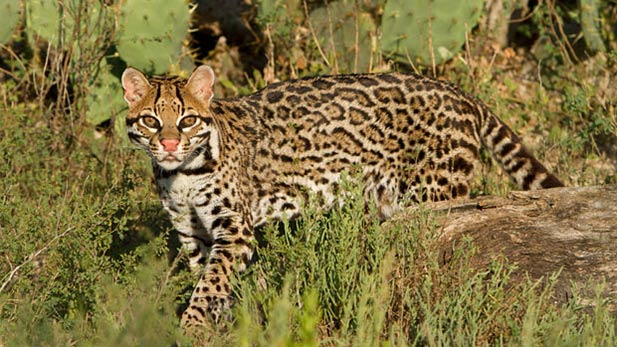 A study will look at whether a predator-prevention program threatens ocelots in Arizona and Texas.
Seth Patterson, U.S. Fish and Wildlife

The federal government has agreed to study how to prevent its predator-elimination program from inadvertently killing an endangered wild cat living in Arizona and Texas.

The settlement announced Tuesday between the Department of Agriculture and two environmental groups requires the department to analyze the effects of its predator program in Arizona on ocelots. The brown-spotted cat can grow up to 4 feet long and weigh 35 pounds.

The program uses traps, snares and poisons such as cyanide to kill coyotes, bobcats, bears and other predators. The agency killed 2.7 million animals last year, including 475,000 in Texas and nearly 4,600 in Arizona.

There are fewer than 100 ocelots in the two states, and they've been listed as endangered since 1982. They also live in Mexico and central America.

Episode 306: Face to Face With a Jaguar Wildlife Officials Pleased With Growing Mexican Gray Wolf Count Jaguar Photographed in Huachuca Mountains, a First
By posting comments, you agree to our
AZPM encourages comments, but comments that contain profanity, unrelated information, threats, libel, defamatory statements, obscenities, pornography or that violate the law are not allowed. Comments that promote commercial products or services are not allowed. Comments in violation of this policy will be removed. Continued posting of comments that violate this policy will result in the commenter being banned from the site.