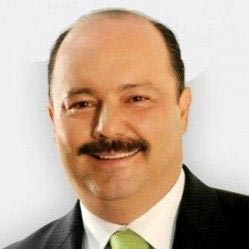 Cesar Duarte, who served under President Enrique Peña Nieto’s Institutional Revolutionary Party from 2010 to 2016, is wanted on state and federal graft charges. His successor Javier Corral, of the opposition National Action Party, has said Duarte applied for political asylum in El Paso, Texas.

In December, authorities in Chihuahua detained a former top Institutional Revolutionary Party official who served during Duarte’s tenure, Alejandro Gutierrez, accusing him of participating in a scheme to divert the equivalent of about $12 million in public funds for political campaigning, local media reported. Corral had called on federal authorities to seek the extradition of Duarte.

Duarte is one of several ruling party ex-governors believed to have fled the country following accusations of corruption. Former Gov. Javier Duarte of Veracruz, who is not related to Cesar Duarte, was arrested in Guatemala in April. Javier Duarte has been linked to real-estate investments in the U.S., including a house in Scottsdale.

New Travel Warning Puts Mexican States in Most Dangerous Ranking Sonora Better than Most Mexican States in Corruption Index Judge OKs El Chapo Guzman's Extradition; Appeal Expected
By posting comments, you agree to our
AZPM encourages comments, but comments that contain profanity, unrelated information, threats, libel, defamatory statements, obscenities, pornography or that violate the law are not allowed. Comments that promote commercial products or services are not allowed. Comments in violation of this policy will be removed. Continued posting of comments that violate this policy will result in the commenter being banned from the site.