Hear how one student's fascination with yeast and sugars turned into three years of award-winning research at the Sonoran Science Academy. by Matthew Felix Tweet 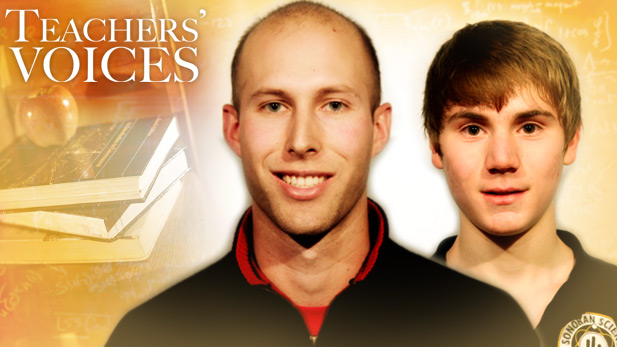 Since the 7th grade, Stan Palasek has been fascinated by the metabolic processes of yeasts and sugars.

Mr. Hobbins began working with Stan on weekends which eventually led to the creation of an Advanced Research Methods class that allowed Stan to dedicate an entire class to his project while working with fellow researchers at the University of Arizona.

"I think the key to being motivated is to find something about it that you really care about. I care about math and just seeing a system and finding an equation that models it is really exciting to me," Palasek said.

On this week's Teachers' Voices, Stan begins by explaining how the competitive spirit at science fairs continues to motivate him.

(Funding for the production of Teachers' Voices is provided by Wells Fargo and the University of Arizona College of Education. The series is produced by Matt Felix for Arizona Spotlight.)

“Gabby Giffords: Won’t Back Down” is a journey of healing from gun violence. "Chasing the Ghost Bear: On the Trail of America’s Lost Super Beast" with author Mike Stark. Artist Michael Moore and the natural world in charcoal.
By posting comments, you agree to our
AZPM encourages comments, but comments that contain profanity, unrelated information, threats, libel, defamatory statements, obscenities, pornography or that violate the law are not allowed. Comments that promote commercial products or services are not allowed. Comments in violation of this policy will be removed. Continued posting of comments that violate this policy will result in the commenter being banned from the site.