Taking Back the Night in a Year of #MeToo

Ripples from the national movement were felt at an annual Tucson event, where hundreds marched to end sexual violence. by Laura Markowitz Tweet 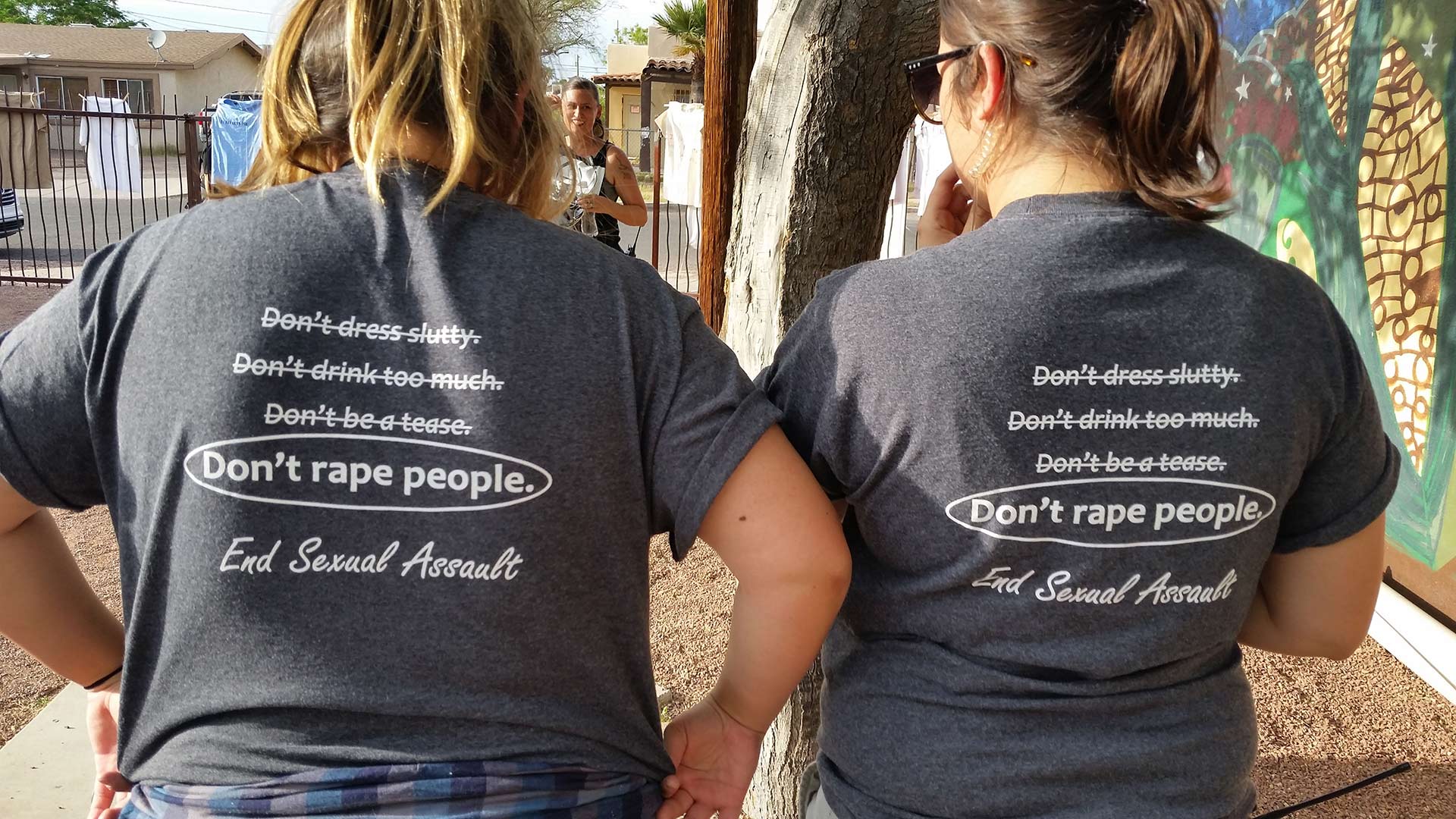 Participants in the 2018 "Take Back the Night" event in Tucson.
Laura Markowitz

Since last October, the topic of sexual violence against women grabbed the headlines and dominated social media. High-profile men in entertainment, the media, politics and other professions were accused of raping, sexually harassing and molesting their female employees and colleagues. Here in Tucson, some of the ripples from the #MeToo movement were felt at the annual Take Back the Night event.

On a warm evening in April, hundreds of people turn out for the annual Take Back the Night event. The courtyard of the YWCA’s House of Neighborly Service, in South Tucson, is filled with information tables staffed by Emerge! Center Against Domestic Violence, Pima County Attorney’s Office, Southern Arizona Center Against Sexual Violence and more. Hand-painted T-shirts hang on the fence around the community center, with slogans that read, “No Means No!” and “Men Can Stop Men’s Violence Against Women.”

This is Tucson’s 39th Take Back the Night rally and march. According to organizers, the originators of that first march declared: “The phrase ‘Take Back the Night’ symbolizes our assertion that women in this community have a right to be safe in this community, day or night, at home or in the streets. By marching together we will declare our intention to make the night safe for all women.”

After the speeches, the participants march through the neighborhood with signs and gather together to listen to stories from survivors of sexual violence. This annual ritual has become an opportunity for personal healing for some, and a chance to help other victims know they are not alone. For many, it echoes what they’ve experienced with the #MeToo movement. 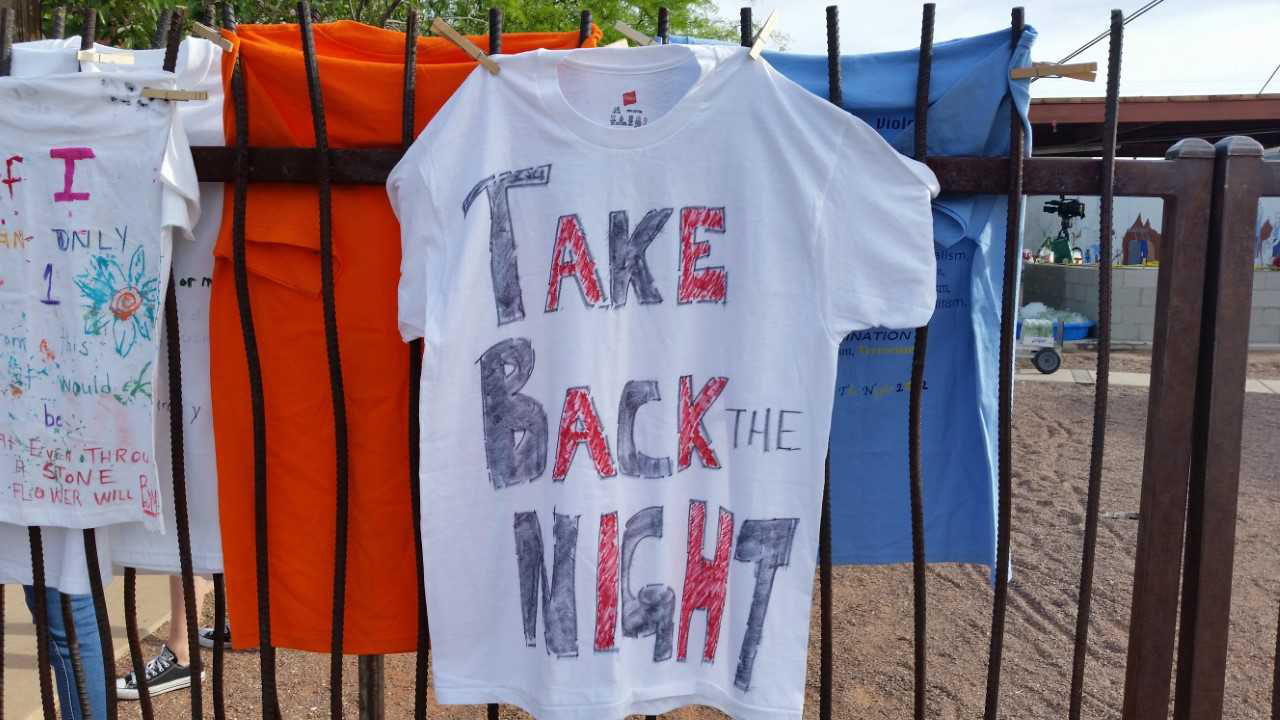 Hand-painted T-shirts hanging on the fence of the House of Neighborly Service, the location for the 2018 "Take Back the Night" event in Tucson.
Laura Markowitz

“Leading us to the platform that we have today were countless numbers of women – and some men – have come forward with their own stories under the #MeToo movement, calling for an end to sexual violence and rape culture,” says one of the emcees from the stage.

The #MeToo movement started in 2006, but it went viral in October of 2017, after actresses, news anchors and other well-known women – and some men – came out in the media about their experiences of sexual violence in the workplace. Their stories inspired a flood of “Me Too” stories on social media.

One in five women are raped during their lifetime, according to the National Sexual Violence Resource Center.

“More people have come out and shared their stories,” says a woman named Gloria, who doesn’t want to give her last name. She’s marching with her daughter. “I think they felt empowered by knowing they were not the only ones."

Gloria works in retail. She says sexual harassment is so commonplace that it’s not even considered worth addressing in her workplace. She was surprised to learn about friends who had similar experiences, and to learn about one who had been keeping a difficult secret for decades.

“I have a friend who said she was molested since she was small, by family members,” says Gloria. “My friend posted her story on Facebook. She never said anything about it before, because it was, you know, bad. But when she saw it happened to a lot of people then she was able to share. I never knew anything about it. She had the secret for, gosh, 40 or 50 years.”

One in five women are raped during their lifetime, according to the National Sexual Violence Resource Center. For women of color, the odds of being victimized are even higher. The Department of Justice found that more than half of Native American women and girls have been victims of sexual violence. 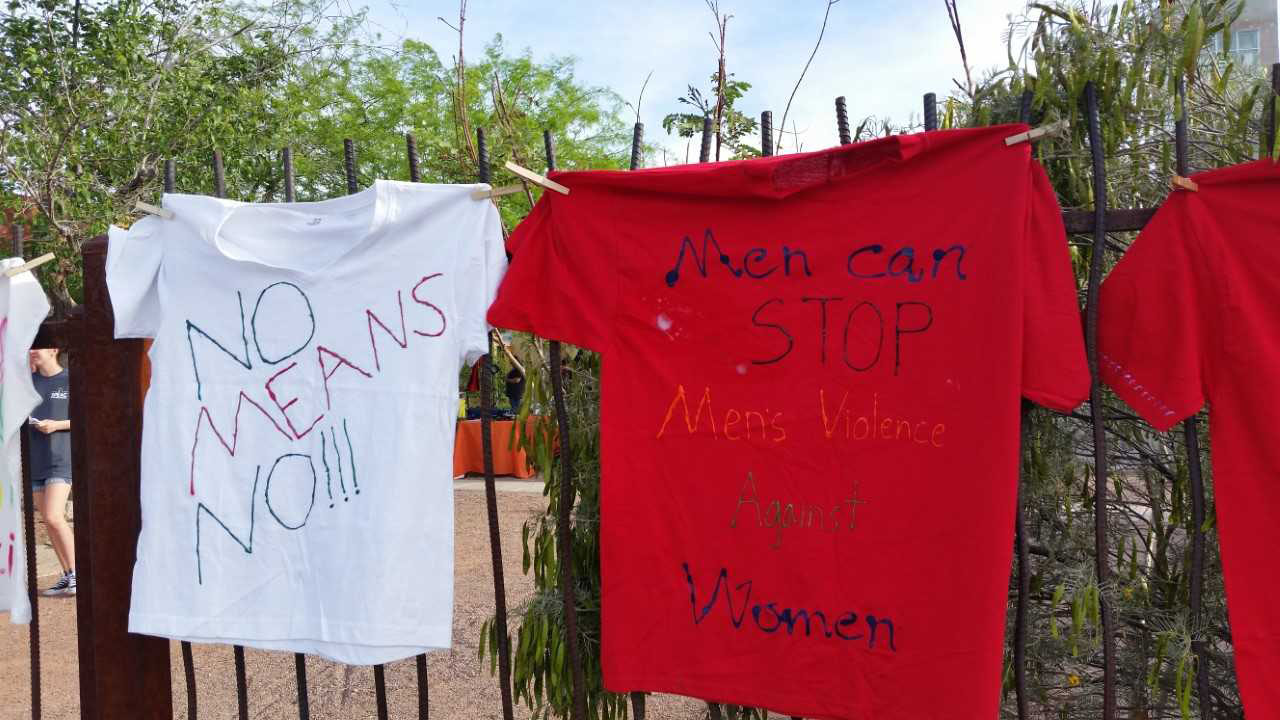 The Clothesline Project designed t-shirts to bear witness to the experience of domestic abuse in our community.
Laura Markowitz

These statistics aren’t new. What’s new is that more people are willing to talk about it, says Sat Bir Kar Khalsa, a co-founder of the Culture of Peace Alliance, which is a fiscal sponsor of this year’s Take Back the Night event.

“We’ve been longing for that for so long,” she says. “The #MeToo movement has really propelled women’s voices to the forefront.”

Women’s voices are not the only ones at the forefront of this year’s Take Back the Night event. Mayor Jonathan Rothschild addresses the crowd:

“The real focus has to be on assuring that the perpetrators are stopped and that there’s a zero tolerance for the perpetrators,” says Rothschild, who is interrupted by an audience member, who calls out skeptically, “Really?” The mayor continues: “By marching tonight you’re coming together to tell people this behavior has to stop. This behavior is not acceptable.”

"It’s not just the men who have been caught for a crime. All of us need to deeply reflect and internally look at the ways in which patriarchy exists for all of us." – Timo Padilla

The behaviors of sexual violence occur on a continuum, from verbal harassment, to molestation, to rape. Timoteio Padilla, in his third year as a co-chair of Take Back the Night, says the target audience should not just be men who have been prosecuted for sexual violence.

“It’s not just the men who have been caught for a crime. All of us need to deeply reflect and internally look at the ways in which patriarchy exists for all of us,” he says.

Padilla is one of the founders of the Bruv Luv Collective. “We’re a grassroots collective of men — majority men of color — that are looking to organize and connect with other men in the community, to look internally about what our role is of how we participate, and contribute, and collude within this patriarchal system.”

"I’m guilty of not speaking out about it. I’ve also told guys to leave women alone..." – Isaac Durgin

Bruv Luv started four years ago. The group meets monthly to examine the ways rape culture is perpetuated, and how participants can take responsibility for creating a culture of consent. As he describes it, it’s “that discomfort that comes up, like, when there’s friend who’s a problem and has a pattern of doing things. And finding the right language to talk to them about it where its productive and not just isolating and pushing them away, because then they’ll just leave. And then they’ll continue to perpetuate elsewhere.” 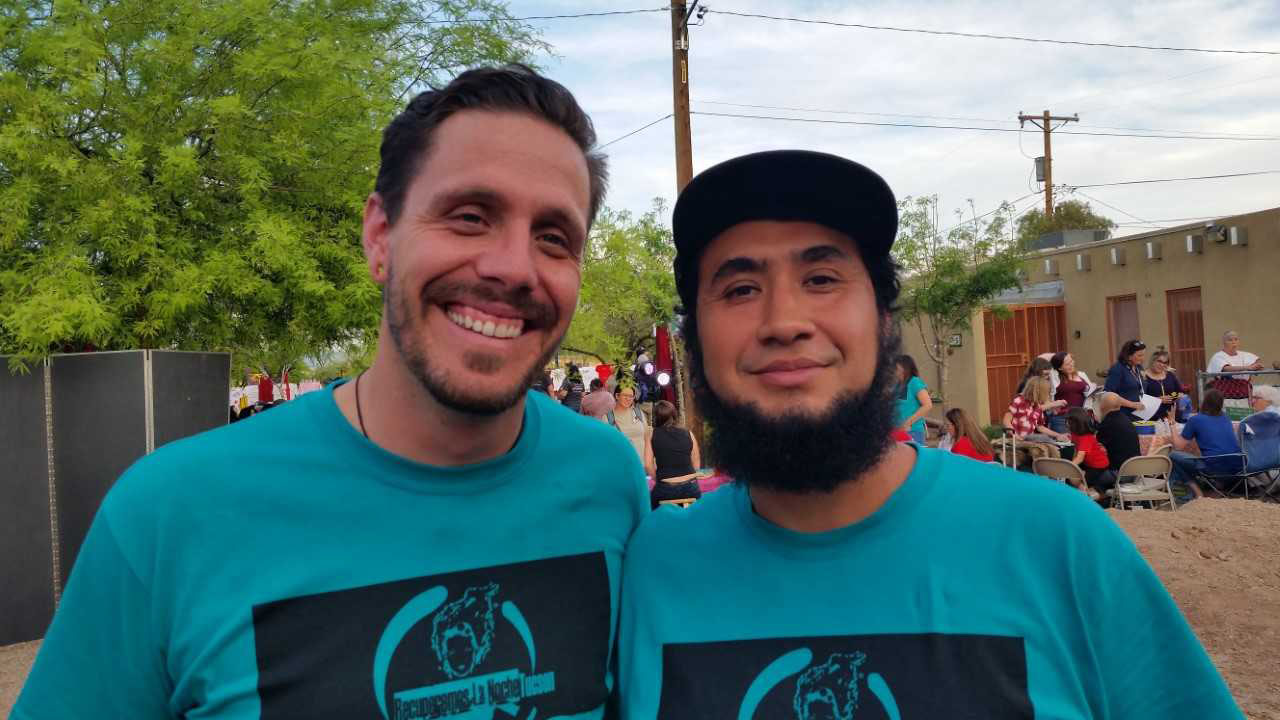 Another participant at the Take Back the Night event, Isaac Durgin, isn’t a Bruv Luv member, but he agrees it can be hard to know how to challenge casual sexism.

“I feel like it’s so ingrained in society,” says Durgin. “I’m guilty of not speaking out about it. I’ve also told guys to leave women alone, like in the parking lot of Circle K. Why do guys feel we can do that to women, and then get mad when they don’t reciprocate, or they don’t talk back to you? That just makes no sense to me.”

What is the most effective thing he’s done to raise awareness among his male peers about sexism?

“Oh, man, I’m going to throw myself under the bus!” he says. “I don’t think I’ve done enough, actually. You know, it’s something that I have to do more of. And I feel like my friends — my homeys — are ‘woke,’ but even in those circles you still hear about it, find out about it, even see it, sometimes. But for me, it’s just trying to call it out any time. Any harassment, anything like that — to speak out on it.” Durgin says he is close to the women in his life, and he doesn’t want to see them hurt by sexual violence, so he feels a responsibility to speak out.

Isaac Durgin and Timo Padilla both believe violence against women is not a woman’s problem; it’s a man’s problem. That is why Padilla believes the work to change the patriarchal system and end sexual violence has to begin with men challenging their patriarchal privilege. Bruv Luv gives him hope. He says men can come to the realization that this isn’t work to do for the sake of women. It’s in men’s own self-interest to create a society where everyone can be safe.

Despite Past Reforms, Native Women Face High Rates of Crime The Effect of #MeToo at the Arizona Capitol #metoo: Empowerment Through Empathy
By posting comments, you agree to our
AZPM encourages comments, but comments that contain profanity, unrelated information, threats, libel, defamatory statements, obscenities, pornography or that violate the law are not allowed. Comments that promote commercial products or services are not allowed. Comments in violation of this policy will be removed. Continued posting of comments that violate this policy will result in the commenter being banned from the site.