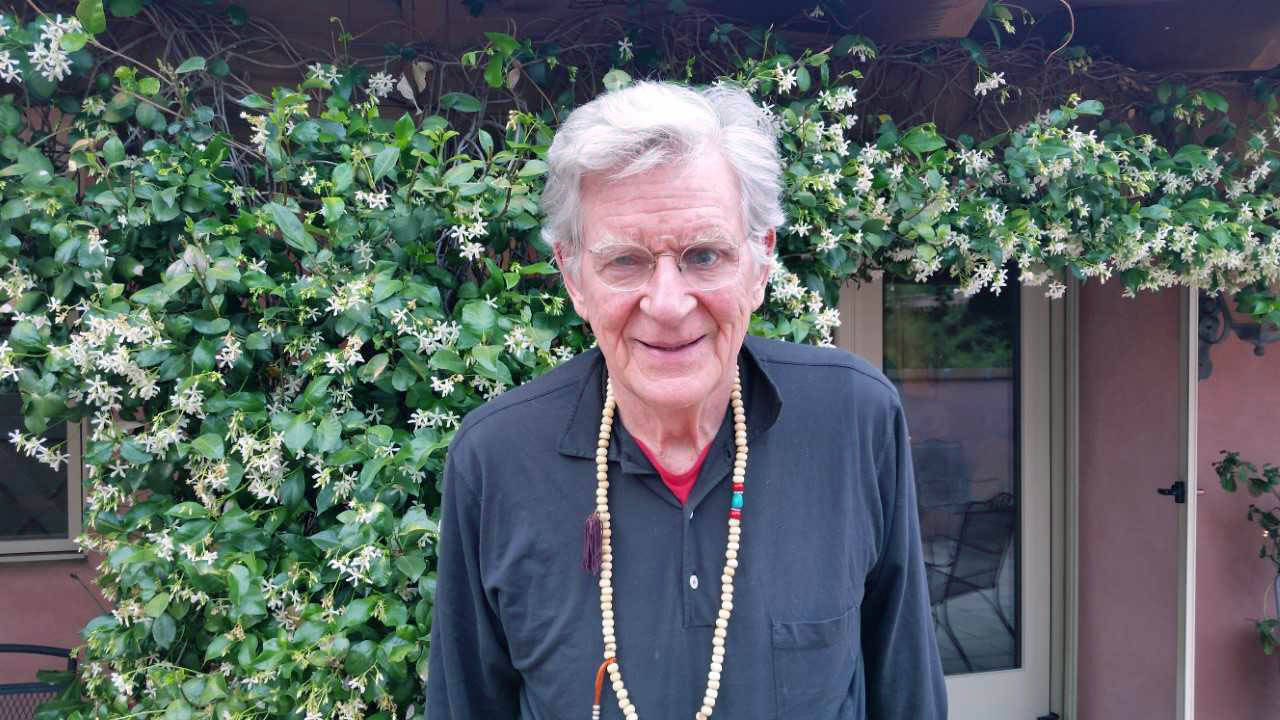 An Interview with Buddhist Scholar Robert Thurman by Laura Markowitz

“People get so grim about Buddhism,” he told the audience at the University of Arizona College of Social and Behavioral Sciences, where he was a guest speaker. “They think to be Buddhist they have to stare at a wall. What I really like to talk about is how to have more fun, and being enlightened is more fun.”

Thurman has been thinking about enlightenment for a long time. At the age of 23, he lost the sight in one of his eyes during an accident, so he headed to India looking for insight.

"People get so grim about Buddhism. They think to be Buddhist they have to stare at a wall."

“I’ve known the Dalai Lama since 1964,” said Thurman, during an interview after his lecture. “He’s a very close friend, and also a teacher, and also I admire him very much.”

In 1987, Thurman, actor Richard Gere and composed Philip Glass co-founded Tibet House, which is the Dalai Lama’s cultural center in the U.S.

In 1965, the Dalai Lama ordained Thurman as a Buddhist monk. Thurman was the first American to become a monk in the Tibetan Buddhist tradition. He learned the Tibetan and Sanskrit languages, and two years later he left the monkhood to marry former fashion model Nena von Schlebrugge. They have five children, one of whom is actress Uma Thurman.

“When I finished my PhD, my original teacher – the late, venerable Geshe Wangyal – and His Holiness the Dalai Lama ganged up on me,” remembers Thurman. “They said, ‘Okay you can teach in schools and do your thing – you’re a professor. But don’t just do that. You have to translate the whole canon into English.’ That’s 4,000 books! I said, ‘Oh, thanks a lot. That’s great!’ They said, ‘Of course, you won’t get it all done. You’ll just get it started. You’ll create the institutions and in a few generations it will be done.’”

The Dalai Lama remembered that 30 years later, when he met Lee Bollinger, the president of Columbia University. That’s where Thurman teaches. Thurman recalls: “He said, ‘Well, Lee, you know, Professor Thurman needs at least three lifetimes to finish his project.’ So then Bollinger, who is a very wonderful, intelligent man, says, ‘Oh, that’s very inspiring. That’s great, your Holiness. But the problem is we don’t have that system [of tenure] here at Columbia.’ I was too shy to say, ‘What do you mean, I couldn’t reincarnate into my professorship?!’ ” 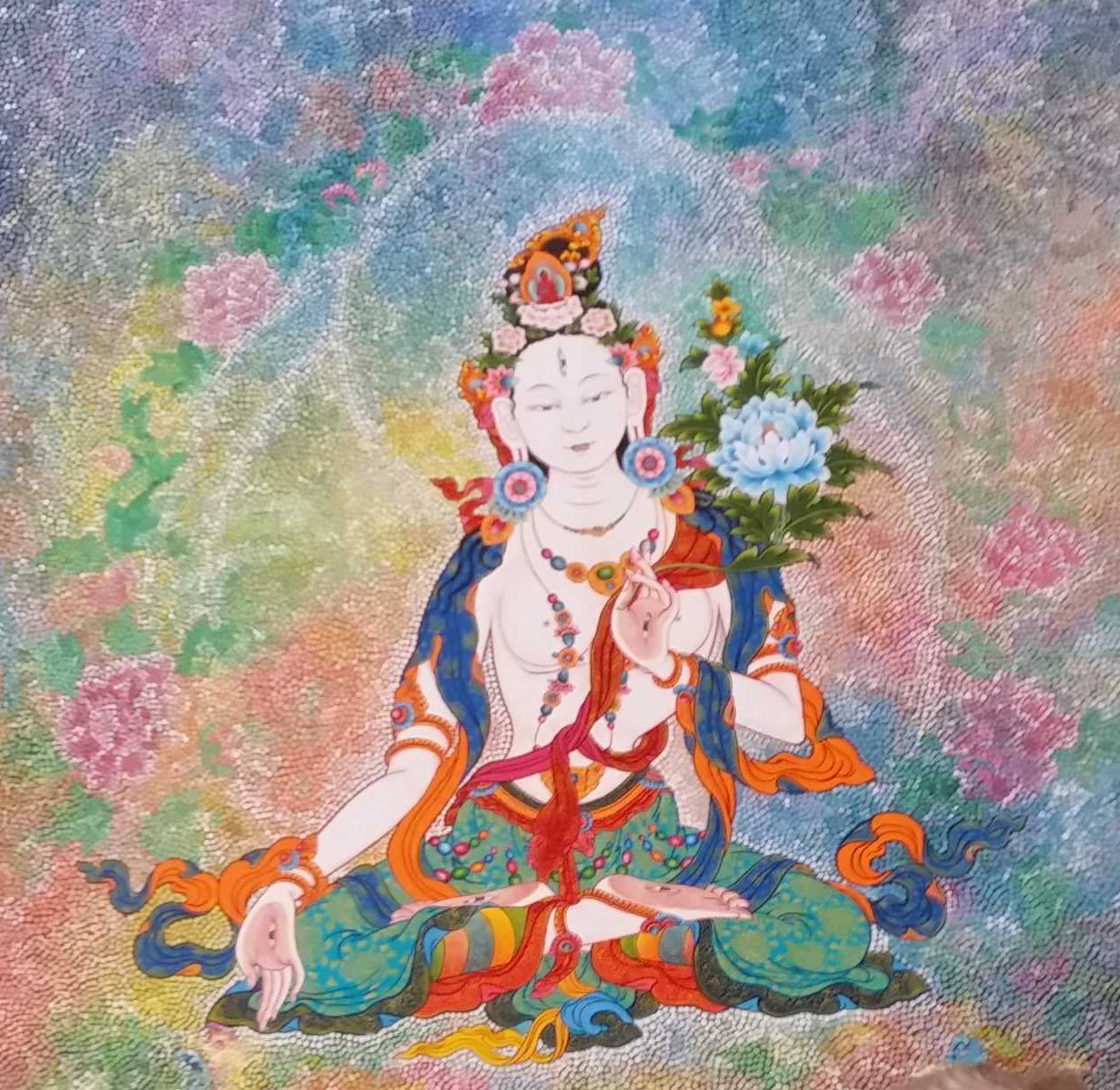 Buddhists believe we’re all reborn infinite times. “We’re completely submerged in infinity,” says Thurman. By that he means that we all live finite lifetimes because we die, but because we are infinitely reborn, we are also infinite. “You can’t say infinity can’t permeate our finitude because otherwise it wouldn’t be infinite! Finitude and infinity merge actually, in a person.”

The Buddha taught that what follows us from lifetime to lifetime isn’t a permanent soul or a self; it’s karma. Karma is the law of causation – that if you do good, then you create future goodTibetan Buddhist scholar and translator Robert Thurman thinks Buddhist should have more fun.

“Buddhists from ancient times didn’t have a problem about life on other planets,” says Thurman, who is a Star Trek fan, and also loves James Cameron’s science fiction film Avatar. “Of course there are billions! And they say we could die and be reborn on another human planet someplace else, which could be really fun. We could have a tail, and be blue, and live in a hammock! That could be really fun! There might be worlds like that.”

"Buddhists from ancient times … say we could die and be reborn on another human planet, which could be really fun."

Because of karma, our current lives are reflections of the good and bad deeds from past lives, according to Buddhism. Thurman says that’s why opportunities to create good karma by doing acts of kindness are so important. They actually set you up to be reborn into favorable circumstances. 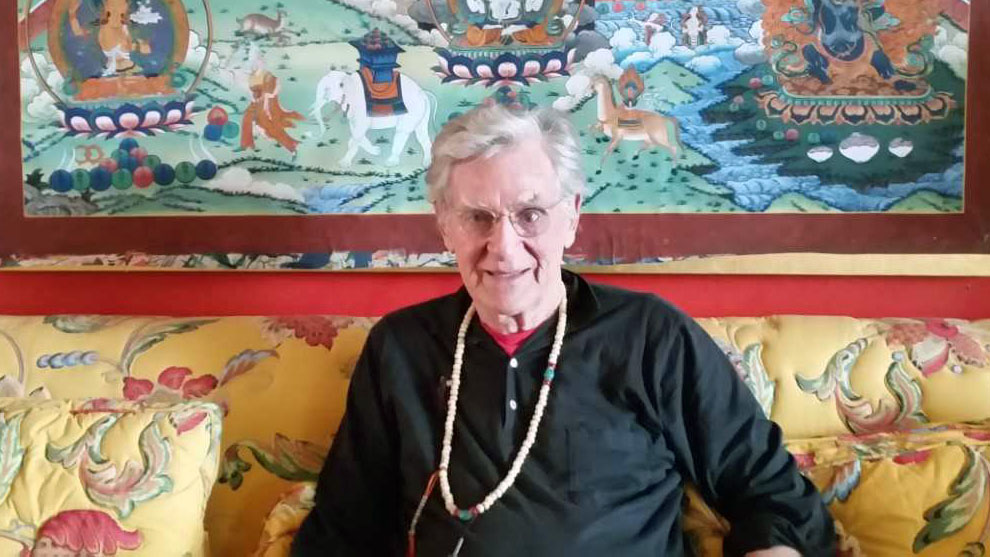 “That’s an amazing idea!” he says. “A beggar does you a much greater service than anyone you can hire – if you give to the beggar. Because the only reason you give to a beggar is generosity. You have no other motive. The opening of your heart and your hand gives you huge evolutionary fruition of great wealth in a future life. So that guy is doing you an enormous evolutionary service just by being there with his bowl.”

"The opening of your heart and your hand gives you huge evolutionary fruition of great wealth in a future life."

A belief in multiple lifetimes changes one’s relationship to the present moment – the ‘now’—according to Robert Thurman. “The Power of Now, by dear friend Eckhart Tolle, has done a lot of help to a lot of people about how it’s very helpful to be more in the moment and not just be constantly ruminating about your disappointments, and your memories, and your anticipations of the future. And to be more alert and alive and aware of what’s going on. You might find more treasures in the moment than you know. I think that’s really wonderful.”

He continues, “But, the ‘now’ for a person who is conditioned by our culture to think life is meaningless, there is no future life, you become nothing at death – which means that essentially, right now, you’re nothing, and if everything becomes too bad you just blow your brains out and you become nothing, and therefore it’s all meaningless and purposeless – that subliminal framework that is inculcated in them by our scientific-materialist culture, the ‘now’ is little bit of a dead moment. So it’s more of only a palliative. It’s a way of getting away from your worries and your lamentations. It’s not deep enough.”

"You might find more treasures in the moment than you know."

What is the alternative? Thurman says: “If you instead realize that what you find in the ‘now’ is everything good, and that the ‘now’ is the seed of your eternal future, then the ‘now’ includes everything beautiful that leads to a positive future.”

The secret to having more fun and being happier, he says, is becoming aware of the river of life and our infinite responsibility to help it flow in a more beautiful way for ourselves and for others. “The ‘now’ is the result of a wonderful effort by all generations past and yourself, even” – because you are the product of your past lives – “so then you suddenly are swimming in an ocean of infinite currents of striving toward love, and goodness, and beauty, and truth. And so your ‘now’ becomes a moment of eternity, rather than a dead zone of nothingness.” 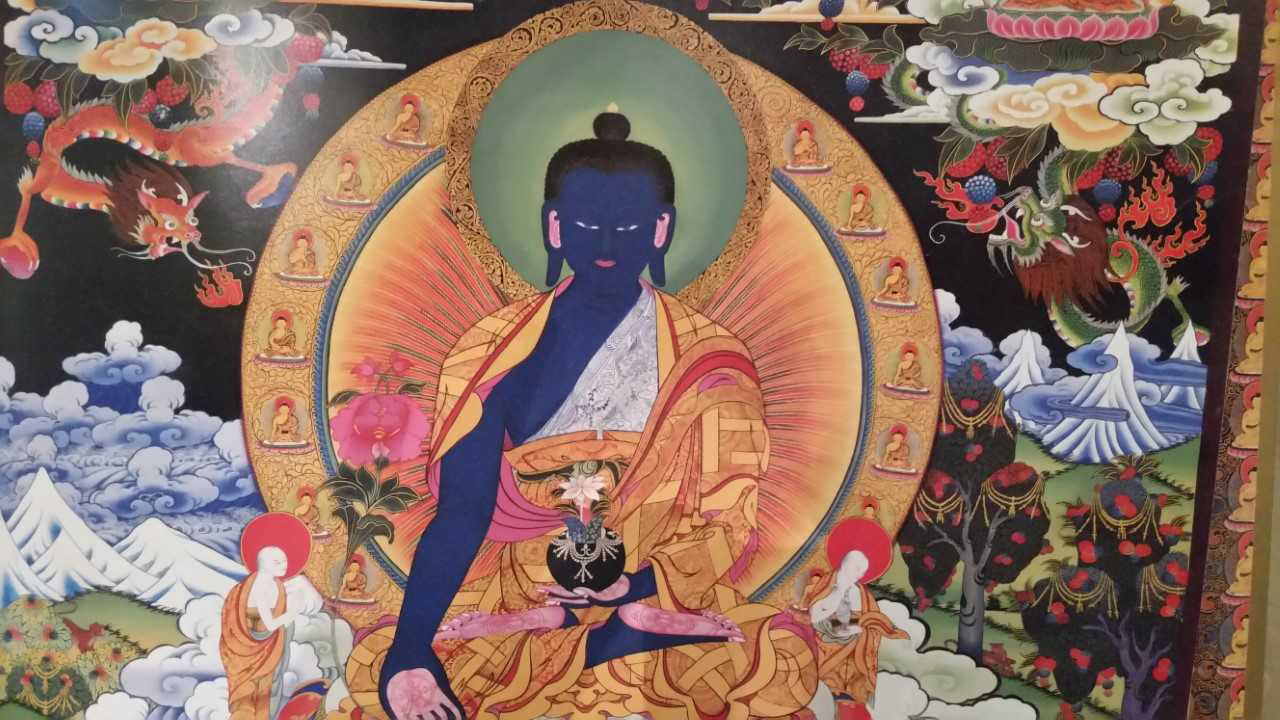 In Tibetan tradition, the Healing Buddha established the Tibetan medical tradition thousands of years ago.

Thurman believes a multiple-lifetime perspective will benefit the planet. “I feel [it’s] the real shift, which gets you away from the recklessness at the heart of materialist culture,” he says. He means when we don’t restrain ourselves from doing something negative, such as polluting the environment, “or saying ‘what the hell,’ and ‘it doesn’t matter because it’s all nothing, finally,’ which leads to our reckless culture which is wrecking the planet.”

Without a belief in rebirth people may believe they can pollute the earth, ignore injustice, and do harm to others because it ultimately won’t affect them; in a few decades, they’ll be dead and therefore finished forever with the planet and other people.

On the other hand, says Thurman, with a belief in rebirth, you assume you’ll be coming back. “To the absolute core, you have enlightened self-interest that everything go – even if’s just a little better – a little better,” says Thurman, because you’ll have to live here again and again and again. He adds: “The power of now is intensified by the power of a living, breathing eternity.”

"You have enlightened self-interest that everything go … a little better."

Thurman’s long years of meditation practice help him to be awake in the present moment. He also has what he calls a “death practice.”

“I try to do the practice of thinking about death all the time,” he says. “Talk about the power of now! The biggest ‘now moment of all is the moment of death. I think everyone should be much more mindful of their death, not live in denial of death, and also, not be frightened by it, and not necessarily be gloomed out, either.” 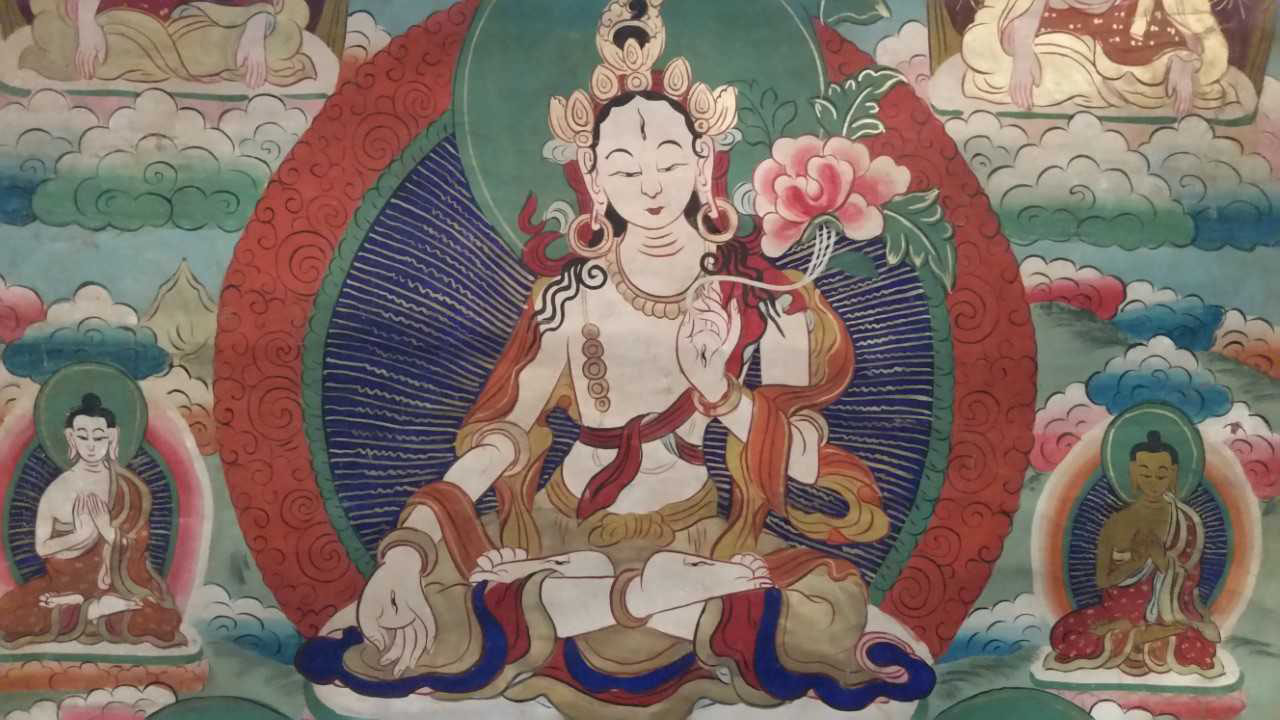 His most popular book is a translation of the Tibetan Book of the Dead. It’s like an ancient Dummy’s Guide to dying and rebirth.

"I try to do the practice of thinking about death all the time. Talk about the power of now!"

What does Robert Thurman think would be a good death? “Well, a good death for me would be if I could have a little more time before that... I actually am not afraid of it but I would regret it. I have things I haven’t finished. And the Dalai Lama ordered me to live to 107, and he promised to live to 113.”

Thurman says that before he dies he’d like to “become more stable at the deep unconscious level of my mind so that I would be sure not to react with terror no matter what happened, and to be fully open to everything – confident that I could be. So that therefore I could be conscious in seeing where else I might like to go. Have a successful ‘womb shot.’ Go to a good mom in a good neighborhood.”

He likes the idea of lucid dying, explaining: “You rise out of your ordinary body [at death] and you can control the situation a little bit. You can surf it. You can’t control it, but you can maneuver, negotiate” where you are reborn. “The ultimate is lucid waking, which is what Buddha does. Lucid living! That would be really good. But I haven’t reached those things, quite. But I have a sense where they are. I feel I will get there. Maybe in six more lives.”

In the meantime, in this lifetime, Thurman has a new book coming out this fall. It’s about having more fun. He says if your pursuit of enlightenment is not making you happy, then you’re not going about it the right way.

Tibetan singing bowls performed by Paul Grady Lee, who was featured in this edition of Arizona Spotlight.

Chris Impey looks "Beyond" Buddhist Sand Mandala First in Southern Arizona From Thailand to Tucson: New Temple in Tucson is Attracting a Variety of People
By posting comments, you agree to our
AZPM encourages comments, but comments that contain profanity, unrelated information, threats, libel, defamatory statements, obscenities, pornography or that violate the law are not allowed. Comments that promote commercial products or services are not allowed. Comments in violation of this policy will be removed. Continued posting of comments that violate this policy will result in the commenter being banned from the site.