The board decided not to accept federal money based on local law enforcement cooperating with federal immigration efforts. by Zac Ziegler and Steve Jess, AZPM Tweet 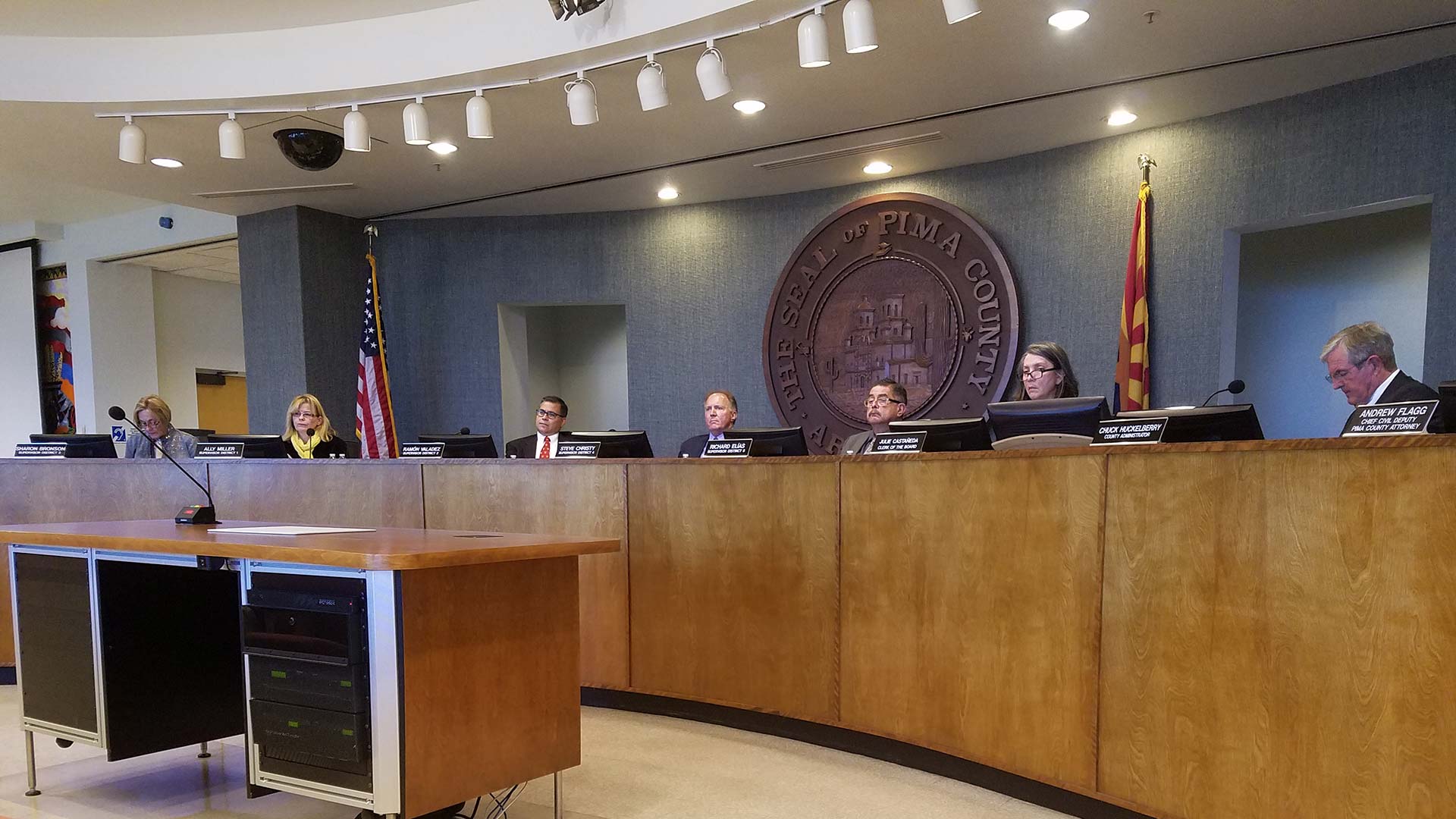 The Pima County Board of Supervisors at a March 20, 2018 meeting.
Zac Ziegler/AZPM

The Pima County Board of Supervisors voted to terminate its acceptance of money from Operation Stonegarden, a federal grant that pays for sheriff's department equipment, overtime and mileage.

The supervisors spent nearly five hours hearing testimony from concerned citizens both in favor of and against accepting money from the program, which requires deputies who are clocked in on Stonegarden time to cooperate with U.S. Border Patrol agents.

Dozens of people signed up to speak before board at the Tuesday meeting. The county has been weighing for months whether to continuing accepting the grant. At times the audience at the morning meeting grew so rowdy that chairman Richard Elias called for a five minute recess in the hope the audience would calm down.

"This vote was despite clear evidence of the public safety value of the program and letters of support from every law enforcement agency head in the county. This was a politically motivated vote that will adversely impact public safety in our county," Pima County Sheriff Mark Napier said in a release Wednesday.

"Nothing about this decision changes our current policies/practices with respect to interaction with our federal law enforcement partners. The Board has the luxury of making political, partisan, and ideologically driven decisions. We do not," Napier added.

Supervisor Ramón Valadez kicked off the Stonegarden debate in February when he decided to retract a vote to approve the grant and added conditions to acceptance.

He decided to vote against continuing the program because he said while Pima County has the most miles of border in Arizona, very little of it is under the jurisdiction of the sheriff.

Valadez said he understood the reason many of those in attendance had spoken vehemently against Operation Stonegarden, chalking it up to the policies of the Trump administration.

"The policy of no tolerance. The policy of separating children from their families. The policy of having no real action on DACA. The present policy that criminalizes asylum seekers. The unrelenting and misplaced faith in the border wall," he said.

At the meeting, Pima County Sheriff's Department Bureau Chief Byron Gwaltney spoke in favor of the grant program, saying the money goes for operations that benefit the county.

Najima Rainey, who identified herself as a member of Black Lives Matter, said Stonegarden encourages the oppression of minorities. "This is a bribe and an invitation to collaborate. And, Sheriff Napier, you won't make us collaborators," she said.

The supervisors did vote to continue accepting another federal law enforcement grant from the High Intensity Drug Trafficking Areas program. That grant is administered by the U.S. Drug Enforcement Administration, and is given to communities outside of the border region.

This story was updated Sept. 5 to include comment from Pima County Sheriff Mark Napier.

Officials Credit Southern Arizona Drug Seizures to Stonegarden Funding Pima County Supes Explain Opposing Votes on Stonegarden Sheriff Criticizes Stonegarden Vote, Says Department to Continue Enforcement
By posting comments, you agree to our
AZPM encourages comments, but comments that contain profanity, unrelated information, threats, libel, defamatory statements, obscenities, pornography or that violate the law are not allowed. Comments that promote commercial products or services are not allowed. Comments in violation of this policy will be removed. Continued posting of comments that violate this policy will result in the commenter being banned from the site.