The Drug War At Home: Gangs Acting As Foot Soldiers For Drug Cartels

In exchange for drug money, U.S. gangs are recruited by Mexican drug cartels to do their dirty work Tweet

Note: This is part five of a five-part series airing this week, courtesy of the Fronteras Project. 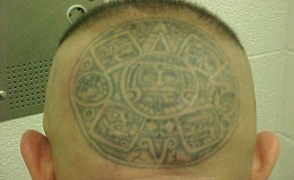 To transport their drugs inside the United States, Mexican drug cartels want a distributor who operates within the black market and is familiar with life on America’s streets. That’s where American gangs step in. The two make a convenient alliance.

In exchange for drug money, the gangs do the cartels’ dirty work. They intimidate, kidnap, steal and murder. The cartel pockets the bulk of the profit from the drug trade, while gang members take most of the heat from law enforcement.

One of the more notorious gangs with ties to Mexican cartels is the “Barrio Azteca.” The group operates mainly in the U.S.-Mexico border region between El Paso, Texas and Ciudad Juarez, Mexico. It was founded in 1986 inside a Texas prison. One of the gang’s principal recruiting grounds is jails and prisons in the state of Texas.

A calling card of the Barrio Azteca is their artwork, inspired by the Aztec Indians from which they take their name.

Inside the El Paso County Detention Facility, deputies post examples of the gang’s artwork on their office walls. The works are black and white pencil drawings of busty women in indigenous headdresses that look a lot like the tattoos etched on the inmates’ bodies.

Sgt. Albert Telles is a jail supervisor at the El Paso detention center. He’s worked in the jail system for 21 years and throughout that time has had his share of encounters with the notorious gang.

“The first encounter I had with the Barrio Aztecas (was when I was feeding) my trustees at the downtown jail,” he said. “One of the trustees said something to the inmate and the inmate punched him right through the bars.” 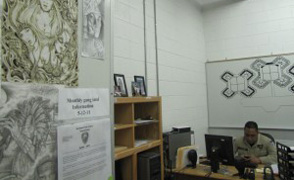 Gang members are known for their violent nature. In the latest indictment against the group, the FBI accused the gang of carrying out the murder of two U.S. citizens last March. One worked for the U.S. consulate, the other was a sheriff’s deputy.

They were ambushed in their car after leaving a birthday party in Ciudad Juarez. Mexican police found the couple’s infant daughter screaming in the backseat. This was a high profile killing where the motive has not been disclosed. It may come out at the upcoming trial.

Drug-related attacks in Mexico happen every day. Telles said sometimes the orders for those hits go through top-level gang members inside U.S. prisons.

“They’ll send a letter to prison, a coded letter. It will probably go to one of the lieutenants,” he said. “He’ll forward it to one of the captains. The captain will review it. He’ll give the say so, yes or no.”

Coded letters and phone calls are the main method of communication between gang members in prison and out in the streets. Hits in Mexico are typically ordered by the cartel first and then carried out by the gang. This is possible because it is a transnational gang – they operate on both sides of the border.

But that’s nothing unusual. Like many border residents, some gang members have close ties to Mexico, be it family or business. Just as they do in Mexico, they commit serious crimes in the United States.

“I saw that they were involved in murder, assaults, extortion and money laundering,” said FBI agent Samantha Mikeska. 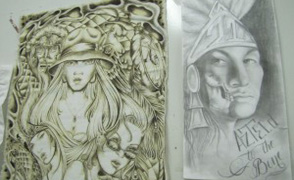 A close-up of a drawing hanging on a wall in an office at the El Paso County Detention Facility.
Mónica Ortiz Uribe

She has investigated the Barrio Azteca for more than a decade, including cases where gang members have kidnapped people in El Paso and taken them to Juarez, where they are killed. Usually those killed are in bad standing with the gang or the drug trafficking organization.

“The cartel will utilize individuals in El Paso, Texas to commit crimes over in Juarez and then come back across the border and also vice versa,” she said.

Gang members are also involved in arms trafficking and human smuggling. According to a report by the intelligence analysis firm Stratfor, Barrio Azteca in the United States will also provide refuge for Mexican cartel members whose lives are threatened south of the border.

Inside the wing housing gang members at the El Paso detention center, Officer Raul Reyes observes inmates in orange striped jump suits wandering about like caged lions. Reyes works for the gang intelligence unit at the jail. He said the gang has a wide spread presence in El Paso. They are also in other Texas cities like Midland and Odessa, as well as southern New Mexico.

In a recent roundup of gang members, Reyes said he was surprised at some of the locations where they were arrested. One was caught in a single family home.

“It was actually a nice neighborhood,” he said. “You would have never expected that you had one of the top Barrio Aztecas living next door to you.”

He said some members held day jobs they used to help cover up their criminal activities. One was an attorney’s assistant, another managed a local bar and one worked at a health clinic.

Nowadays, gangs prefer to stay under the radar. Like most drug trafficking operations inside the United States, they don’t want the public to know their activities. It can be bad for business.

In this video, Detention Officer Ruben Genera explains how gang members communicate with each other while in jail:

Arizona is number 5 growth state in U-Haul rentals Arizona minimum wage going up to $12.80 an hour on Jan. 1 Trump schedules Jan. 15 rally in Arizona
By posting comments, you agree to our
AZPM encourages comments, but comments that contain profanity, unrelated information, threats, libel, defamatory statements, obscenities, pornography or that violate the law are not allowed. Comments that promote commercial products or services are not allowed. Comments in violation of this policy will be removed. Continued posting of comments that violate this policy will result in the commenter being banned from the site.