The Violent Roots of Marijuana

This is part four of Arizona Public Media's five-part series, The Controversy over Cannabis, airing July 11-15 on NPR 89.1FM/1550AM.

1.2 million pounds. That’s how much marijuana the Tucson Sector of the U.S. Customs and Border Patrol seized last year at the border. It broke all previous records.

"Using our infrared, we had detected some individuals carrying what appeared to be marijuana," says David Jimarez, one of 3,500 Border Patrol agents with the Tucson Sector. "I and a couple of agents were moving in to make the interdiction on the marijuana when shots were fired from the drug mules. Since the border patrol has been getting a lot more successful securing the border and managing those risks at the border, the drug cartels have become a little bit more frustrated and a little bit more desperate, and we’ve started to see a little bit more violence attached to these drugs."

Three years ago, there were 117 assaults against Border Patrol agents. Last year, there were 420. 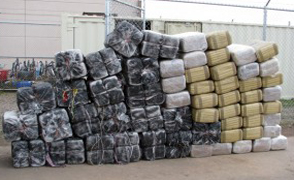 "Putting marijuana or any kind of drugs into the mix does raise the stakes and it makes our jobs a lot more dangerous," says Jimarez.

With new technology and more agents, the Border Patrol is keeping more undocumented immigrants out. That means they can focus on drug smugglers. Jimarez says the majority are transporting marijuana. Mexico produced 3.2 million pounds of marijuana in 2009, according to the Department of Justice.

Half of all illegal drugs in our country come across the Arizona border.

"It’s such a high-risk environment down here that generally most of our search warrants are served by SWAT personnel because of high violence potential," says Todd Smith, a detective with the Arizona Department of Public Safety.

He works on the Counter Narcotics Alliance. It’s a joint task force of local, federal and state agencies. They go after the big marijuana distribution rings. Southern Arizona is one of 28 High Intensity Drug Trafficking Areas in the U.S.

"This is a big business. There’s a lot of money involved in marijuana," echoes Tucson Police Department Lt. Richard Anemone, who also works on the Counter Narcotics Alliance. 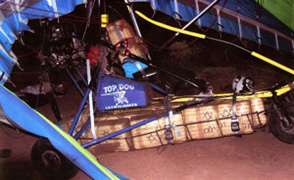 An ultralight aircraft seized in 2008 by agents in Tucson, Arizona. It carried 253 pounds of marijuana.
courtesy of Customs and Border Protection.

He points out that the head of the Sinaloa Cartel, Chapo Guzman, rated higher than Oprah on Forbes’ Magazine’s annual list of the richest people in the world.

"And you’re talking about people dealing with cash," says Anemone. "You see three or four hundred thousand dollars in cash. It’s cash! Tens, twenties. You look at 50, 200 bales of marijuana and you’re just scratching the surface. What about the guys who are getting away?"

This is a view echoed by many pro-cannabis activists. Pima County Attorney Barbara LaWall doesn’t believe it will work.

"If we legalize marijuana, the cartels are not going to go out of business," says LaWall. "They’re not going to suddenly say, ‘Gee I’d better open a legit business now that cannabis is legal.’"

Richard Anemone says the other way to end the drug war is to get people to stop minimizing the harm drugs and drug trafficking inflict on our community.

"When you take that puff, think about how it got in your hand," he says. "You’ve got families associated with this that people are looking to make some money. Often we’ll go in on search warrants and you’ll find kids living in squalor. Mom and Pop are going from marijuana to meth or whatever they’re doing. Kids are being neglected. They’re not going to school. You go in and see human feces. It’s a big area of neglect. When you look at marijuana and you think, ‘It’s not that bad,’ you have to track it. You have to think of how it got there and what the cost of life is to that point. It destroys families."

"We’ve lost police officers in the enforcement of marijuana laws," adds Smith. "There’s corruption associated with it, because of the high money. The violence is there. You see in the news home invasions where they hit the wrong house. It puts everyone at risk."

Seeing the collateral damage and devastating impact of the drug trade on people, communities and even the land of Southern Arizona, some law enforcement officers say their personal views about recreational pot-smoking have changed. One agent said, “Doing bong hits at a party seemed harmless when I was in college. Now, I know better.”

Tune in tomorrow for Part Five of The Controversy over Cannabis to hear experts weigh in on whether marijuana is addictive. It airs on Arizona Spotlight, Friday at 8:30 a.m. and 6 p.m., and again on Saturday at 7 p.m. on KUAZ Radio (89.1 FM/1550 AM).

State sees first tax revenue from recreational marijuana Rural officials say towns are ill-prepared for asylum seekers In Douglas visit, Gov. Doug Ducey calls rising apprehensions a 'man-made crisis' by Biden administriaton
By posting comments, you agree to our
AZPM encourages comments, but comments that contain profanity, unrelated information, threats, libel, defamatory statements, obscenities, pornography or that violate the law are not allowed. Comments that promote commercial products or services are not allowed. Comments in violation of this policy will be removed. Continued posting of comments that violate this policy will result in the commenter being banned from the site.