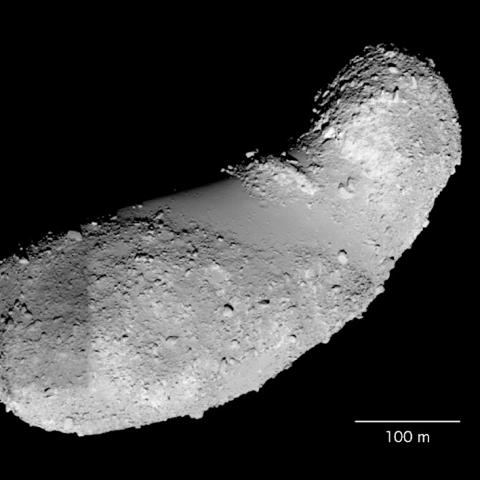 VIEW LARGER Asteroid Itokawa is the much-battered remnant of a larger parent body. The samples provided by JAXA and studied by Jin and Bose came from the feature called the Muses Sea, which is the smooth area in the middle of Itokawa.
Japan Aerospace Exploration Agency

How bodies in the inner solar system like the Earth, the moon and Mars acquired water remains the subject of much debate. Now, samples brought back from asteroid Itokawa might help narrow the possibilities.

The research appears in the journal "Science Advances."

Lab analysis and modeling by an Arizona State University team now suggests that its family of common, silicon-rich asteroids could hold enough water to fill half the Earth's oceans.

The water is neither liquid nor ice, but rather locked up in the crystal matrix of the rock itself. The water also has the same deuterium-to-hydrogen isotope ratio as water on Earth.

The nucleus of deuterium, sometimes called "heavy hydrogen," contains a neutron and a proton, whereas the nucleus of the most common type of hydrogen has only a proton. 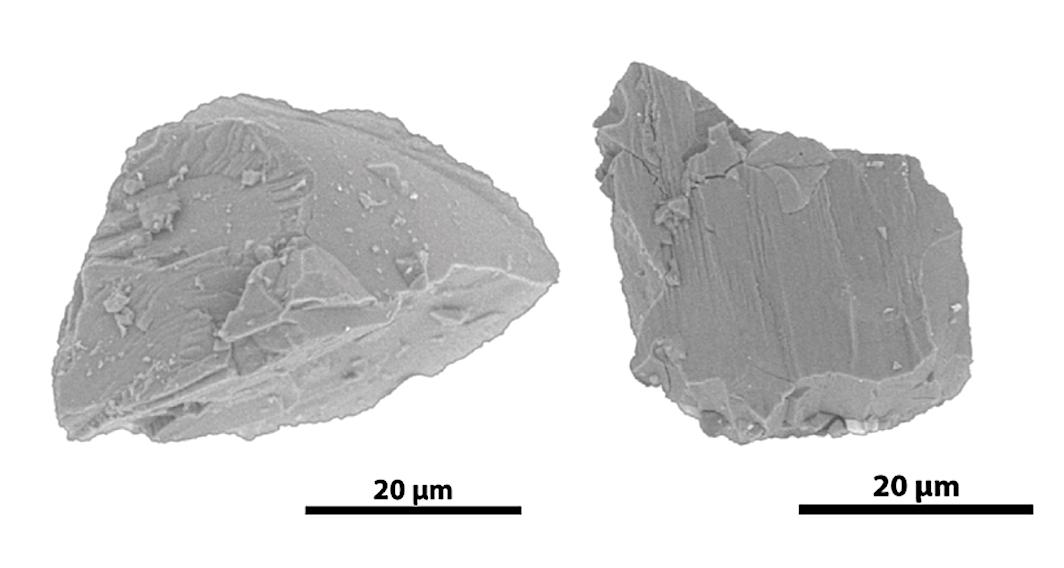 VIEW LARGER The two Itokawa particles studied by Jin and Bose are tiny: by comparison, a human hair is 100 to 500 microns in diameter. ASU's NanoSIMS instrument made it possible to extract information on the particles' water content.
Z. Jin and M. Bose/ASU/JAXA

The isotope ratio match supports the idea that S-type asteroids like Itokawa provided water to the inner solar system and challenges the theory that water arrived later on asteroids or comets from the outer solar system.

S-type asteroids are small bodies — less than 12 miles across — that occur quite commonly in the asteroid belt and originally formed in a region around 0.3 to 3 astronomical units (28-280 million miles) from the sun.

Maitrayee Bose, an isotope cosmochemist at ASU's School of Earth and Space Exploration, co-authored the paper with her postdoc, lead author Ziliang Jin. Bose said the work would not have been possible without a physical sample.

"There's no comparison to what kind of information we can glean from lab analysis and sample return," she said.

Itokawa is an oblong rubble pile measuring roughly 1,800 by 885 by 33 feet. Believed to be the remnant of a 12-mile wide parent body, its 18-month orbit of the sun periodically brings it inside Earth's orbit. At other times, it swings slightly beyond the orbit of Mars.

Hayabusa 2 is currently sampling another near-Earth object: a carbonaceous asteroid called 162173 Ryugu. That mission is slated to return samples to Earth in December 2020.

UA astronomers observe far-away quasar for clues to universe's early years UA researchers receive grant to build new space telescope Arizona reports over 11,000 virus cases, nearly 200 deaths
By posting comments, you agree to our
AZPM encourages comments, but comments that contain profanity, unrelated information, threats, libel, defamatory statements, obscenities, pornography or that violate the law are not allowed. Comments that promote commercial products or services are not allowed. Comments in violation of this policy will be removed. Continued posting of comments that violate this policy will result in the commenter being banned from the site.