Endangered condor may have hatched in Zion National Park 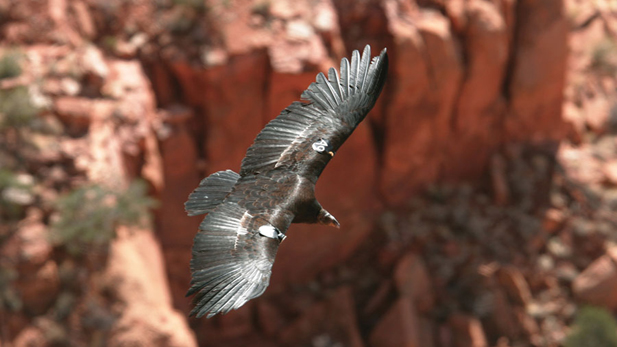 A California condor soars near the Grand Canyon. It is the most endangered bird in North America. It's also the largest, with a wingspan of about nine feet.
Peregrine Fund

Park rangers said they suspect a pair of endangered California condors has hatched their first egg because of behavior changes between the birds.

They estimate the chick to be about 3 weeks old.

If the chick survives, it would be Utah's first successful hatchling. Zion spokeswoman Aly Baltrus says three chicks have been born at the park but have died before they were old enough to fly.

National Park Service records show the condors were the only breeding pair in Zion as of last year. Park rangers estimate they've been together for two years.

California condors are making a comeback in the wild three decades after nearing the brink of extinction.

Endangered Condors to be Released in Northern Arizona Wildfire Added to List of Threats to Condor Population How to prep your pet for the Fourth of July
By posting comments, you agree to our
AZPM encourages comments, but comments that contain profanity, unrelated information, threats, libel, defamatory statements, obscenities, pornography or that violate the law are not allowed. Comments that promote commercial products or services are not allowed. Comments in violation of this policy will be removed. Continued posting of comments that violate this policy will result in the commenter being banned from the site.